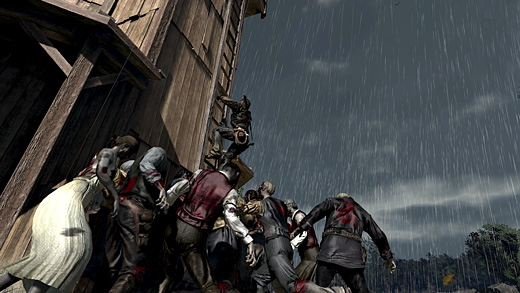 I've been trying to push forward in Red Dead Redemption, but after putting a few hours into it, it still hasn't grabbed me. Great graphics, plenty of content, blah blah blah…

I think the thing for me is that I'm a big story guy. Stories and characters matter to me, and if a game gets off on the wrong foot then it takes a lot for me to stay with it. I know a lot of people say that Redemption really pays off in the end, but it just starts so poorly that I can't find the motivation to continue.

For example, the player does not see John Marston's family when the game starts, so I don't have any idea in my mind of what I'm fighting for. Compounding the problem is that the game follows the typical Rockstar formula where the main character goes on all sorts of crazy adventures and absurd errands, arriving at the end by the most circuitous route possible. It doesn't make sense to me that Marston would seem so at ease and lackadaisical about getting his family out of danger, and almost none of the missions I've been through so far seem to have any direct impact on getting him towards his goal.

I can't get my head into the game, so it's pretty easy to distract myself with other things and feel no rush to get back to it. However, I downloaded the Undead Nightmare DLC before even starting the main campaign, so I figured I should probably at least give it a try before shelving Redemption for something else. Ironically, I find Undead more engaging than the campaign proper.

I've heard a few people have some confusion about it, so here's the deal: Undead Nightmareit's a complete story-based campaign set in the Redemption world, but with a "what if?" twist of the dead rising from their graves. There are tons of cutscenes, all of the main characters (so far, anyway) make return appearances, and there's plenty of things to do. In fact, this is certainly one of the largest and most sizable pieces of DLC that I've personally played through, and I'm quite impressed with how much is here. I sort of expected to blow through it in an hour or two, but it's much, much larger than that. isn't just a multiplayer add-on pack,

Ironically, I think Undead Nightmare gets off to a much better start than the main game does. The scene is properly set, the player has a clear idea of what's required, and the game flows along a very logical path. There are certainly detours that can be taken, but pushing forward through the story feels believable and natural. An added bonus: it's pretty damn cool to ride across the prairie on a flame-haired, mythological steed.

I don't know if or when I'll ever complete Redemption's campaign, but Undead Nightmare has certainly been worth the price of admission so far. 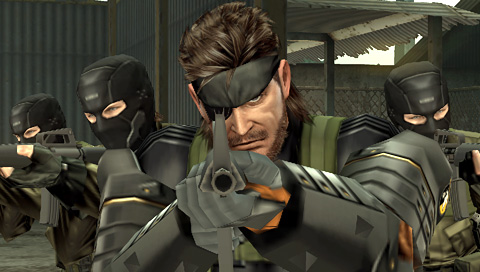 Aside from Undead Nightmare, I've also been putting some time into Metal Gear Solid: Peace Walker on PSP. It was a bit of a slow start and I can't really say that I'm very involved in the story, but after beating the first two bosses the gameplay is starting to click with me. Coping with full 3D play is a bit of an adjustment without having a second analog stick and things still get a little unmanageable when I get spotted and enemies go on full alert, but it's not too bad.

(While I'm on the subject: I've said it before and I've said it again—Sony's decision to ship the PSP with only one analog nub has got to be one of the stupidest, most shortsighted and inexplicable hardware design errors in the history of videogames.)

ANYWAY… big Monster Hunter fan that I am, I'm very much looking forward to getting into the hidden missions in Peace Walker. Evidently, two large beasties from Monster Hunter Freedom Unite are hidden away somewhere, and tackling those with Big Boss and his arsenal can't be anything but awesome.

The guest apperarances will apparently be reciprocated in the next Monster Hunter title hitting the PSP. Click here to see some pictures of the "Boss" and "Big Boss" armor players can collect and equip while taking down big game. My inner crossover geek is shrieking with joy.

While I don't usually make a habit of linking to 1UP, I found the list of Amazon Japan's Top Ten Games posted there to be quite interesting. I will refrain from making any comments, except that I can only imagine these best-sellers to be wildly different than what's hot in the US or EU.

@Crofto The River scene, yeah. The Barn scene is actually quite powerful and well done, and had it ended there I’d have had a much more sympathetic take on the game. I have an alternate take in my head wherein Marston simply walks up to the guy, and genuinely gives him a letter. He expresses his anger at what this man has done, declares that he’ll never forgive the other guy, but then walks away. Because raising his gun there would be dooming his own life as well. That’s the whole theme of the game. Raising your gun dooms you,… Read more »

Are you sure you saw the actual last scene? There’s a bit of confusion with many – at least when I was playing – about when the game actually ends.

I could not agree with you more, Brad. Seriously, it’s not doing it for me either.

Also, my brother finished it, and I got to see most of the story. The final scene is balls and betrays much of the point of the game.

Hey Crofto! >>I really don’t understand how Red Dead Redemption isn’t working for you on a story level, since I also find that aspect in games massively important, and yet the game almost instantly grabbed me. Tastes may differ, but I find the start of the game to be *incredibly* poorly-told. Marston’s motivation isn’t well-established, the player is almost immediately shunted into what feel like sidequests, and it’s not clear why Marston isn’t taking more action. Narratively and dramatically, it makes no sense and takes far too long to really start up. it’s their typical GTA boilerplate for a different… Read more »

I just started through Red Dead Redemption myself and can’t say I’ve even noticed parts of the story you have pointed out. I’m not that far in, but in all honesty, I didn’t realize there was that much of a story in the game! Go figure! From a history teacher standpoint, I love the time period, setting, theme, et cetera of Red Dead, so I was really looking forward to playing this game. It’s been alright so far, but not nearly as engaging as I was expecting based on other reviews. I’m sticking with it, not so much for the… Read more »

I really don’t understand how Red Dead Redemption isn’t working for you on a story level, since I also find that aspect in games massively important, and yet the game almost instantly grabbed me. In regards to Marston’s family – Again, it’s something that becomes more prominent the more you play. I can’t say more than that due to spoilers. However, although you may feel the game is drip-feeding story aspects, you gotta remember that the developers are also trying to create a fun game. Rockstar could probably condense the content of RDR to make the story go at a… Read more »