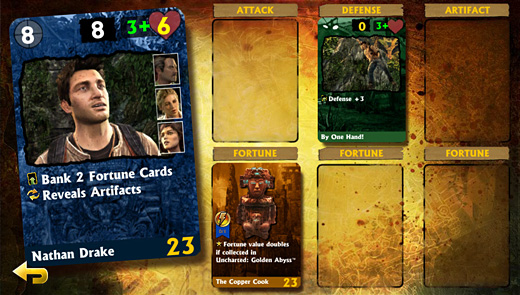 HIGH Finally figuring out all the rules after a few hours of play.

LOW Overlooking a combo bonus and going from a win to a loss in one turn.

WTF The final boss in the Golden Abyss campaign.

Although I can't say that I'm a big fan of Naughty Dog's Uncharted series, I have to admit that I'm attracted to the idea of it. Looking for lost treasures in dark jungles and abandoned ruins is always good in my book, and the Indiana Jones-ish vibes the games have never failed to appeal. It really seems that I should like them a lot more than I do, but they just leave me cold.

Interestingly, I'm quite agreeable to seeing the property used in different ways. For example, Nathan Drake is an enjoyable character to use removed from his normal context in Playstation All-Star Battle Royale, and now comes Fight for Fortune—a collectible card game (CCG) of all things. What could be stranger than placing this rugged relic hunter in this totally unexpected genre? The fact that it turned out pretty good.

Fight for Fortune takes what must be every character that's ever been in an Uncharted title (no matter how minor) and turns them into cards. Along with the familiar faces are cards based on guns, artifacts, and certain scenes or situations. Anyone who's played at least one of these titles will be sure to recognize a fair amount of the cards in the collection.

While it would be normal to expect a project like this to be a bit of a cash-in, I was surprised to find that the fundamentals of its gameplay are actually quite solid. I've played a number of CCGs in real life and electronically, and no matter what they're based on or how lush the artwork is, if the gameplay isn't dialed-in, then the whole thing ends up a wash. In Fight for Fortune's case, all the parts are where they need to be and they fit together just fine. 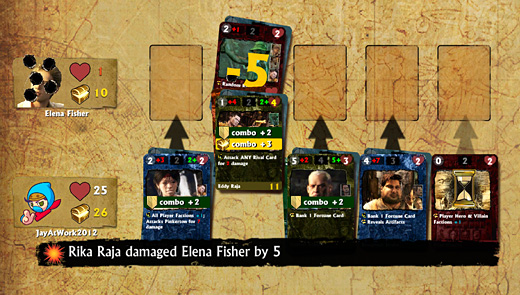 Without getting into too much detail, Fight for Fortune takes place on a "board" where two rows of five cards face each other. Players will place characters into one of these slots, and once placed, that character will "attack" the card directly opposite them.

This system is straightforward enough, but a satisfying level of complexity is added by support cards which can increase the attack and defense of character cards, in addition to adding a variety of other effects. There's also a "money" system that controls which supports the player can use and when, and it's cleverly done up as a series of valuable artifacts that fit with the overall treasure hunting theme.

In an ingenious twist, the effectiveness of these artifact cards will actually be increased during play if gamers have found or collected their counterparts in Uncharted: Golden Abyss. It's a fantastic synergy to take advantage of for players who've spent time with both titles. However, as someone who didn't spend much time with Golden Abyss, I can say that the title is still quite playable without the crossover bonuses.

The basic game comes with quite a bit of content—there are a large number of cards to collect, the campaign takes a respectable amount of time to get through, and there are online multiplayer, pass-and-play, and quick-match modes. However, there are two separate DLC add-ons available, and each offers a new campaign and even more cards to collect. I want to commend the developers for delivering a great title at a great price, and for creating cheaply affordable DLC packages which are difficult to say no to. The entire experience can be had for $11 in total, and that's a superb value.

Although the core Uncharted titles might not do much for me, Fight for Fortune is a respectably entertaining title for players who enjoy the CCG genre. It might not have the same run-and-gun Nathan Drake is usually known for, but I'll take card combos and strategy over killing a thousand generic thugs and auto-climbing ledges any day. Rating: 8.0 out of 10.

Parents: According to the ESRB, this game contains suggestive themes, violence, blood, language. Although there's no actual violence happening since everything happens by placing cards on a playing field, I suppose some of the images on the cards themselves may not be suitable for every child—guns, a few semi-violent scenes, and so on. I haven't come across anything that would warrant the "suggestive themes" warning, though. In any event, this type of game is aimed at older players in general, so my feeling is that most teens would be fine with it.

Deaf & Hard of Hearing: Since this is a turn-based card game, there is no real-time action and there are no audio cues necessary to fully engage with the action. It's totally accessible.