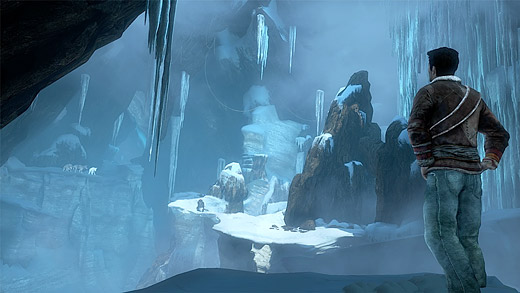 Still on my quest to play all the "big" games of 2009, I've almost got Uncharted 2 wrapped up… only two or three more sections to go. Having already put together a rough list of the year's top ten, I was wondering which title I might have to bump to make room for it. That concern is now moot, since it's not going to make the list.

If nothing else, the production values put pretty much everything else on the market to shame. The graphics are stunning in nearly every scene, and the voice work is excellent. I certainly can't fault it there—it's the other aspects that fail to impress.

Despite the impressive number of showy setpieces that kick the energy level into high gear, there are just as many things that drag it back down. For example, with all the time and energy put into designing the levels, I'm actually surprised that there are as many "where do I go now?" moments as there are. Naughty Dog gets around this by often having an AI partner lead the way, but that's a bit like cheating, if you ask me. They get caught out in areas when main character Drake is alone, and the way to progress is not obvious.

At the opposite end of the spectrum, despite the desire to incorporate a bit of tomb raiding, the devs sacrifice complexity (and hence, satisfaction of completion) of jumping/climbing puzzles for the sake of making them pass by quickly. Ostensibly, they don't want players to become bored by being unable to find their way (which didn't seem to bother them in the land-based areas), but the result was that there was no pleasure in climbing ledges and jumping gaps when there's precious little fear of falling, and the only correct path is usually quite obvious.

The gunfights, by far the worst aspect of the first game, are certainly improved but are still a sore spot. They just drag on for far too long, often throwing wave upon wave of enemy at the player. While something like that might work in a game akin to Gears of War or somesuch, it just feels like filler to me here, and rarely do the fights excite. Nearly every combat situation felt like it lasted about twice as long as it should. Conversely, the stealth aspect of the combat is much improved, and when granted the opportunity, taking enemies out quietly is a much more enjoyable experience than the "stop and pop" that chokes everything up.

Uncharted 2 certainly isn't a terrible game, but I think most of the 9's and 10's tossed its way are result of reviewers experiencing premature ejaculation due to the graphics and presentation. Although I haven't seen the end quite yet, I can't see much replay value here, and when the shine and polish are stripped away, the core gameplay mechanics aren't strong enough to keep you coming back for more.

From what I understand, multiplayer is a very worthwhile experience, but generally preferring the single-player as I do, I'll leave that for others to decide.

I agree 100% with this review. Game is overrated for all the issues you mentioned.

I did not enjoy the first Uncharted and tbh i went into the sequel wanting to dislike it. It turned things aroung after the first mission (Museum-Turkey). I found the gunplay much improved over the first one but i completely agree. The gunfights can go for way too long without really exciting you. I did not have a problem with understanding where to go next but you are again spot on the platforming aspect of the game. It’s just there for pacing. Provides no challenge, with you just pushing the thumbstick and occasionally pressing a button. It breaks the immersion.… Read more »