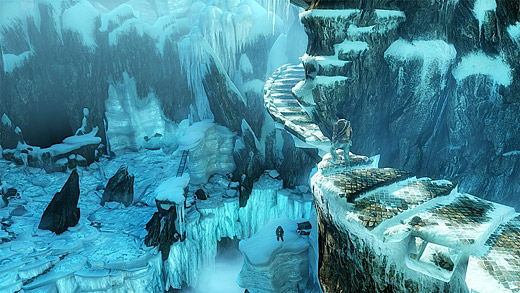 High The train section in the middle of the game is exhilarating.

Low The firefights drag on, never as exciting as they should be.

WTF The weird "warp" animation when the devs force Drake to make an extra-long jump.

Although I can appreciate Alex's enthusiasm for Uncharted 2, I can't say that I share it to the same degree. Naughty Dog's latest entry is certainly a showstopper when it comes to spectacle and flamboyant cinematic style, but when you peel away the graphical richness and high-tech polish, the gameplay underneath isn't as thrilling as the exterior.

First things first, I definitely want to give credit where it's due. Arguably the best-looking game on consoles today, the developers have spared no expense on the ridiculously lush visuals. Colors pop, minute details can be found in nearly every corner, and the artistic design is tops. In general, character animations are varied and lifelike, and there were a number of times when the developers added a touch or two that served no purpose other than to enhance the marriage between the characters and environments they populate. This kind of advanced, considerate work is certainly appreciated.

Going further, the performances given by the voice actors are as good as any that have ever been recorded. The writing is generally sharp, and an appropriate amount of inflection and emotion is injected everywhere it's called for. These voiceovers definitely do a great job of fleshing out the characters and selling their roles. Although I didn't find the plot about the chase for a magical stone to be particularly compelling, there were a few scenes that felt quite astute—specifically when characters Chloe and Elena come into conflict. I certainly agree with Alex when she states that lesser writers would have turned this arc into something more akin to a catfight, and I was glad to see that Naughty Dog took a higher road.

While Uncharted 2 certainly can't be faulted in terms of production or presentation, it becomes clear early on that everything in the game takes a backseat to the fast-paced, don't-stop-to-think-too-much movie-like quality that the developers are so obviously driving towards. They've certainly succeeded; if tickets and popcorn were to be sold, I imagine a good number of people would gladly line up. (Hold the butter on mine, please.) However, the play doesn't quite meet the same lofty standard. Grafting several styles together, Uncharted 2 ends up being a jack-of-all-trades and master of none. 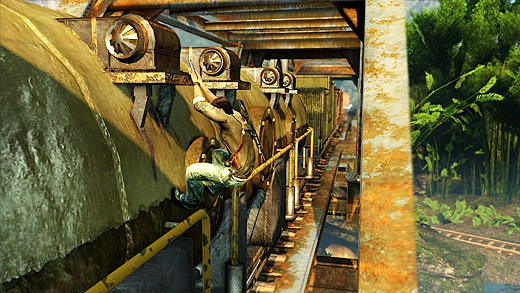 Despite the impressive number of showy setpieces that are intended to kick the energy level into high gear, there are just as many things that drag it back down. For example, with all the time and energy put into designing the levels, I was surprised that there are as many "where do I go now?" moments during shootouts as there are. Naughty Dog gets around this by often having an AI partner lead the way, but that's a bit like cheating, if you ask me. Their muddled path planning gets caught out in areas when main character Drake is alone and the way ahead isn't obvious.

Bizarrely, the game also suffers from the exact opposite issue—despite the desire to incorporate a bit of tomb raiding, the complexity of puzzles and environmental navigation are sacrificed for the sake of making them easily digestible. Ostensibly, Naughty Dog didn't want players to become bored by being stuck or confused (which didn't seem to bother them in the land-based, shootout areas), but the result is that there's little pleasure going through the press-select-for-the-answer puzzles or climbing and jumping when the only possible path is obvious and linear.

The gunfights, the most plentiful (and least enjoyable) aspect of the first game are certainly improved in this iteration, but remain a sore spot. Consistently dragging on for far too long, Naughty Dog throws wave upon wave of enemy at the player. Then, when it seems like all's clear, they throw in a couple more. Tedious rather than exciting, they felt like filler to me, and each new encounter was usually accompanied by an audible sigh. Conversely, the stealth aspect of combat is much improved, and when granted the opportunity, taking enemies out quietly is a vastly more engaging experience than the "stop and pop" that chokes everything up. Sneaky Drake is quite welcome. Shooty Drake, less so.

Uncharted 2 is a high-water mark in some ways and it certainly succeeds at what it aims to, but it must be kept in mind that the experience is more about providing a low-impact thrill-ride rather than something that players can really sink their teeth (and brain) into. Time spent with the game passes in largely painless fashion as eye-popping scene after eye-popping scene crops up, but in the end, the game as a whole was little more than an empty-calorie confection. It might hit the spot if a player's in the mood for exactly such a thing, but with every element except presentation done better by other titles, the middling quality of the gameplay didn't leave me feeling satisfied at all. Rating: 6.5 out of 10.

Disclosures: This game was obtained via rental and reviewed on the PS3. Approximately 10 hours of play were devoted to the single-player mode, and the game was completed. No time was spent in multiplayer modes.

Agree with your points, but cant even forgive on looks. A fairly sour experience. Combat, navigation, and writing are all so lightweight. This was really a game of the year? What annoys me primarily is the hand holding gameplay- until a staged mid boss fight where you suddenly have no context for how to defeat the enemy or where to go. Trial and error deaths until you figure out which thing to jump on or block and punch the same guy until the “cinematic window of opportunity” opens to advance the game. Y’know? Be a cinematic game, or don’t. But… Read more »

Hey Matthew, Thanks for your considered response. Much appreciated! I certainly think you raise some interesting points, but you have correctly intuited my response already… I didn’t enjoy my time with the first game enough to consider giving it multiple playthroughs. I’m definitely not saying that the nuances you suggested aren’t there, but the game was so tedious and trying at times that I couldn’t imagine giving it even five more minutes now that I’m done with it. One time through was more than enough, and you are right in thinking that collecting treasures holds little appeal. I’m calling it… Read more »

First of all, I absolutely loved this game. The visuals, some high-paced action, puzzle-solving, voice-acting, and character development were pretty strong, in my opinion. Well, okay, so this game doesn’t succeed as a puzzle game of its own, at least not in the way Machinarium and Myst do (I swear, I reference them in every post, but they were just so damn good!). Even so, it is, like you said, more of a “jack of all trades” type game. Was it meant to be solely successful as a puzzle? Probably not. As a mixture of many great elements of an… Read more »

I’m so glad you are around to make sense of all this. And I find that I almost always have the same feelings as you except for Mass Effect. I really despised that game but am thinking maybe I should’ve given it more of a chance. I think its was just a matter of type of game that I can’t seem to get into. You are one of the very best reviewers IMO and I always look first to your reviews before I decide to buy. Haven’t played Uncharted 2 but the hype is so thick I suspected it might… Read more »