The Hits Just Keep On coming! 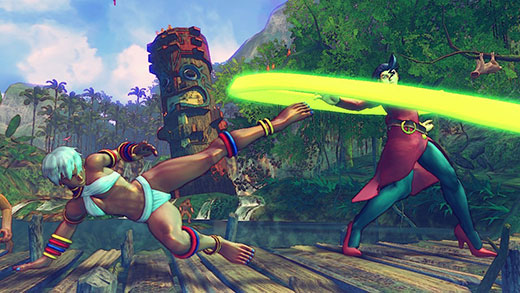 HIGH Trading the controller back and forth with my son, teaching him the basics.

LOW Realizing how far apart the series and I have drifted.

WTF Most of these voice actors are absolutely horrible. Are the devs deaf?

It's been a long time since I played a Street Fighter with any real level of skill. I used to be a fair hand when the original SFII came out and I stuck with it until about Alpha, but staying genuinely good at fighting games takes a lot of time and effort, and I just couldn't keep up.

Although I stopped playing on anything other than a casual basis, I've always had an affection for the series and its various incarnations—I spent my high school years at the local arcade with a pocket full of quarters and a crowd of others skipping school, so when I got the offer to review Ultra Street Fighter IV

, I figured it was the perfect opportunity to get reacquainted with an old friend. I didn't realize how much had changed, though.

Getting the facts out of the way, Ultra Street fighter IV is technically an upgrade to Super SF IV or its Arcade Edition, so either of those games are required to play Ultra.  It adds new environments, new modes, and five characters: Poison, Hugo, Elena, Rolento and Decapre.  There have also been some balance tweaks and such, but I'll leave commentary on the micro-fine points to someone more versed in the minutiae than I am.

After downloading and booting it up, my first thought was that the roster is huge. With a grand total of 44 characters, there's no shortage of fighters to choose from. That said, the cast does seem to be filled with quite a few bland and unmemorable faces. Of course the iconic classic cast is here and I did enjoy some of the later additions like Makoto and Elena, but there are also some incredibly goofy-looking ones like Hakan, Rufus, and Seth—Maybe it's just me, but designs like these don't feel like they fit the series at all. However, I can forgive those inclusions since Poison has joined the roster, and she's always been a favorite.

Once past the character select, I have to admit that I felt a little… lost. It's been said for years that the fighting genre is becoming more and more exclusive, aiming itself mostly towards the people who are already fans, while failing to welcome newcomers who haven't cut their teeth. If USF IV is any indication, I'd say that line of thinking is generally correct. Of course, it's not fair to suggest that this DLC should be the best place for a non-hardcore player to jump in, but the lack of immediate accessibility in general was something that was on my mind.

What's a personal action? How am I supposed to know which one of these Ultra Super Combos to pick? What are all these extra bars and meters? Why isn't it less of a hassle to pull up a moves list? I had no idea, and the game made no effort to explain anything. There's got to be a better way of presenting these elements without asking me to back out of play and dig around in the menus (or a wiki!) for more information.

Fortunately, it's pretty easy to ignore most of the front-end mysteries and get right to the meat of things, and when the fists are flying, Ultra doesn't disappoint. The action is fast and flashy, and it's still great to pull off combos and dish out the damage. The characters all have bizarrely huge feet which I found quite distracting, but otherwise, things feels pretty nice once it starts to pop.

However, there's a vast gulf between where I was with the fighting genre, and where I am now. Although I was able to plow my way through it several times, I didn't begin to approach anything feeling like mastery, and the hill that I'd have to climb to get there seems immense. I'm not talking about practice here—it felt like I'd have to do research before having enough knowledge to move forward, and I wasn't ready to commit that much time and effort. Genres have to advance and innovations need to happen, but there's also something to be said for elegance.

was a great time over a weekend (especially trading off between rounds with my kids) and I'm sure that players who've stayed current with Street Fighter have already purchased it and sussed out the new tweaks and systems, but as someone who popped in to see how things are going, I quickly popped back out and wished the series well. Rating: 8 out of 10

Disclosures: This game was obtained via publisher and reviewed on the Xbox 360. Approximately 6 hours of play were devoted to the single-player mode, and the game was completed with several characters. No time was spent in multiplayer modes unless you count passing the controller back and forth between rounds. If you do, then all 6 hours was spent that way.

Parents: According to the ESRB, this game contains: alcohol reference, mild language, suggestive themes, and violence. Some of the female characters are a bit on the sexy side and this is a game where everybody punches everybody else, but otherwise I'd say it's pretty standard for the genre. No real concerns.

Deaf & Hard of Hearing: No problems here. All dialogue is subtitled, and no audio cues are necessary for gameplay. It's all onscreen! Totally accessible.