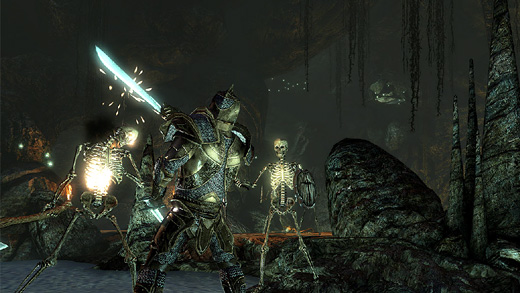 HIGH One of the most surprising and substantial improvements in quality, ever.

LOW The major boss battles can be a little sketchy.

WTF So why is it called "Two Worlds"? I only see one here…

Back in 2007, the first Two Worlds was released. It was a colossal failure, and the reviews were scathing. The title quickly became a running joke, gaining legendary status as one of the worst out there. Naturally, a sequel was never expected… but one has arrived. Even more surprising, Two Worlds II

is several orders of magnitude better than the first. No one could have guessed based on past history, but with work like this, developers Reality Pump should be holding their heads high.

A third-person open-world role-playing game (RPG) with real-time combat, Two Worlds II starts off in medias res with the main character and his sister under the control of an evil overlord. Since I could only stand fifteen minutes of the first Two Worlds, I had no idea what was happening or who these characters were. Luckily, although it is a sequel, there's nothing lost by starting fresh since the plot doesn't hinge on past events. Instead, Reality Pump starts right in on the action and brief tutorials of the game's many systems.

It's a smart move.

Once the adventure gets rolling, the thing that's most important to understand is that Two Worlds II puts a huge focus on action and fast-paced play. While it certainly doesn't skimp on a level of content that's comparable to something like a slightly smaller Oblivion, the two games display wildly different sensibilities in terms of how they approach the player.

For example, Two Worlds II's combat takes several cues from traditional third-person action games, and the pace is always high. Players can switch back and forth between three completely different equipment sets (melee/arrows/magic, for example) with just a push of the d-pad, and the ability to map several buttons on the controller means that players will have easy access to items and abilities in the heat of battle without diving into menus and choking off the flow of the action.

The quick pacing doesn't just apply to the combat. While the square footage available to explore is impressively huge, quests are laid out in an easy-to-read fashion, map markers point out nearly every goal, and plenty of teleports scattered throughout the kingdom make fast travel a snap. Hell, the main character even runs like the wind. While I enjoy digging into huge RPG adventures just as much as the next critic, it was a pleasant surprise to find one that wasn't afraid of letting the player forge ahead at their own pace. There's tons to see and do, but the critical path can be burned through if that's what's desired. It's a breath of fresh air, really.

Supporting the speed and ease of play are various player-friendly craft systems which allow modification and improvement of weapons, armor, potions, and magic spells. The options are surprisingly deep, with a huge number of things to tinker with and customize to a player's particular taste. 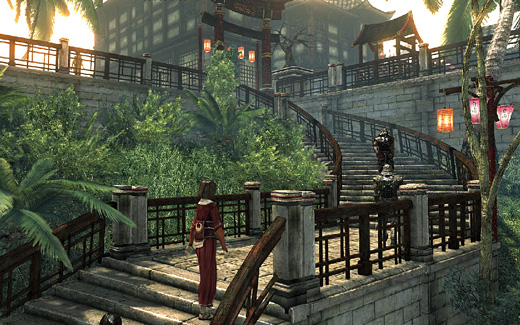 For example, gems can be attached to swords and shields, surplus equipment can be broken down into base materials and used to improve favorite items, and there's an absurd number of ingredients that can be cooked up into formulas of all kinds. Loot whores and mod fiends will find a new kind of addiction in Two Worlds II, and it's all very straightforward and easy to understand. A minimum of effort yields great results here.

On the other hand, the magic system is even more detailed than the equipment I just mentioned, yet has less payoff. The player must amass a number of enchanted cards, card-holders and magic staves in addition to devoting many skill points into various disciplines in order to take advantage of the spell-creation system. It ends up being a fair bit of work. Unfortunately, I never found results that even remotely approached the effectiveness of dual wielding twin maces or blasting a monster up close with a volley of multi-arrows. A little tweaking for efficacy felt like it was called for here.

My failed plans of being a world-conquering mage aside, a bigger hurdle to get over is the roughness of Two Worlds II's technical production. The developers show great talent and taste in their world design with strong concepts and unusual choices (African savannah, Middle-Eastern cities, Asian influences, and so on) but the framerate is a little low and screen tearing can be distracting.  Enemy AI is essentially nonexistent, and there are frequently times when the game is struggling to render the world and just can't keep up. There are a slew of other minor problems as well, like an inventory system where it's far too easy to accidentally destroy a crucial item, or the sketchy quality of collision during combat. It's not the roughest game I've seen, but with so many things to appreciate, it's a shame that it isn't a little slicker.

The story is another area where Two Worlds II could have used a boost. While most of the sidequests are generally interesting and frequently wink-nudge hilarious (whatever you do, don't skip the "Last Crusade" sidequest) the central plot is generic and unlikely to inspire. I also encountered several instances when the logical sequence of events during discussions didn't click in the proper order. For example, I would sometimes solve a quest before realizing there was something to be solved, or I would have a discussion with a person who was angry with me over something that hadn't happened yet. I get the sense that the developers were struggling mightily to achieve in this area, but I found the game best enjoyed while taking my time with the peripheral content and not paying too much attention to the plot.

People only be satisfied with "AAA" levels of production will likely gripe, but to be perfectly frank, none of the rough edges diminished my overall experience—the focus and design of Reality Pump's efforts just can't be denied. Large, expansive and colorful worlds combined with fast-paced action and enough gear-tinkering to satisfy even the most ravenous item fiends equals a title that has no problems engaging players who care more about the core experience than about small-time hiccups or a lack of eye-melting graphics. It may be a little on the rough side, but Two Worlds II


Disclosures: This game was obtained via publisher and reviewed on the Xbox 360. Approximately 18 hours of play were devoted to the single-player mode, and the game was completed. No time was spent in the game's substantial multiplayer modes.

Parents: According to the ESRB, this game contains blood, partial nudity, sexual themes, strong language, and violence. While it's safe to say that the content here is far from the most explicit I've ever seen, I would be uncomfortable with my children playing it. Though the sole scene of nudity I saw was quite brief and tame, there's plenty of salty language to go around. The types of tasks (killing, stealing, poisoning, etc.) and the general level of violence are also clearly aimed at an older audience, so my strong recommendation would be to keep little ones away from this title.

Deaf & Hard of Hearing: You won't have any problems. All spoken dialogue in the game is subtitled, and although the action is real-time, all enemies are clearly displayed via an on-screen map. There are no audio cues necessary for successful gameplay, so jump into the adventure with no fear.

Loved this game. (360) There are console commands for each platform to fix the graphics, turns them into amazing. There are other ones also for camera, taking away blur during dialog scenes, etc. Would have been easier if they put all those things in an option screen, but at least there is a long list of options to adjust via console commands. Exploring and quests are wonderful. Magic system is absolutely fantastic. Takes time to get cards and place enough points but eventually you become a powerhouse and it is so much fun making your own spells! I wish other… Read more »

brad, I followed the advice you gave me on may last post and bought TW2, and I have to say that I’m very pleased by that.
TW2 is a very good & adictive game.
at first i wasnt convinced but after i put in it 2 hrs or so I started having a great time.
i would suggest playing TW2 everytime.

“IGN gave a terribad review” If a game isn’t backed by hype, big publishers and fanboys then don’t expect IGN to review it properly. Sure, this game looks rough as an old boot, but the core game looks like it could be quite good. A solid RPG, if you will. I would be tempted to buy the game but got too much other stuff to play at the moment. Looks like it would be more of a 7/10 game for me – which I still consider good btw – but an 8 off Brad is very positive for the developers,… Read more »

Gonna go check this game out. IGN gave a terribad review, this guy gave a so-so review. I can deal with so-so. I care more about gameplay than flashy pretty tralala prancing pony what-notness. Anywho. Off to try it out, cheers.

Can’t remember much of the first one. Played the demo for about an hour or more, and remember only that the horse riding was a joke to watch, the main character looked or spoke like Arnold Schwarzenegger (which can be funny too) and the world was even less interesting than the one of Morrowind. I think it was sort of useless to me. The better Open World-RPG was TES, the better Act.-Adv.-RPG Gothic and Two Worlds brought nothing new to the table? Brad might “hate” it more because i assume he played the XBox-Version which might be significantly worse than… Read more »

Honestly, doesn’t this game sound exactly like Two Worlds I except with more favourable reviews? What gives? As someone who really enjoyed the first installment, I look forward to returning when I’m not completely drunk off my head and explaining why Two Worlds I was one of the best open world RPGs ever made!