Two Worlds II… and a Half! 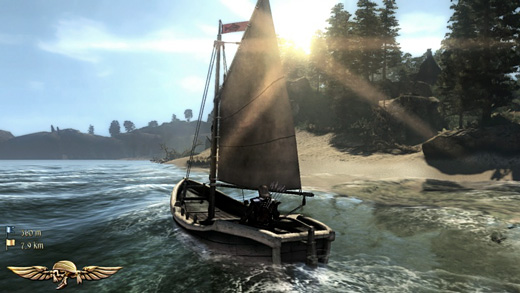 HIGH A huge amount of content for a game that deserved it.

LOW The chuggy combat and large number of fetchquests.

Although Two Worlds II's massive increase in quality over the first game caught me totally by surprise (and I enjoyed it quite a bit) I haven't thought about it for the past ten months. I imagine you haven't been thinking about it, either. There just hasn't been any reason to… until now. Although it's been a very long time coming, the Two Worlds II expansion titled Pirates of the Flying Fortress is now available both as a download, and will be included with the upcoming, revamped retail version of Two Worlds II.

Although most people might assume this was another quickie cash-in of the sort so common today, don't be fooled—Flying Fortress is a massive adventure that comes complete (and I do mean complete) with main quests, sidequests, brand-new areas to explore, numerous cut-scenes, full voice acting and enough weapons, equipment and spells to tweak for hours. The amount of content here is more than enough to satisfy even the most demanding DLC buyers.

Without getting too deep into spoiler territory, Flying Fortress starts off with a group of pirates approaching the hero of the main game and recruiting his help to find a treasure that grants the wishes of whoever finds it. It's a straightforward beginning, but things soon spiral off into different directions and the quest takes more than a few jags into totally unexpected territory. How unexpected? Three words: undead strip club.

It's all for the good, though. Flying Fortress offers an interesting, often quite humorous tale that does a good job of keeping the player interested while never taking itself too seriously. That's not to say it's pure comedy (because it's not) but the writers certainly aren't afraid of going for a few laughs.

In terms of technical production, Flying Fortress doesn't fare quite as well as the script. There plenty of rough edges and areas that need polish. Combat can often chug at times, the game often pauses as it's "thinking" about what to do next, voices during cut-scenes often drop to extremely soft levels, and it frequently feels as though it's struggling to run on 360 hardware. Much like the main game, Flying Fortress is one of those warts-and-all experiences that a player will have to either embrace, or just run the other way and not bother.

I would imagine that anyone who enjoyed the core adventure of Two Worlds II will find much to like in Flying Fortress, and although I wish that the level of polish was higher, I was able to get back into the zone even after all this time had passed. It wasn't difficult to remember why I liked the game so much the first time around, and since Flying Fortress is cut from the same cloth, a little more is certainly welcome. Rating: 7.5 out of 10.


Disclosures: This add-on content was obtained via publisher and reviewed on the Xbox 360. Approximately 10 hours of play were devoted to the single-player mode, and the content was not completed.

Parents: According to the ESRB, this game contains blood, partial nudity, sexual themes, strong language, and violence. While it's safe to say that the content here is far from the most explicit I've ever seen, I would be uncomfortable with my children playing it. There's plenty of salty language to go around. The types of tasks (killing, stealing, poisoning, etc.) and the general level of violence are also clearly aimed at an older audience, so my strong recommendation would be to keep little ones away from this title.

Deaf & Hard of Hearing: You won't have any problems. All spoken dialogue in the game is subtitled, and although the action is real-time, all enemies are clearly displayed via an on-screen map. There are no audio cues necessary for successful gameplay, so jump into the adventure with no fear.

Sounds very tempting. Unfortunately, after a quick browse online, I can’t find any retailer listing the bundled version you talked about (I’m playing on PS3).