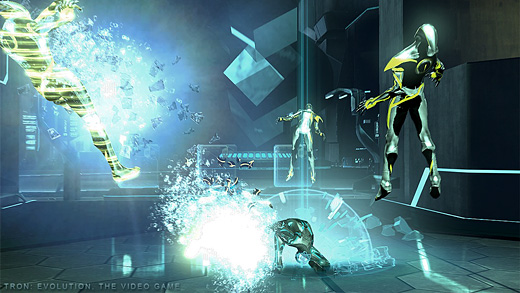 LOW Battles with too many enemies are a jittery, frustrating mess.

WTF was the story about?

I don't envy developers tasked with creating movie tie-in games. I would imagine implementing creative ideas and the desire to turn out the best work possible would be difficult to balance against hard launch dates and the limitations that come with staying canon to a specific IP. Given the limiting circumstances, it's no wonder that so many of these cash-in projects turn out to be instantly dismissible. However, every once in a while a studio manages to be a bit more successful at this difficult juggling act. Tron: Evolution

may not be a runaway success, but I think it turned out better than it had a right to.

Based on the just-released Tron: Legacy film, Evolution puts the player in the role of a nameless, faceless cipher character in an adventure meant to "explain" events which apparently take place after the original Tron, but prior to what audiences will see onscreen now.

(As a side note, Tron already had a "true" sequel in Monolith's superb Tron 2.0: Killer App, but apparently that work is no longer acknowledged.)

Considering that the original Tron made its debut in 1982, the idea of catching players up to speed on the story after all these years is a solid one. Unfortunately, the plot in Evolution is a complete mess and makes almost no sense. The game makes little effort to give enough information and context to figure out what's going on, and there's never any danger of becoming emotionally involved with the proceedings. After failing to make heads or tails of it, I gave up on the cut-scenes and focused solely on the gameplay.

Surprisingly, the bulk of it was fairly good.

In a somewhat unexpected move, Tron: Evolution features quite a bit of wall-running, gap-leaping, parkour-style action. It wouldn't have been my first guess as to where the game was going to go, but it works.

During each level, there are several sequences that ask the player to triangle jump up walls, vault over architecture, and string highly acrobatic moves together. The result is a fairly slick, streamlined vibe that flows by at breakneck speed, provided that the player can nail the maneuvers without falling to their death. Traversing an area flawlessly is thrilling, and vaguely reminiscent of other games that deliver a similar physical approach. Mirror's Edge or even the little-played Aeon Flux adaptation come to mind as comparables, and that's meant in an entirely positive way. 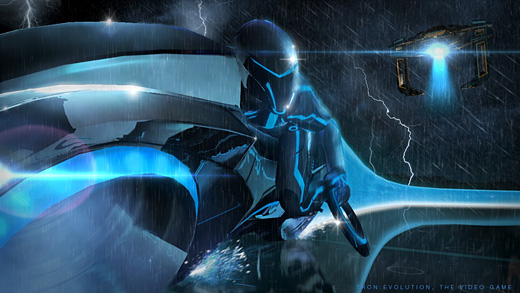 On the other hand, performing these bits without frequent deaths happens far less often than it should. It's not that these sections are particularly difficult; it's more that the controls are a little on the squirrely side, and inexplicably missing a jump or not leaping the way that was intended is a common occurrence. The developers must have been quite aware of this since checkpoints in each level are amazingly generous. It was a good move. Including these checkpoints definitely helps reduce potential frustration, but they don't mask the fact that a little more polish in these areas is called for.

I'm sad to say that this lack of polish is a common theme.

Evolution's combat is nicely elegant, and tossing a lethal disc around the environments provides a bit of depth without slowing down the same brisk pace that players experience while running and leaping through the environment. Switching between various enhancements for the disc such as bombs, slow time, and so on is effortless, and enemies are dispatched in quick succession. Unfortunately, the elegance breaks down when too many enemies appear and the deadly disc ballet devolves into struggling to target the right opponent and taking cheap hits while getting juggled. These encounters are another area where frequent checkpoints save the day, but with just a bit more tweaking, it'd be quite satisfying.

While both the parkour and the combat show frequent hints of greatness, that's not all the game has to offer—the rest of it just isn't nearly as good. Evolution's brief tank battles and lightcycle sequences are dull filler to be gotten through as quickly as possible, and the online multiplayer is questionable.

Taking part in the online "game grid," players can level up their characters off-line or on, and then compete with others in a small number of modes. This persistent leveling seems like it might be a good idea, but ends up being too unbalanced.

I didn't try playing with others until after I had completed the campaign, and my leveled-up avatar annihilated the lower-level competition with little effort. My reign continued until someone who was a higher level than me showed up, and this person put me in my place with no difficulty. The concept might have been to get players to invest in their characters, but if grinding is all that's needed to win, then I'll pass.

has too much going for it to write it off as another inspiration-free paycheck game, but I can't help but feel that if the developers had had another six months and perhaps a little more freedom to stray from the film's narrative, the end result would have been much better. When the game's character is vaulting over obstacles and bouncing from wall to wall in neon canyons while raining discs from above, it's hard not to smile—it's just a shame that a project with such promise has become a (partial) victim of the perils that befall most tie-ins. Rating: 4.5 out of 10.

Disclosures: This game was obtained via publisher and reviewed on the PS3. Approximately 6 hours of play were devoted to the single-player mode, and the game was completed. 1 hour of play was spent in multiplayer modes.

Parents: According to the ESRB, this game contains fantasy violence and mild suggestive themes. I'm not quite sure what "suggestive themes" are being referenced here, but the content of this game is harmless as long as parents don't have a problem with enemy humanoid figures getting "de-rezzed" by the equivalent of a glowing Frisbee.

Deaf & Hard of Hearing: I noticed that certain lines of dialogue in each level were lacking subtitles, but the vast majority of speech is accompanied by text on screen. I did not notice any significant auditory cues during gameplay. I would imagine simply playing through the game would not present any problems.