Three Heads are Better than Two 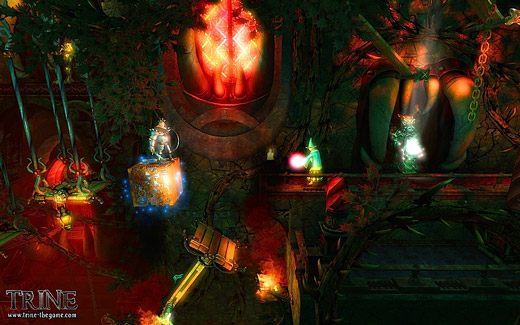 New to Sony's PSN online service is the much-anticipated Trine. Although only the third game from Finnish developer Frozenbyte, a clear sense of style and awareness of design are on display. Without a doubt, this Castlevania-flavored title is certainly a credit to Sony's camp.

Trine is a 2D, side-scrolling game sporting a cast of three heroes: a hardy knight equipped with shield and sword, a nimble thief with bow and grappling hook, and an insecure wizard who can manipulate objects from afar and create platforms out of thin air. Each serves their own function in specific situations, but the game's real hook is that the player must cycle through each of these characters—only one can be on-screen at a time. (Blame this body-sharing on a magical artifact… it's a long story.)

The triumvirate approach is a great idea that's gone unused in recent years, and one that translates into freshly engaging gameplay. Venturing through crumbling castles, dark forests and fiery forges, the order of the day is frenetically switching between the three of them every few seconds. For example, after creating a bridge-spanning plank with the wizard, the knight will be needed to fight off approaching enemies before the thief pops into action to grapple to a higher level. Although I personally felt as though the wizard didn't get as much use as the other two, I greatly enjoyed the balance between the characters and the way my brain was constantly scanning the environment, looking for opportunities to employ each of their talents.

An unexpected layer of complexity in the mix, the developers have implemented a physics system which governs the interactions of certain objects. Weight and inertia come into play, and things like boxes and platforms have their own centers of gravity. In order to advance past certain obstacles, it's often necessary to stack some of the wizard's magic boxes just so or to swing a pendulum at a certain speed in order to lift an attached crossbeam to a necessary height. I appreciated these behaviors for the most part, but there were times when I encountered some wonky interactions and unpredictable outcomes. It was mildly frustrating to not be able to get an object to fall a certain way, or to see something carefully orchestrated fall apart thanks to a reactional hiccup.

In terms of production, Trine is certainly no slouch. The graphics are warm and colorful with detail to spare, each area begging to be placed under close scrutiny. The controls are effortless and the short voiceover segments before and after each level are very well done. The developers also provide a fairly substantial amount of content for the money. Players can look forward to fifteen lengthy levels, each with hidden magical artifacts and other items to find. However, I do have to admit that the areas eventually start to take on a certain sameness which isn't helped by the very small number of enemy types (mostly skeletons and bats) and a lack of any real boss battles. It's unfortunate, since I felt as though a few flashy end-stage could really have pushed Trine into superstar status.

All told, Trine was a stylish, clever game that certainly manages to establish its own identity. There's nothing else quite like it at the moment, and there was never any question in my mind that the developers gave it a great deal of appreciable time and attention. Although the $20 price tag may seem a bit steep, players looking for worthwhile downloadable games will definitely want to give this one a close look. Rating: 8.0 out of 10.

Disclosures: This game was obtained via publisher and reviewed on the PS3. Approximately 7 hours of play were devoted to the single-player mode, and the game was completed. No time was spent in multiplayer mode.

Parents: According to the ESRB, this game contains mild fantasy violence. That said, all of the violence is enacted towards skeletons, spiders and bats. There is no gore or any sort of blood, no salty language nor any sexual situations. It may skew a little difficult for younger children (especially in the physics-heavy sections) but there's nothing to be afraid of here.

Deaf & Hard of Hearing: You won't have any problems. All of the voiceovers are accompanied by text, and sound is never a key factor during gameplay. Although some enemies are preceded by sound cues, sound does not have a significant impact on play.

Played the demo and liked it very much. But here in Europe it’s on steam for 20€ (about 30$ right now) and that’s a bit too high pricetag. Might get it when the price drops, ’till then I get torchlight.

[quote=Vince]I had a more enjoyable time with the title trying to manage the puzzles and platforming with two other people than switching between the 3 characters by myself. [/quote]

I downloaded the game but have not played it. I am trying to get a couple of friends to play this with as i heard it really does make a lot of difference.

I played the demo in both single player and multi-player. I had a more enjoyable time with the title trying to manage the puzzles and platforming with two other people than switching between the 3 characters by myself. Hope you get a chance to try it if you haven’t already.