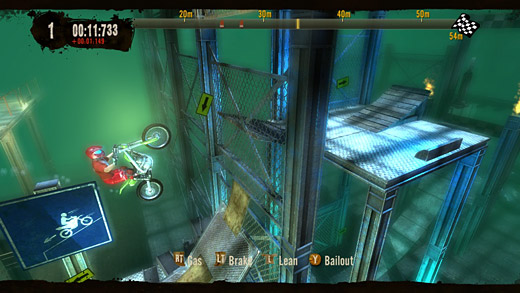 HIGH Nailing a tricky series of jumps after trying a few hundred times.

LOW The Extreme level of difficulty is heartlessly punishing.

WTF Why limit the number of attempts or length of play on the hardest levels?

When Microsoft announced their highly-publicized Summer of Arcade releases, Trials HD was probably the biggest surprise. Little was known about the game beforehand, and developer RedLynx is a fairly anonymous studio. If nothing else, it seemed like an unusual choice. After spending time with the game, it quickly became obvious how the effort was able to secure such a high-profile position in Live's warm-weather lineup—it's fantastic.

Most easily described as a conceptual spinoff of the venerable NES classic Excitebike, Trials HD's formula is a simple one: drive a dirtbike across tracks filled with insane obstacles and dizzying jumps to a finish line, and do it in a hurry. It seems strange that such a basic concept would be as unbelievably addictive as it is, but I've been in the grip of this game since day one and it hasn't let up.

Although I'm usually not a fan of timed runs as core gameplay or things emphasizing extremely high degrees of technical precision, Trials HD won me over in spite of featuring both. Really, a large part of the appeal is that the game throws down a gauntlet of challenge that's hard to resist.  There's a sort of sick compulsion in wanting to nail the landing off a hundred-foot ramp, or trying to climb near-vertical surfaces using rubber tires instead of pitons and carabiners. It may not always be enjoyable at times (the Extreme levels are absurdly hateful) but the usually-slumbering achiever in me couldn't quit it.

Quite honestly, the dips, dives and ledges the player is asked to navigate often border on the surreal, and it's certainly one of the more demanding efforts I've laid hands on in recent memory. If the developers hadn't absolutely nailed the physics and designed each track with such devious skill, the game would be a non-starter thanks to how slim the margin of error is between success and failure.

Thankfully, allowing players to restart instantaneously after a wreck is an absolute game-saver. If there was even a single second of pause, the frustration level would quickly spike to intolerable levels. However, since Trials HD obviously knows how steep its difficulty curve is, the game is all about letting players try again and again (and again and again) as painlessly as possible.

With a notable level of craftsmanship and clear focus on its subject material, Trials HD is going to be endlessly addictive to the right kind of player. I wouldn't have guessed that player was me, but no matter how many times my bike crashed, I kept thinking I could do it if I tried just one more time, and I was constantly hungry to get it right. Rating: 8.0 out of 10.

Disclosures: This game was obtained via paid download and reviewed on the Xbox 360. Approximately 6 hours of play were devoted to the single-player mode, and the game was completed. (Only two Extreme tracks left to go!) There are no multiplayer modes.

I had zero interest in this game until I read this review, then watched a video for it on YouTube, then tried the demo and immediately purchased. I can actually say that it’s the most fun I’ve had on an Xbox LIVE game since Geometry Wars first came out.

Heh, i know exactly what you mean. I wanted to quit many times, yet always came back for more. completing all tracks is definitely something i’m proud of. ^_^

This game rocks, and wow is it addictive. However, saying the game is absurdly hateful is a freaking understatement. This may be the hardest game I have ever played, yet I must, I must complete each race. WOW.