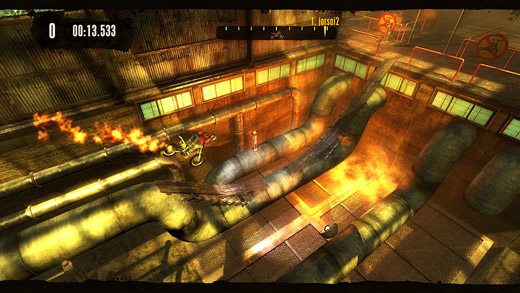 HIGH A ton of new tracks giving great value for the money.

LOW The second-to-last jump on the "Greatest Hits" track. Argh.

WTF I'm not sure if I want more DLC, or to never play the game again.

Best described as a conceptual spin-off of the venerable NES classic Excitebike taken to an extremely hardcore level, Trials HD is a simple game: drive a dirtbike across tracks filled with insane obstacles and dizzying jumps to a finish line, and do it in a hurry. However, doing so is much easier said than done.

Although the difficulty level is insanely brutal and requires an absurd degree of technical precision, Trials HD's  gauntlet of seemingly-impossible challenges are hard to resist.  There's a sick sort of compulsion in trying to nail the landing off a ludicrous ramp a hundred times, or trying to climb near-vertical surfaces using rubber tires instead of pitons and carabiners. The Big Pack delivers more of what addicts like me crave.

In addition to  never-before-seen tracks comparable to the original game's, several courses feature new additions such as fans that generate strong gusts of air or levels that have altered gravity. One course is also dedicated to the Donkey mini-bike (driving through ventilation ducts is tougher than you'd think) and the new Extremes are sure to test the patience of anyone taking on the challenge.

With a notable level of craftsmanship and clear focus on its subject material, Trials HD is as addictive as the nastiest narcotic to the right kind of player, and the Big Pack will not disappoint those who need another hit. Rating: 8.5 out of 10.

Disclosures: This game was obtained via paid download and reviewed on the Xbox 360. Approximately 4 hours of play were devoted to the single-player mode, and the new content was completed. There are no multiplayer modes.

Trials 2: Second Edition from Steam is imo a totally different game than Trials HD on XBL:
I played the demo and disliked it, i played some time afterwards Trials HD at a friend and had fun doing so, tried again Trials 2 and still could not get along with it.
Trials HD felt much more polished.

Spent hours with that. An old, but fantastic indie game, that did almost the same as Trials AND did work fine with keyboard.

Thank you so much for the quick response. It answered my question perfectly and I love the game 10x more now that I am playing it with my xbox controller. I liked it so much infact, I bought Trials HD and HD: Big Pack off XBL for $20.00 just now.

Can you say impulse or what!

I’ve only played it on 360, but I will say that I can’t even *imagine* playing it on a keyboard… it’s so dependent on small adjustments and finesse that i’d say a controller is an absolute MUST.

I mean, it’s difficult regardless, but don’t handicap yourself right off the bat, eh? ; )

Hey Brad, I just purchased this game on the Steam Holiday sale (for 2.49 I might add!) and I hate the keyboard controls.

Is the game any easier with a controller? I just can’t seem to nail down the keys fast enough to perform a spring jump or pass the tutorial levels