I would never have guessed it, but I've been completely addicted to Trials HD on the Xbox 360 this week. One of the spotlight Summer Arcade releases, it's basically an updated version of the venerable NES classic Excitebike hopped up on stupidiculous amounts of steroids. 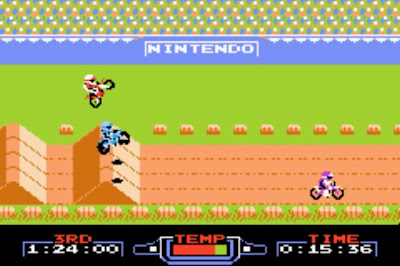 I'm not a fan of games that feature timed runs as a core part of gameplay, and I'm not usually a fan of games that emphasize an extremely high degree of technical precision, but in spite of those preferences, I got hooked immediately and I've been putting an unusual amount of time into it every night.

It's a little hard to describe why it's so compulsive, but I think a large part is that the game throws down the gauntlet quickly and it's hard to resist the challenge since the developers have absolutely nailed the physics and designed tracks with devious skill. Your brain thinks it can do it, and your hands feel like capable, so when the bike wrecks for the 147th time, you have no choice but to try again and get it right.

The peerlessly brilliant choice of allowing players to restart instantaneously after a crash (without any load time) is an absolute game-saver. If there was even one second of buzzkill loading, the frustration level would quickly spike and turn me off. However, since the game is totally calibrated to let you try again and again (and again and again) without keeping you waiting, it's hard to stop. 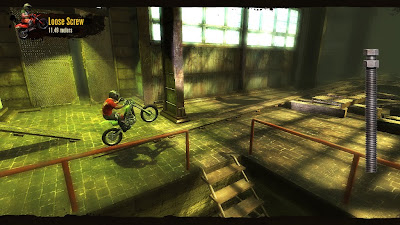 Trials HD is totally recommended, and FYI, you can only attempt a track for up to 30 minutes or a total of 500 crashes. I'm speaking from experience.

(I also downloaded NyxQuest: Kindred Spirits and Swords & Soldiers on WiiWare, but haven't had a chance to get to them yet. If anyone's got feedback or words of wisdom, send ‘em in.)

I've said this before and I'll say it again, any developer that puts out a demo that makes it multiplayer-only is immediately on my bad side. What do I mean? Well, in this particular case, it’s two different things.

The first thing that gets under my skin is when a demo requires a second player. So far, the only company guilty of this is Capcom. Last time I checked, their fighting games did include AI, so why is it impossible for a single player to try a demo before purchase?

I couldn't play the remake of Super Street Fighter, and now I can't give Marvel vs Capcom 2 a whirl either. Quite honestly, I very well may have picked up both of these titles if I had been able to try them, but it's insulting and stupid to me that Capcom won't allow it unless I have a second living, breathing person with me. No sale.

The second thing is when a developer releases a demo for a game that features a hefty singleplayer mode, yet only lets the multi out to be sampled. The recent revamp of Bionic Commando did this, and paid a serious price. Players were thrown into a deathmatch-type situation without any instruction on how the game was to be played, and it was an instant turnoff to most, myself included. (Ironically, the singleplayer mode was superb.) Initial backlash to the demo was so strong that it's commonly assumed that it played a large part in why so many people stayed away.

Now, Naughty Dog has announced that they will only be releasing a multiplayer-only demo for Uncharted 2: Among Thieves. 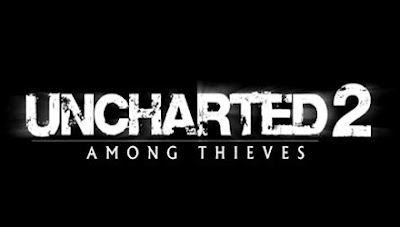 They stated that the logic behind such a decision was that it's difficult to get a player involved in the story and to place them in the action when the singleplayer mode is effectively an hours-long movie. Instead, they choose to show off the graphics and gunplay in a “shoot everybody” mode which likely won't contain any of the Indiana Jones-ish adventure or exploration elements that I'm guessing most people are coming to the game for.

I realize that creating good demos takes away development time from the game itself, but seriously people… it's not a difficult concept. Start a demo with a quick rundown of the controls, give players a very easy, illustrative section typical of the bulk of gameplay that they can breeze through a couple times, and end with COMING SOON. That's it. That's all we really want.

I realize that I'm not a developer (and I invite them to write in and educate me if I'm way off base) but I fail to see how demo after demo crashes and burns—hurting retail sales in the process—when the winning formula is so simple.