Man. Machine. The future… Of The Series? 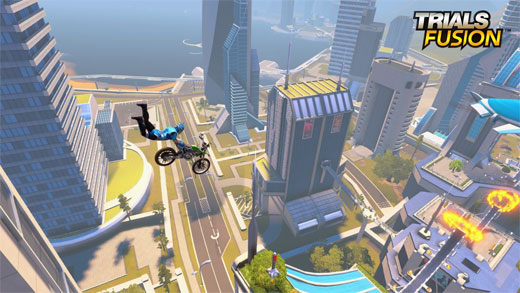 HIGH The Pit Viper is the best Trials bike ever.

, the latest installment of the hardcore motorbike-platforming-time-trial-scorechase game from RedLynx is now available, but after two years and much anticipation, it arrives with an uncharacteristic whimper rather than the triumphant engine roar one would expect.

Right from the start, something seems off about Fusion. Gone is the crazy, in-your-face aesthetic of the previous two, now replaced by a generic future theme filled with boring white surfaces and neon. Patches of nature that call back to the older titles pop up here and there, but it's a strange change of direction.

This slightly-off feeling continues in the gameplay. While high-flying jumps and agonizing climbs up vertical surfaces are still here, the first 75% of Fusion's tracks are utterly forgettable. I blazed through them all with gold medals in a single sitting, and could hardly remember a thing about the lot. The older games had bizarre, unpredictable courses full of distinct scenes and surprises. These pale in comparison.

A bit of its former glory returns when the Hard tracks unlock—they're a good mix of thrilling chasms and seemingly-impossible obstacles that require a grasp of the sometimes-insane physics to pass. For me, these few tracks were the best Fusion had to offer. Unfortunately, once completed, the game's balance spun off into loonyland with the Extreme tracks.

These extra-extra-punishing courses make for great viewing on YouTube, but I found it difficult to commit the free time and patience to best more than a few of these soul-killers. I was happy to complete them in HD and Evolution despite the difficulty, but the magic just isn't there in Fusion and I felt little drive to test myself again.

Sadly, Fusion misses beats in areas other than level design. The first thing players will notice is that the game actually tries to tell a story this time around. It's an interesting idea, but if there was ever a game which absolutely did not need a narrative, it's Trials. Even so, the voiceovers from a disembodied AI were mildly interesting until I started failing tracks and hearing the same voice samples over and over.

The other new addition is a trick mode. Tricks and dirtbikes seem like a natural fit on paper, but in Fusion, it's an absolute trainwreck.

When airborne, the player performs tricks by holding a direction with the right stick. Unfortunately, it's incredibly finicky and nearly impossible to do them with any specificity because the bike has to be positioned at a certain angle and the stick has to move in a certain way. Given all the motion that's happening with the physics, it felt like a total crapshoot as to which trick I would do at any given time. Even worse, there are delays between when the input is entered and when the trick is actually performed, causing loss of control in a game that's all about microsecond adjustments.

(Oh, there's also a new ATV, but it's so limited and boring I can't imagine why they thought it was worth inclusion.)

The rest of the game feels straight-up unfinished. For example, there are some surprisingly long load times when trying to view the bikes available for each track, or when going from the results screen back to a level. Trials was built on the concept of getting the player back into the action instantly, so these chunky pauses are surprising on such powerful hardware. Even worse, texture pop-in is a common sight, and there were a few times when the game failed to provide an optimal viewing angle for play. For such a technical, demanding title, rough edges like these are disappointing.

Exacerbating this not-fully-baked status is the disappointingly small number of customization options for bikes or riders, the fact that one of the game's modes isn't active, and that multiplayer is local offline only. I wasn't even able to log into Ubisoft's proprietary UPlay system despite numerous attempts! I'm sure all of these things will change at some point in the future, but Fusion is more like a framework upon which to hang patches and DLC rather than a polished product.

Although I have great affection for the Trials franchise, Fusion

doesn't feel ready for prime time. Add in the fact that it's got a higher asking price than the previous installments, and it's hard not to be disappointed. Hardcore Trials fans have probably already bought and completed this game, but for others who may be curious and haven't jumped in yet, I'd recommend either of the others before this one. Rating: 4.5 out of 10


Disclosures: This game was obtained via publisher and reviewed on the PS4. Approximately 4 hours of play were devoted to the single-player mode, and the game was completed. No time was spent in local multiplayer modes. Online multiplayer modes were not active at the time of review.

Parents: According to the ESRB, this game contains: mild language and mild violence. The violence is watching the bike's rider crash and ragdoll painfully in various situations. I honestly don't recall any salty language. There's little reason to be concerned here.

Deaf & Hard of Hearing: Dialogue is subtitled, but players who want to follow the story will have a tough time reading the subs since it's death to take your eyes off of the action for even a moment. Those who can't hear it being spoken might need to track down an FAQ to find out what's being said. Otherwise, it's totally accessible.