It's not MAX without more rainbows! 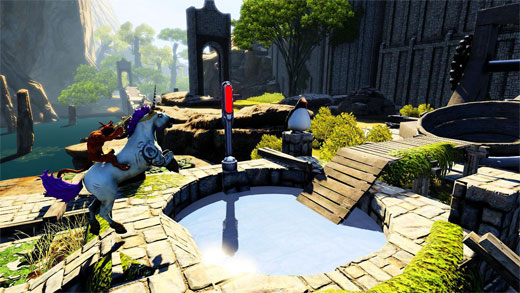 HIGH Super-surreal and trippy to the extreme.

LOW That unicorn really wants to do backflips.

WTF What's the deal with the penguins? Did they kill the squirrels?

If you were to ask someone what elements might make a game extreme, I'm not sure they'd say "a cat wearing a headband and holding a gun while riding a tattooed, firebreathing unicorn" but if they did, then the Awesome Level MAX DLC for Trials Fusion would absolutely have them covered.

In addition to the unicorn and its furry rider, this add-on includes 30 new tracks, 7 new items for the garage, more achievements, and more objects for the track editor. On the whole, it's a pretty substantial amount of newness.

Looking at the tracks, they're divided into two sections—The Awesome Adventure and RedLynx Vs. All-Stars.

The Adventure is incredibly bizarre, and probably the most abstract, out-there thing Trials has ever done. It starts off simply enough with a rider on a bike, but something soon happens (please don't ask me to explain, because I barely understand it) and the motorcycle transforms into a unicorn after the rider warps into another dimension.

The tracks here (eight of them) defy description, and certainly defy physics. At some points the unicorn is flying through space, and at other times the player is jumping back and forth between the "real" world and the fantasy world where the unicorn lives. I'm pretty sure part of it takes place on Mars. It's all incredibly trippy and quite entertaining because the player never knows what's coming next. I mean, I can't think of any other game that finishes with a penguin in a mech suit, so that tells players everything they need to know right there.

As a side note, the unicorn handles bizarrely—I found that it had a strong desire to do backflips when I didn't want it to, and it feels pretty hinky in comparison to the bikes. As a way of compensating, all of the tracks are quite easy, and no one should have any trouble stumbling their way through it.

For the purposes of comparison, I alternated between the two sets of tracks and finished all of them except for the Extremes. (Still working on those.) Although I'm sure that these tracks are the cream of the crop from all the entries that must have come in, they're certainly on-par with what the devs have put out, and in some places, dare I say… better? I guess it's the highest compliment to say that if I hadn't known where these fan tracks were from, I never would've guessed they weren't from RedLynx.

Although Trials Fusion is still my least favorite of the Trials games thanks to a lot of weirdness and off choices in the core design, the Awesome Level Max track pack is a great time, and I enjoyed the work on display here. While there are quite a few pieces of DLC currently available for Fusion, this one ranks near the top. Rating: 8 out of 10


Disclosures: This game was obtained via publisher and reviewed on the PS4. Approximately 4 hours of play were devoted to the single-player mode, and the content was completed except for the Extreme tracks. (Still working on those.) One hour was spent in local multiplayer modes.

Parents: According to the ESRB, this game contains: mild language and mild violence.The violence is watching the bike's rider crash and ragdoll painfully in various situations. I honestly don't recall any salty language. There's little reason to be concerned here.

Deaf & Hard of Hearing: Dialogue for the main story is subtitled, but players who want to follow the story will have a tough time reading the subs since it's death to take your eyes off of the action for even a moment. Those who can't hear it being spoken might need to track down an FAQ to find out what's being said. Otherwise, it's totally accessible. As far as this new content goes, there's no dialogue to worry about.