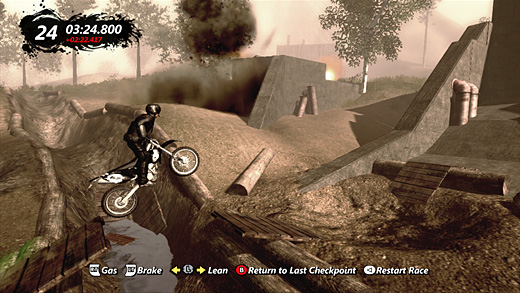 LOW Some of the Extreme tracks can induce ulcers.

WTF The mechanics of the wingman minigame don't make sense.

My wife knows when I'm playing games. I've got a comfortable little spot carved out for myself with a nice chair and headphones within reach. Glancing at me from across the room, she may not know exactly what I'm playing, but it's pretty obvious what I'm doing. However, there've been two specific times when my wife could take one look at me and know exactly what I was playing—2009's Trials HD, and now its sequel, Trials Evolution

I don't ride dirtbikes, I don't watch the sport on TV, and I'm not a fan of racing or timed games, but Trials… it reaches me. Something about these titles just connects on a deep, core level. I can play the most epic RPG and save the universe from evil or blast my way through an intense shooter, delivering headshot after headshot, but to my wife's eyes, I'm just sitting in my chair and quietly clicking buttons.

Not so with Trials.

When slamming a bike through tracks littered with tricky jumps, steep slopes and unreal obstacles, something happens. My legs tense, and my shoulders shift. Sometimes I lean forward. When I'm right on the cusp of a bone-shattering landing and I need a little more oomph, my whole body pushes as if that force will somehow be transferred into the console and give my virtual rider that nudge needed to clear it.

…Of course, moving around in my seat doesn't have any effect on what's happening onscreen, so when my rider wheels helplessly backwards and crashes upside down into a pit of flames, I've been known to spin around in my chair or stomp my feet. Sometimes I'll even jump up and down, and shake my fist a few times.

Have I mentioned the swearing? 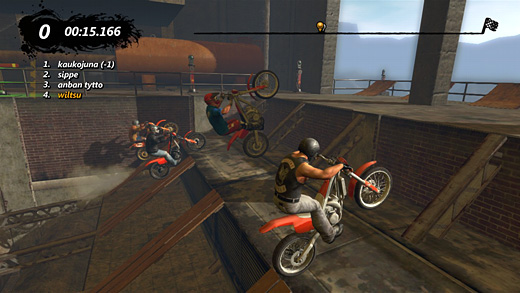 We're not averse to salty language in my household, but when I'm taking on the Extreme levels in Evolution, I have to make sure my kids are asleep or playing outside. When consecutive inclines are denying progress towards a stubbornly distant finish line, cascading rivers of profanity pour out of me and curse the developers who created something so incredibly vexing—yet so impossible to put down. (I also curse their mothers, but let's not go there.)

All talk of curses aside, the truth is that I love Trials. There are few games which are so incredibly rewarding to those who master the physics required to fly up, over and through the new courses that Evolution brings. It may be a harsh task that demands both blood and tears before mastery is achieved, but nothing tastes as sweet as when that perfect line is found and that final ramp is cleared.  It's Demon's Souls on wheels.

Fortunately, the developers are not heartless, although they may seem so after I've failed a nasty jump a hundred times or more. Usually more. Evolution's "license tests" and medals that must be earned mean that technical skills for success must be learned before being exposed to tougher stuff. Some tracks might be trickier than others, but the game never threw me into deep water before I could swim. It's a natural, effective way of providing a smoother difficulty curve than was found in Trials HD, and it's superb.

The aesthetics of Evolution are a step up from its predecessor, as well. Leaving behind the gritty, claustrophobic warehouses that made up the first game, It was a treat to see such a diverse array of imaginative environments. There's still plenty of fire and brimstone, but there are waterlogged sawmills, half-constructed towers, cross-country treks through idyllic countrysides—even a few homages to other notable titles like ICO and Limbo.

Although the visual twists and turns occasionally lead to optical illusions that tripped me up, these tracks feel wonderfully wide-open and expansive. This new spaciousness isn't to say that playing the game is ever anything less than white-knuckling, though.

truly is the next step in the outstanding core experience from HD, polishing every aspect of an already-fantastic game to a near-blinding sheen, and then delivering something peerless in terms of technical precision and visceral addiction.  They don't come better than this.

Now, step back and give me some room… These Extreme tracks are going to have me spinning around in my chair and spitting profanity for a while longer. Rating: 9.0 out of 10.


Disclosures: This game was obtained via publisher and reviewed on the Xbox 360. Approximately 12 hours of play were devoted to the single-player mode, and every track in the game was completed with at least Bronze. No time was spent in multiplayer modes.

Parents: According to the ESRB, this game contains mild violence. It may sound strange to have a violence warning on a motocross game, but there are plenty of pitfalls for players to fall victim to, and when a rider falls off of his bike, he often does all sorts of crazy gyrations and bone-breaking maneuvers. In all honesty, it's quite hilarious and I have no problem letting my children watch as I ragdoll down into a pit of spikes, but be aware that some of these wrecks are wince-inducing.

Deaf & Hard of Hearing: You shouldn't have any concerns. Everything needed to play the game skillfully is conveyed on-screen, and there are no audio cues necessary for success. It's totally accessible.