The other day, my fellow GameCritics staffer Trent Fingland reported that his apartment was robbed and tons of his game stuff was jacked by some decidedly unsavory individuals. (What kind of jerk takes everything in sight, but leaves behind a pink DS?)

A few years ago, the same thing happened to me. I had a large amount of my game collection and related items in a storage locker that was broken into and cleaned out. It was incredibly heartbreaking and depressing, and I would have been lost if not for the kindness that GameCritics readers and other people online had shown. A ton of people who I'd never met in real life sent items to me to replace the ones that were taken—believe it or not, someone was even nice enough to send me a copy of Panzer Dragoon Saga completely free of charge!

That kind of generosity really blew me away at the time, and I'm hoping that readers of this blog and GameCritics.com will show the same sort of love to Trent—He's been a longtime member of the site as a reader, and he's been a great asset as one of our newest writers. Man deserves it.

I asked him to send me a list of the stolen goods that were most valuable to him… this list is by no means complete, but he chose these as the things that he'd most like to have replaced. If anyone reading this can spare one of these titles and help Trent rebuild his stolen collection, you will earn my thanks and a huge amount of good karma points for use in the next life.

If you can spare one of these or would like to help Trent in some other way, drop me a line here or through Twitter and I'll share the pertinent info. 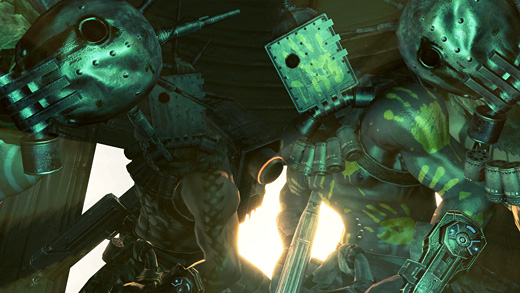 Earlier today I finished Lost Planet 2 on PlayStation 3. It was a really bizarre experience for a few reasons, but primarily because it started off lukewarm and sort of middling, but then actually managed to get better and more exciting with each successive level. I wasn't feeling too hot on it at first, but the game had completely won me over by the time credits rolled.

An interesting blend of solo and multiplayer styles, it's a fairly experimental title that tries some new things and mostly succeeds. The level design is great, and the graphics are very impressive, and there are a bunch of OMFG moments that will likely remain in many players' minds for some time to come.

On the downside, the story could have been ten times better than it is with just a little bit of tweaking. It was fairly painful to see some of the missed opportunities in terms of the plot, but I will admit that it did come together in its own slightly awkward way by the time credits rolled. However, one thing that has no redeeming qualities whatsoever is the way the game doles out customization items for player characters. For whatever bizarre reason, Capcom thought that including a random slot machine mechanic as a way of awarding extras was a good idea, and you know what? IT'S NOT.

When I play a game that features player customization, I don't mind having to earn or unlock certain things, but at least give me a few options from the start and for God's sake, don't make anything random about how a player gets more. Give me a store to shop in, or some objectives to shoot for… anything that has some clear focus and end goals. I can't think of anything more distasteful and painful than grinding for points to spend in a slot machine, and winning worthless crap over and over and over again when what I really want is a new gun or different head to use for my character.

The review will go live at GameCritics soon, but for right now but me just say that I enjoyed my time with Lost Planet 2 more than I had expected to, and the final review (and score) are definitely on the positive side.

In other games news, I've started Dementium II for the DS. A first-person Horror title, I've got to say that it's been creepier and more gruesome than I would have expected possible on Nintendo's handheld. I've only barely scratched the surface of it so far, but I'm liking what I'm seeing.

GF666>Thanks so much for your kind offer, but I’m pretty sure those would be PAL versions and not playable on US hardware. = (
Super-big thanks for the offer, tho!

Li-Ion> Sent you an email.

I don’t have any of the items on the list, I could spare some DS games however: Zelda Phantom Hourglass and GTA Chinatown Wars. Other than that I just have PC games but most without the box (I had to throw all the boxes out since they used up way too much space in my flat…), thus not good for a collection.

Truly sorry to hear about Trent’s misfortune. As a collector myself, I know how devastated I would be if it happened to me. As such I am willing to help if I can. Out of the games you have listed I only have FFX & FFXII (I plan to get 3D Dot Game Heroes very soon & Demon’s Souls when it finally gets released here). The problem being that I live in the UK and am unsure if there is a region lock on the PS2. If these are of use, let me know and I’ll get them shipped out… Read more »

Shame about the PS2 games being region locked, I wasn’t sure if they were or not because I know the PS3 is region free. I’ve had a look through my collection and the only NTSC game I have is Indiana Jones on the SNES (which was picked up at a car boot sale and didn’t realise it wasn’t the PAL release till I got home), but its probably not worth the price of the postage. But its there if wanted. Also, I can understand why Trent wants 3D Dot Game Heroes back. I got it at the weekend and have… Read more »