A Half-dozen Ways to Save Lives 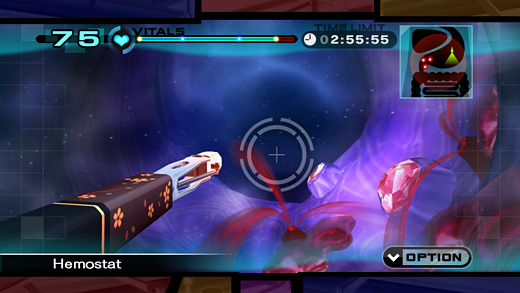 HIGH The Forensics mode is so great, it could be its own game.

WTF The phrase "think slowly" does NOT mean the same as "think hard."

Trauma Team, the fifth game in Atlus's semi-magical, mostly-medical operating room series is here. Unlike other franchises which spawn lesser iterations, the maestros in the house of Shin Megami Tensei have somehow managed to improve on their formula each time, against all odds. It may be debatable, but after my run with this latest entry, I'm fairly convinced that it's the best Trauma title so far.

While the core series concept of doing surgery hasn't changed, Trauma Team takes a radical shift in design by adding five new specialties in addition to the primary knife-and-stitch work. Players will now be able to step into the brand-new and never-before-seen shoes of a First Responder (EMT), an Orthopedist, an Endoscopist, a Diagnostician, and a Forensics expert, each with their own character and storyline.

Ironically, adding this diversity is probably the smartest thing Atlus could have possibly done. Although the series has always been strong (apart from occasionally absurd difficulty) people were starting to wonder how the developers could keep the momentum going. Rather than continuing down the sci-fi route with more bizarre alien-like microbes and viruses to "battle" inside some poor sap's chest cavity, the gameplay takes a more realistic approach by focusing on aspects of medicine that have gone untapped.

Far and away, my favorite new mode was Forensics. Detailed and totally different from the fast action of surgery, this deliberate, methodical system was all about asking questions, investigating crime scenes, and piecing together clues with logic and educated guesswork.  Quite similar to Capcom's Ace Attorney series in certain ways, following a trail from corpse to killer was quite meaty and satisfying. Diagnostics was very similar in approach, but instead features 1-on-1 interview style play with the doctor asking questions and hypothesizing various diagnoses with the help of X-rays, CT scans and so on. It wasn't quite as fleshed-out as Forensics, but was still intriguing. I never imagined that scrutinizing the results of bloodwork could be compelling, but it was.

Surgery is much the same as it's always been in previous Trauma titles, and that's a good thing. In my opinion, it's probably the best and most sensible use of the Wiimote/Nunchuk configuration that's ever been devised, and it's no different here. Interestingly, the First Responder track is quite similar to Surgery, with the difference being that the tools available are more limited and the number of patients is large. Rather than focusing in-depth on just one person, the EMT tasks will ask players to jump back and forth between five or more, trying to keep them all stable while treating immediate wounds at the same time. The rapid pace and multitasking keep the adrenaline factor fairly high, and the struggle to stay cool under pressure was a pleasant challenge. 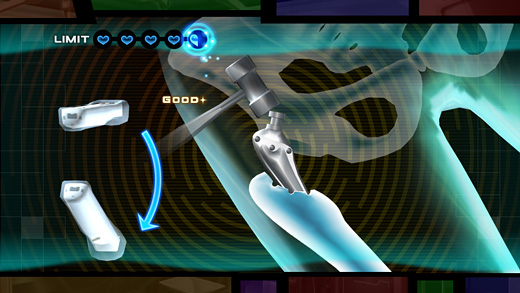 The final two specialties each brought interesting elements, but neither felt as polished or as entertaining as the other four. Playing as the Orthopedist felt fairly repetitive, much of the work consisting of drilling through bone and placing screws. I can appreciate that it's probably a fair approximation of what an Orthopedist does in real life, but it doesn't make for gripping levels. Endoscopy was even less enjoyable. Inserting the scope and moving it ahead required the player to actually thrust the Wiimote forward in a motion that's awkward, uncomfortable, and imprecise. Additionally, the Nunchuk control over tool selection in this mode didn't feel as effortless and logical as it did in the others. The procedures are even more repetitive than Orthopedics, to boot. If Endoscopy never came back, I'd be fine with that.

Although those two modes definitely felt weaker than the others, that's not to say that the game especially suffers for them. The levels are completed in fairly short order, and since they only account for a fraction of the overall whole, these segments are more than compensated for by the rest. The production values and time spent on the plot help ease the pain, as well since Trauma Team's peripheral elements display the same ridiculous amount of panache and flair that Atlus games are generally known for. Everything is top-notch here—the jazzy soundtrack, the flawless voice acting, and the arresting visual style blending aspects of Japanese anime and American comic books. It's not overstating the case to say that it's all fantastic.

Although the developers still stubbornly resist giving the player RPG-like choices or multiple endings based on performance, the story itself is more than capable of sustaining the game's 20-plus hour running time, easily matching the quality of the graphics and sound. The plot begins by being split into six distinct segments. After trying a few different tracks, the player will soon begin to see how each doctor interacts with the others. For example, one doc's potential love interest becomes another's patient, and so on. Once past the initial sets of levels, all of the specialties intertwine as a large-scale medical emergency builds to a head and the Trauma Team staff must pull together. The cast was memorable, the writing had just the right mix of silly and serious, and I was actively interested in seeing how each doctor's story would end. For a game that really isn't an RPG in any sense, it doesn't come much better.

Great presentation, (mostly) great gameplay, and an above-average set of characters combine to deliver what I see as the most diverse, entertaining Trauma game to date in a series that really doesn't have a weak link. Long-time Trauma fans have a superb title to look forward to, and Wii owners who've never tried the series before now have the perfect jumping-on point. For anyone who plans to take a Wiimote in hand at any point this year, Trauma Team is the textbook definition of a no-brainer purchase. Rating: 8.0 out of 10.

Disclosures: This game was obtained via publisher and reviewed on the Wii. Approximately 22 hours of play were devoted to the single-player mode, and the game was completed. No time was spent in multiplayer modes.

Parents: According to the ESRB, this game contains blood, language, suggestive themes, use of tobacco, and violence. Although there's nothing in this game that's especially objectionable, the fact remains that it's essentially geared towards older players. Kids in their teenage years should be fine since the content here is far less graphic or intense than most of what's shown on the average television medical drama, but parents still might want to steer young ones towards something a little friendlier. On the other hand, I think a case could be made that this title is actually somewhat educational, delivering a fair bit of accurate medical information in entertaining fashion.

Deaf & Hard of Hearing: You should be aware that there are a handful times when sound plays a fairly key role in the game. For example, I found it much easier to find differences in a patient's breathing through its sound instead of the visual representation on-screen. Additionally, it's much easier to locate small clues in the Forensics mode by the ringing sound they make than to see them. To be fair, there are visual cues for all of these things, but players who suffer hearing loss will have to work a little harder in order to get the same result. The game is still entirely playable and I would not say that these are barriers per se, just something to be aware of.