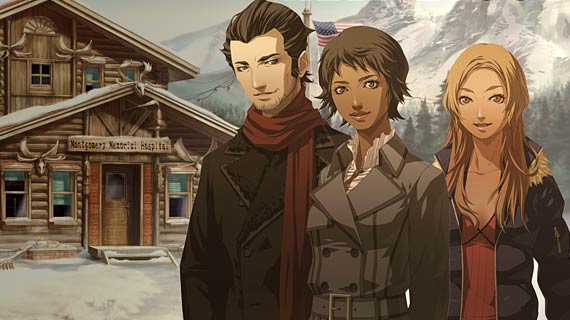 Volunteering for a third tour of duty with the unusual Trauma Center series, I found New Blood to be an extremely unbalanced experience. Though it's undoubtedly one of the most effective uses of the Wii's control system and presents content that virtually no other console developer has attempted, the designers have turned something that should have been a sure thing into a difficult recommend due to an unacceptable level of difficulty. The first Trauma Center on the DS was excruciatingly hard, but the Wii's remake (Second Opinion) hit it just right. I was hoping that New Blood would continue the trend, but faithful upholders of the Hippocratic oath will find it either slightly challenging when playing with a partner, or absolutely impossible when going it alone.

If you think that narrative progression sounds similar to the last two Trauma Center games, you're exactly right. In fact, much of New Blood is practically identical to its predecessors besides the storyline. (And disappointingly, there still aren't any story branches, player choices or RPG elements.) 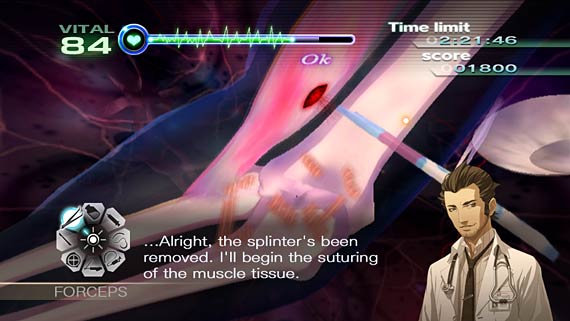 For example, the visuals and presentation are comprised of the same still-frame cut-scenes and mid-90's static backgrounds. Although upgrading to actual animation or higher-end effects would be appreciated, nothing here is ugly or unappealing… just incredibly outdated. The Wii is without question the weakest of the three current-gen consoles in terms of raw horsepower, but it's capable of much more than this.

The gameplay is also unchanged, though since it was so good to start with, this was a wise decision. The Wiimote functions as a substitute for a range of medical implements while the nunchuk attachment changes the selection depending on the situation. With a quick flick of the thumb, the on-screen cursor can become a scalpel, forceps, a syringe, needle and thread, a roll of gauze, and a few other things as well. It's a clever and elegant system, and probably the most satisfying implementation of Nintendo's technology including their own first-party efforts.

So if everything is essentially the same, what's different? Unlike the last two Trauma Center games, New Blood seems created from the ground up as a multiplayer experience. This is both its strength as well as its fatal flaw.

I count myself as one of the luckiest gamers alive since I'm married to a wife who is just as keen about playing as I am. With a second player always at hand, I was able to tackle the entire game cooperatively and enjoyed doing so. There were a few procedures which tested our teamwork and skills, but with one of us handling drainage and stabilizing procedures while the other took on excision and suturing, our patients were in good hands. 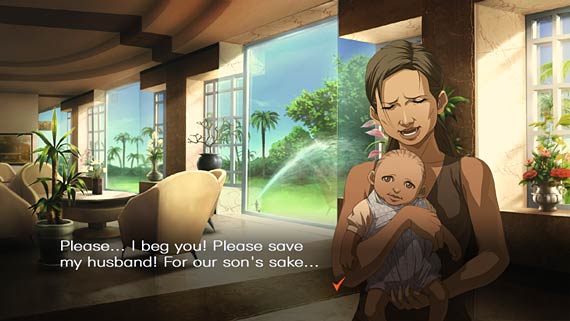 However, I went back on my own to see how different the experience would be without my co-surgeon and found that the game was nearly impossible, even on the easiest setting. There are simply too many things happening at the same time for one person to manage by themselves. Judicious use of the game's "Healing Touch" time-stopping maneuver amounted to little more than a temporary band-aid, and wasn't nearly enough to prevent most patients from dying on the table. If a real doctor lost as many patients as I did, he'd be banned from medicine and brought up on charges for wholesale slaughter. Although any quality co-op opportunities are always appreciated, New Blood commits the saddest form of suicide by being too difficult for anyone who won't be able to play with a real-time partner.

I was lucky that I enjoyed the game thanks to my own personal circumstances and tastes being a perfect match for what New Blood had to offer, but I imagine that I'm in the minority of the minority of gamers who will give New Blood the time of day when there are so many big-budget blockbusters on shelves competing for the same dollars. Going niche is a valid strategy for success in such an environment, but the insane difficulty will only serve to alienate the few people who would have been attracted to the game in the first place.