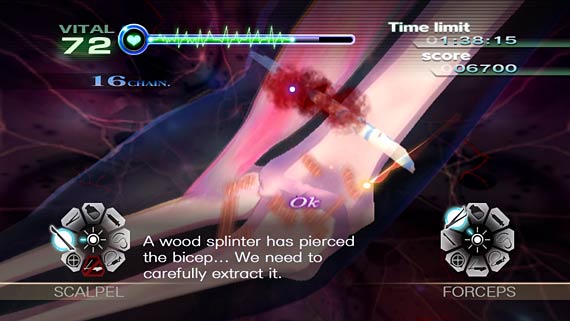 Parents shouldn't be too concerned. Naturally there's a bit of blood since this IS a surgery game, and you can't really operate without seeing some red stuff. The "violence" is exceptionally tame (mostly gunshot sounds and one wounded dog) and the language is negligible, and not even worth mentioning.

Wii gamers are advised to give it a try if they already know they're fans of the series AND if they have access to a living, breathing person to play with. Trying this one solo is suicide and if that's your only option, then pass.

Deaf and Hard of Hearing gamers get full text for all conversation in-game. However, during tense procedures it's sometimes easier to hear when something happens than to visually try and see it. For example, when a patient's life drops into the danger zone an audio cue is given, but without hearing a player would have to take their eyes off the action to look at a life bar at the top of the screen. A small effort, but sometimes a second can make all the difference. Still, I'd say that it's equally accessible in the vast majority of play.