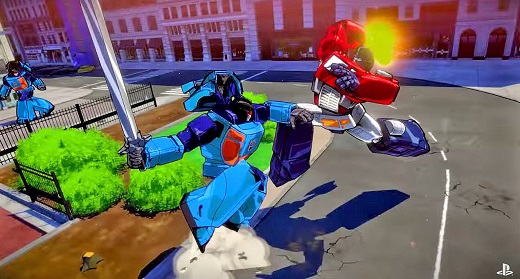 HIGH Realizing it really looks as good as it does in trailers.

LOW Escaping from the plasma core.

WTF The Decepticons aren't playable in any mode?!?

Look, let's not waste time here. I'm going to get right to the point and say that I love Transformers: Devastation. Absolutely love it. No bones about it, I think it's an awesome game.

Why am I so nuts about it? Well, let me set the stage.

I was a kid when Transformers first hit US toy shelves in 1984. It was a legitimate phenomenon, and it swept the country. I can remember going into toy stores and commonly seeing several aisles devoted to everyone's favorite robots in disguise. It was huge.

I was also a fan of the original cartoon, and I'm pretty sure I've seen every episode at least twice. Probably more. While I fully acknowledge the failings that show has (and there are many) there's no denying the influence it had at the time.

The Transformers have carried on since their debut thirty-one years ago, with some great iterations (shout-out to Beast Wars!) and some not-so-great, but sadly, video games have always been a problematic medium for the Autobots and Decepticons.

As a lifelong fan of the franchise, I've never been satisfied or even happy with any of the adaptations we've received. None of them have truly captured the look, the feel, or the energy of the material overall, and certainly none have even scratched the mojo of the original stuff—the Generation One stuff when Optimus Prime and Megatron were battling over the fate of Earth.

I give this preamble as a way of saying that this review of Transformers: Devastation is not written from the perspective of someone who's had a passing relationship with TFs, it certainly isn't written by someone who only knows the ‘bots from the execrable Michael Bay films, and it's absolutely not meant to be a neutral "objective" review—but that's just fine, because the game isn't a neutral, appeals-to-everybody project, either.

Devastation is obviously a labor of intense love crafted by developers who have a deep understanding and respect for the material. It's a niche game made for niche fans, and it just so happens that this review was penned by someone who's had a relationship with these shape-changing robots since they've been a thing. I am the personification of that niche.

Keeping this in mind, I'm thrilled to say that not only is Transformers: Devastation a fantastically potent and intensely correct nostalgic experience, but it's the best Transformers game ever made.

After spending time with it, the best way to describe it is to say that it looks and feels exactly like a playable episode of the TV show, except the action is more exciting and the graphics are better than anything animators ever painted on a cel. Coming from Platinum Games, it's a fast-paced beat-‘em-up that features five of the most well-known Autobots: Optimus Prime, Bumblebee, Sideswipe, Wheeljack and Grimlock. The Decepticons have a scheme to turn Earth into a new version of their metallic home, Cybertron, and it's up to the good guys to save the day.

Story-wise, Devastation is dead-on. The plot is goofy and doesn't exactly hold together 100%, but that's what great about it. It authentically nails the same loosey-goosey narrative that was in every episode of the TV show, and comes complete with the famous ‘symbol-switch' screen wipes to transition between scenes. If the gameplay were excised out, it would be an episode.

In terms of play, the controls are tight and satisfying, which is no surprise since it comes from the people who created Vanquish and Bayonetta. Each ‘bot has light and heavy attacks, and they also have access to ranged and melee weapons, many of which are instantly-recognizable—things like Prime's energy axe from Transformers: The Movie, or purple villain Shockwave in his laser weapon form. Everything can be upgraded, too!

Dodging at the right time lets the player go into a slow-mo mode to deal extra damage to frozen enemies, and turning into vehicles also plays a factor—besides being able to change into a car or truck at any time, altmodes are often used as the final blow in a combo. Seeing Bumblebee knock a foe down, transform into a car mid-air and then land and skid out on the enemy's face is pure joy.

Now I'm not usually one to spend a lot of time on graphics, but in this particular case, it's well-warranted. The cel-shading technique in Devastation looks flat-out amazing, and not only does it faithfully reproduce the style of the cartoon, it's honestly better. The ‘bots transform and animate smoothly, the colors are bright and clean, and everything looks just like it should. This stuff is flawlessly on-target and the best video game representation of Generation One I've ever seen.

While nearly everything about Devastation is glorious, it's not perfect.

After wrapping the campaign, it was disappointing to find that none of the Decepticons are playable in any mode. That seemed like a painfully obvious omission to me, and one that had me scratching my head. Likewise, I was hoping for more playable Autobot characters to unlock, but no dice. The extras that are included are limited to some challenge modes and random artwork… Fine stuff to have, but none of it is especially noteworthy or compelling. With such a great job done on the core content. It's baffling to see barely any icing on the cake.

I can't complain too much about the bonuses too much, though. Transformers: Devastation is a peerless piece of fanservice wrapped around a pretty enjoyable brawler, and the developers' love of the subject matter shines through as brightly as the sun. The good people of Platinum care as much about Transformers as I do, and their attention to detail and earnest attempt to bring Generation One to life has paid off in spades. It might not satisfy people who aren't already TransFans, but it's absolute gold for those who are. Rating: 8.5 out of 10.


Disclosures: This game was obtained via publisher and reviewed on the PS4. Approximately 6 hours of play were devoted to the single-player mode, and the game was completed. There are no multiplayer modes.

Parents: According to the ESRB, this game contains: fantasy violence. It's robots shooting and punching other robots, and it's based on a kids' cartoon. Nothing to get concerned about here, and there are no instances of salty language or sexual content. It's super-safe!

Deaf & Hard of Hearing: All dialogue is subtitled, and no audio is necessary for play. It's fully accessible.