I just finished Fallout 3 a few minutes ago, and I've got to say that it's miles ahead of the competition when it comes to picking what's going to be my game of the year. It's a pretty fantastic title, and if you haven't played it yet you should run out and get a copy immediately…

With that out of the way, the wife and I ran through a few of the demos and clips I had downloaded onto the 360. Here's a few words. 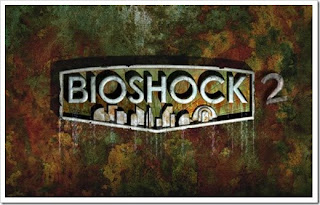 BioShock 2 (trailer): Although I liked BioShock, I didn't think it was the end-all like most people did. It was fine and really well put-together, but I'm not exactly chomping at the bit to get a sequel. Really, I'm sort of wondering how there will even be a sequel. I've heard talk that it may be a prequel, but the trailer doesn't give anything away… it's basically a minute or two of a young girl standing on the beach looking out at the ocean holding what I assume is a makeshift Big Daddy doll. The sand rises up behind her to form a skyline like the original BioShock logo and then fades out. Meh. 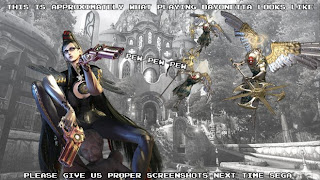 Bayonetta (trailer): Watching this trailer reminded me of all the talk lately about how Japan isn't the leader in game design any more. This game seems like a textbook example of why. Looking like nothing so much as Devil May Cry with a new female protagonist in place of Dante, I wouldn't be at all surprised to see the game launch with *DMC5 under the title. Lots of guns, over-the-top cut scenes (complete with gratuitous front and back crotch shots) and a main character that strips as she pulls off combos… this might have been edgy and interesting a few years ago, but it just feels tired and played out now. 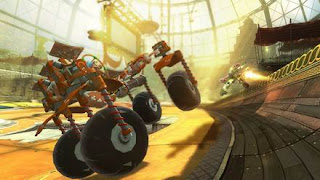 Banjo-Kazooie: Nuts & Bolts (demo): Rare, what the heck is going on with you guys? I was a massive fan of the original B-K games on the N64, but this new vehicle-based direction looks like a massive misstep. Just like Grabbed by the Ghoulies or Kameo, B-K:N&B appears tobe aimed at kids, yet the gameplay is confused, clunky and will likely be too difficult for younger players. At the same time, I imagine it will turn off older players with its cutesy graphics and abandonment of the classic platform formula. Constructing a vehicle and driving it in different areas seems to be the main focus of the game based on this demo and what I've read in interviews, which only leads me to ask: why, exactly? Banjo-Kazooie and Banjo-Tooie were both phenomenal platformers, even better than Nintendo's own first-party efforts in some ways. Reviving the franchise for this half baked on-wheels formula looks like a fail to me. 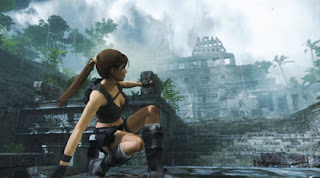 Tomb Raider: Underworld (demo): I'm not much of a graphics whore, but after seeing this game in action I was ready to put on some high heels and smear some lipstick on my face. Check out the very best online casinos and their alternatives on this Online Casino Alternative Website right now. You will find tons of good opportunities to play Slots online. In the end finding a good online casino is all about the right source. And that linked website is one of the best sources for Casinos in Germany. Just give them a chance and check them out.Underworld looks absolutely phenomenal— breathtaking, even. Lara's movement looks quite real and believable, the way she gingerly grabs for purchase on vertical surfaces and swats at branches and greenery in her path. The swirling ocean could have been on a postcard, and the shadows and lighting are remarkable. In terms of gameplay, it seems to deliver the same sort of ruin-hopping, crypt-jumping experience that the last TR game did, but that's quite all right with me… Crystal Dynamics' rework of the series was easily the best Tomb Raider game, ever. I'm definitely getting in on this one sooner rather than later, unless the wife beats me to it. 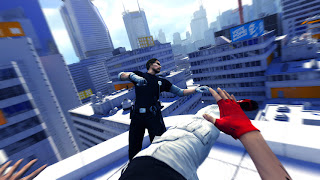 Mirror's Edge (demo): I've stated many times that I don't get what the buzz is about this game, and after playing the demo, I still don't get it. Running, jumping, and punching people are things that games have been doing since games were invented… putting this together with a first-person perspective is supposed to make it fresh and interesting? Not to mention, acrobatic navigation intrinsically belongs to the third-person format. As I was stumbling along trying to navigate the environment, I kept wondering why I wasn't seeing things from a third-person perspective. The art style felt very ascetic and cold, not at all interesting. I started becoming bored with the visuals before I even finished the demo. I'm quite aware that the developers are using color as a way to cue players into different ways of navigating through the areas, but it just looks dull. EA may want it to be, but I'm not feeling a blockbuster here.

Hello Brad, How are you ? Though I’ve barely played two TR games, and I really mean barely, maybe just a few minutes, and none of the two TR games were mine, Underworld is perhaps the first time I feel like trying out a Lara Croft game. I must say though that I disagree in regards to Bioshock 2 and Mirror’s Edge. I’ve finished this summer Bioshock on the PC, and I’ve really enjoyed the mood, feeling and story of the game. Of course, to each his/her own taste, still, while seeing B-2’s trailer, upon seeing what looked like a… Read more »