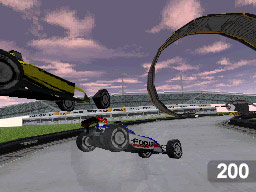 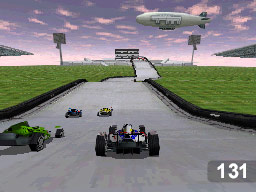 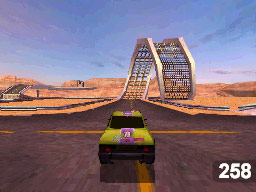 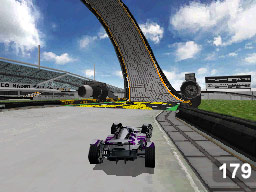 HIGH Lots of content for those who want it.

LOW The track creator needs a lot more work on the interface.

WTF There's no "real" racing in any of the modes.

TrackMania DS is the latest title released by fan-favorite publisher Atlus, although it's not quite what one would expect. Instead of something RPG-related or strategy-based, it's straight racing… well, sort of. According to certain sources, TrackMania has something of a following on PC, although I must admit I'd never heard of it before. Having no frame of reference to go on, I had to take the game at face value.

Made up of three separate modes (Race, Platform, and Puzzle) and a hundred tracks, it initially seems like a pretty beefy package for car nuts, especially being on the DS. All told, it's not a bad project, but probably not quite what the average racing fan is used to.

The Race mode isn't quite racing per se, it's more about getting the best time on a particular track while being pitted against ghosts. A slightly modified time trial mode, really. It's perfect for gaming on the go since each track is nicely bite sized and there's something addicting about trying to get a gold medal time, but it doesn't feel as substantial as it could be. There's no sense of actually racing against other cars since they're just ghosts that can be passed through, and the handling leaves much to be desired. 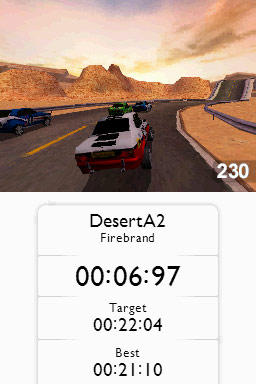 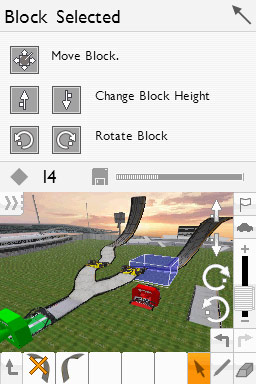 Platform mode is all about getting to the end while dodging the numerous pitfalls along the way. Plenty of ramps, jumps and curves on an elevated track provide quite a different experience than the Race mode, but I can't say that it's actually better. With the handling feeling so floaty and loose, it's inevitable that the player's car will take countless spills. After a while, I felt as though this mode was more about perseverance than it was about stunt driving.

Puzzle mode works hand-in-hand with the game's comprehensive track creation system. Given a set number of pieces, players assemble the track themselves in hopes of creating a path to the finish line. It's entertaining enough, and I will say that the options available were surprisingly robust when leaving Puzzle mode and going straight into creating my own track. Although it was disappointing that most of the options needed to be purchased (money can be earned by completing other portions of the game) it was a lot deeper than I expected. That said, I felt as though the interface needed more work. It was never as seamless and easy to use as something like this should be, the game often misreading my inputs and an optimal view being nearly impossible to attain. In general, there was a slightly cumbersome air to everything about it.

Although I personally wasn't too impressed with this offering, I will say that my son (age 7) absolutely fell in love with it. I couldn't pry the DS out of his hands after I let him have a go, and it kept him quite busy for substantial stretches of time. In the game's favor, there are no real penalties for failure, and restarting comes quick and easy. He really ate up the track creation mode too, warts and all. Every ten minutes or so he'd have a new track for me to try, and any game that can get a child's imagination working to such a degree can't be all bad. Rating: 6.5 out of 10.

Disclosures: This game was obtained via publisher and reviewed on the DS. Approximately five hours of play were devoted to the single-player mode, and the game was not completed. No time was spent in multiplayer track-sharing modes. (The game supports four-player multi, and tracks can be shared. These features are only available in local WiFi though… no online play.)

Parents: According to the ESRB, this game is rated E for Everyone, and is appropriate for all players. There is nothing going on but racing here, so feel free to let the little ones have at it.

Deaf & Hard of Hearing Gamers won't have any problems. There is no dialogue in the game, and no significant auditory cues. It's all about the cars, people.