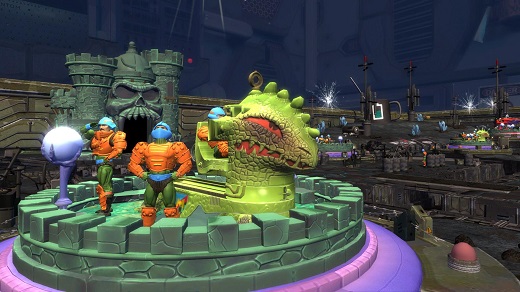 HIGH Holy crap, He-Man and Cobra Commander are in here!

WTF How in the world are these loadtimes so atrocious?

When Toy Soldiers debuted on the Xbox 360 in 2010, it was the definition of ‘surprise hit' and deservedly so. Signal Studios took the static Tower Defense genre and gave the player a way to actively engage in what was usually a passive, disempowering experience. Even better, they couched the whole thing in a fanciful conceit—every battle took place in a child's room, and every soldier was a plastic toy. It was brilliant.

The follow-up, 2011's Toy Soldiers: Cold War, continued the same ideas and themes but energized them with a good dose of 80's action figure worship and the jingoistic flavor so prevalent during tensions between the US and the Soviet Union. They took a good game and made it even better.

It's now 2015, and the third entry in the series, War Chest, is here. Unfortunately, the third time is most definitely not the charm for Signal. Although it initially seems like they're boosting things to the next level, time spent reveals a soulless, lifeless title that can't match its predecessors.

In a macro sense, War Chest maintains the same winning formula—take an army of toys and defend a toybox from all incoming invaders. Various waves of infantry, armor, and flying units will try to take it out, so the player must set up defensive units (turrets, basically) at specific points on the map. Upgrade them, change them up depending on what wave is coming next, and whenever things are getting too hot, the player can take direct control of any emplacement for more precise shooting or to focus on a more important target.

Given Signal's solid track record, it seemed safe to assume that War Chest would be at least as good as last two entries, and theoretically better since it's running on beefier hardware, but that's just not the case. Everything here feels sloppy, and not nearly as dialed-in as it should be.

For example, there's no story to the campaign, and some of the battles start in medias res, resulting in a jarring, confused feeling, generally requiring a restart or two to figure out what's going on. The player is only ever on defense, despite offensive mechanics being in place online. Matches feel extremely long and exhausting, running for twice the length they should. I couldn't do more than two missions before getting bored and feeling like I needed to move on to something else.

Getting back to hardware, War Chest didn't get the memo that it's now on the PS4. Being a big step up from the last generation, I expected a few more bells and whistles, but there aren't any to be seen. The character models are too basic, the game sports crude hand-drawn interstitial art which looks like a series of placeholders, the camera still doesn't quite move the way I'd like it to (a persistent issue since the original), changes I made to the settings never saved, some of the enemy characters are incredibly small and hard to see, and there's noticeable slowdown when large numbers are on-screen.

However, none of those things compare to how abysmally bad the loading times are. I am utterly mystified by how long the game takes to get going given that nothing seems anywhere near the limit of what Sony's box can easily handle. The forced pauses between matches were infuriating, and there were times when I shut the game off rather than sit through them again.

This widespread lack of polish extends to the multiplayer mode as well. For example, there's no explanation of how the online works—I started a match with no information given, and couldn't figure out why being on a team was mandatory, nor could I understand how my random partner was able to use the normally-limited elite characters constantly. Were we sharing money, or were we not? How do attackers work? While I was trying to suss all this out, my controller was constantly locking up and leaving me unable to participate, so I quickly gave up.

The only strong point War Chest can tout is the addition of licensed toys. Besides the developer's own archetypical forces, the player can buy DLC that adds G.I. Joe, Cobra, Masters of the Universe or Assassin's Creed themed armies. It's a genuinely cool idea, but even this doesn't feel as strong as it should.

For starters, the various units are basically re-skins of the basic emplacements, and half of the figures are relegated to the online mode. Worse, the most iconic hero characters—He-Man, Duke, Cobra Commander and Ezio—are hamstrung.

In order to use any of them, the player must rack up combos by killing enemies and filling up a meter. Maybe my skills aren't up to par, but I found it incredibly hard to do so. I rarely got to use any of these characters, and I was never able to get their upgraded modes into action. I'd been looking forward to seeing He-Man ride into action on Battle Cat since the content was announced, but I never managed it. These meters need to be adjusted because the paid stars of the show aren't appearing as often as they should.

The licenses being underused is a shame, since seeing toys I actually had as a child was great. He-Man's Dragon Walker functions as an anti-armor cannon, and the Cobra Maggot shows up as an artillery emplacement. Even better, certain upgrades give some of the toys kid-inspired customizations. In one instance, a Cobra bunker got a "sniper scope" by having a pair of binoculars duct-taped to its roof. Another cannon has Christmas lights wrapped around the barrel for "rapid fire" and attaching two cigarette lighters to flak cannons increased their damage. Little touches like these that call back to childhood are fantastic, but the brief flashes of spirit and creativity don't extend to the experience overall.

As a big, big fan of the previous Toy Soldiers games, it was tough to see War Chest falling so short compared to the other two. Even after putting comparisons aside, it barely stands on its own thanks to poor production values and technical problems. The idea to include real-world toys was genius, but paying extra to use them in this undercooked experience is a bit much. I hate to say it, but there's little reason to invest in War Chest when the older, last-gen titles give a better bang for the buck. Rating: 4 out of 10


Disclosures: This game was obtained via publisher and reviewed on the PS4. Approximately 10 hours of play were devoted to the single-player mode, and the game was not completed. 1 hour of play was spent in multiplayer modes.

Parents: According to the ESRB, this game contains: tobacco reference, and violence. It may be rated T, but it's super-safe for kids, if you ask me. It's all about plastic toys shooting each other with absolutely no blood or gore. If you object to guns then maybe stay away, but otherwise it's totally fine.

Deaf & Hard of Hearing: There's no story in the game, and no audio cues necessary for successful play. It's fully accessible.

What’s even worse then is that I don’t know any of those characters you speak of. He-Man, Masters of the universe, GI Joe, Cobra? I don’t even think those toys were ever sold here. I had Action Man 🙂