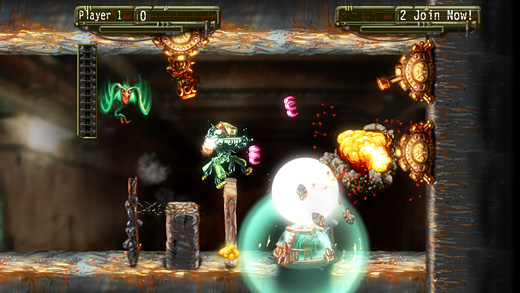 My Toy Soldiers review just went live over at GameCritics. While I'm on the subject, I actually interviewed Max Wagner from that studio a few months before the game actually came out. I'm currently in the process of trying to arrange a follow-up interview, so if you have any questions or things you'd like me to ask, drop me a line.

Although the release of Explosionade was delayed for a while thanks to some screwy activity on Microsoft's Indie service, the latest from Mommy's Best Games is now available for download at the incredibly reasonable price of one dollar. I purchased my copy on the spot and played through the entirety in one sitting. If you are a fan of old-school platform-shooty action, then you definitely need to check this out. I'll be doing a review of the game in the next couple days, but I'll save you the wait: it's great, and you need to buy it. Like, now.

I've mentioned it before, but I do want to throw out another plug for Alice in Wonderland on the DS. I will probably have finished the game by the time you read this, and although it was a bit slow at times and had a few frustrating parts (mostly due to my own self-inflicted collection-oriented OCD) I really think it's a superior title.

While it essentially follows the same storyline as the Tim Burton film (which was atrocious) the art style is quite dark and moody, and the gameplay can best be described as ICO-lite—the player controls one of the Wonderland residents and Alice tags along behind.

There's a bit of combat which never gets too interesting, but it's more than made up for by the puzzles. Each of the main characters (White Rabbit, Cheshire Cat, Mad Hatter, Caterpillar) has their own set of powers which can be used to navigate obstacles. For example, the Rabbit can alter the flow of time with his giant pocket watch. The Cat can make things appear and disappear, and the Hatter can see different dimensions of each level.

The developers clearly put a great deal of effort into this project, and it's not at all the movie cash-in that you'd expect. If you're in the market for something tastefully left of center for the DS, I'd say that Alice in Wonderland is certainly worth a look. 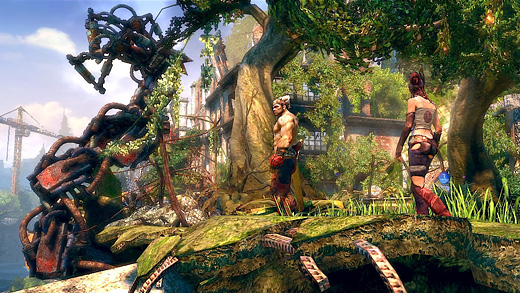 On the console front, I'm about three quarters done with Enslaved: Odyssey to the West. I went with the 360 version after playing both 360/PS3 demos because the graphics seemed cleaner and sharper (on my particular setup, anyway) and I'm happy with the choice.

In general, it's a pretty good game. I've mentioned a few times that I was not a fan at all of Heavenly Sword, but developer Ninja Theory has stepped it up and turned out a fast-moving adventure that I think most people would enjoy. The characters are likable and the adventure is well-written for the most part.

In terms of action, it's a bit on the shallow side but the pace moves along at a good clip, and there are plenty of showy setpieces to keep a player's attention.

I'll have more to say when I turn in my full review, but at this point I'm giving it a pretty solid thumbs-up. I don't know that I would necessarily recommend it at full retail price of $60, but it would make a pretty fantastic weekend rental—which is a good segue to my next point.

Earlier in the week I sent out a tweet saying that retail games need more viable price points. I fully believe that the current industry business models in place are absolutely outdated, and a serious shakeup needs to happen in order for growth and sustenance to be able to happen in a healthy way.

The reason I bring this up while speaking about Enslaved is that (like I said above) it's certainly a good game and I'm enjoying it, but it doesn't feel as though it's worth $60. I mean no disrespect to the developers or the publishers because it's a fine product, but it is a product that I think most players will go through in two or three sittings, and likely never touch again. It's a thrill-ride with cinematic flair, but that type of experience doesn't seem to possess the kind of value that I mentally associate with that much money.

If different price points were available for different kinds of games, I’d feel much better about recommending good ones to my readership.

Staying with Enslaved as the example, it's certainly a fun game and if it was priced at $30, I’d have no problems telling everyone to run out and buy it. At $60, I'm just not comfortable suggesting that the quality-to-quantity ratio is justified. Although it's true that as a critic I do receive plenty of free software to review, I do actually buy plenty of games with my own cash and I work hard to earn the money that goes into my wallet. I haven't lost sight of what it feels like to be a retail consumer.

While I say again that I enjoy Enslaved, it's hard for me to accept that buying a brand-new copy costs the same as it did to buy something like Fallout 3. The one-size fits-all mentality of retail pricing doesn't make any sense, and I think everybody knows it.

I would personally love to see more publishers acknowledge this reality and start experimenting with different price points. To be quite honest, I think it would benefit everyone involved—consumers would feel as though they got fair value for the money, publishers would sell more since more consumers would be willing to pay lower prices for titles that aren't AAA infinite-replay blockbusters, and all parties would come out ahead.

[quote]I would personally love to see more publishers acknowledge this reality and start experimenting with different price points. To be quite honest, I think it would benefit everyone involved—consumers would feel as though they got fair value for the money, publishers would sell more since more consumers would be willing to pay lower prices for titles that aren’t AAA infinite-replay blockbusters, and all parties would come out ahead.[/quote] I agree with this in general but there’s a danger it might go too far. Different price points implicitly means the game needs to be packaged in different ways, so that the… Read more »

I see this playing out in different way however. Assume that developers did space their releases along different price points. I don’t think they would do it necessarily along the lines of which titles they think are the best, but which titles they think have the largest mass market appeal. Marketing for the higher price titles would most likely stay intact, while lower price titles would have smaller marketing budgets. My thinking is that you would actual end up with titles that are of excellent quality in the lower price brackets, simply because developers are apprehensive about how they would… Read more »

I also remember when there were a wide variety of price points that one could choose when purchasing games . And while agree with the post, I don’t think that we will be seeing any lower cost titles in the near future. I think Developers fear that consumers will pass over games, because of the mentality that if a game cost less it must be of lesser quality. The current industry model depends heavily on early advertising to build up demand for new titles. Lower prices would mean smaller advertising budgets and a heavier reliance on word of mouth to… Read more »

This is another area where it seems like gaming has taken a step back from the previous generation.

On the PS2 at least, games were released for all kinds of pricepoints. On the PS2 alone, Sony released many of their first party titles for 40 bucks, God Hand came out for 30, Persona 4 was 40 IIRC, and there were scads of games reaching shelves at 20 bucks right out the gate.