Where Can I Get a Commando Action Figure? 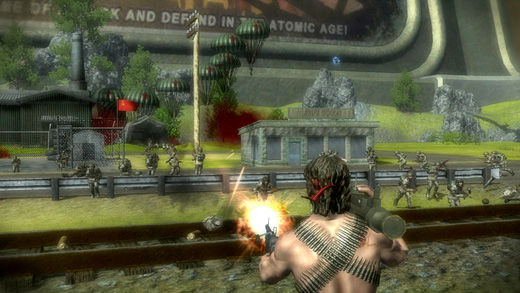 HIGH Passing critics I respect on my leaderboard (temporarily!)

LOW The final campaign level is tough to complete with a good score.

WTF The lava in the lava lamp doesn't move. Outrage!!

For some strange reason, the first Toy Soldiers never got its due.

Released March 2010, the unusual hybrid of Tower Defense and real-time combat slipped under the radar of the critical sphere and remains an unknown quantity to many. However, despite the lack of general recognition, the game went on to become one of Xbox Live Arcade's all-time top sellers. In fact, the sales numbers of its DLC dwarf the total sales of most regular XBLA releases, and for good reason—it's fantastic. Toy Soldiers: Cold War

is the sequel to that quiet success, and it's every bit as engrossing as the first game.

For those that haven't played it (yes, I'm talking to you) the original Toy Soldiers took soldiers and equipment from World War I and converted it into plastic figurines. Shrinking the scale of the conflict down to fit inside an imaginative child's bedroom, players were tasked with placing artillery, machine guns and mortars to stand against waves of enemies bent on capturing a toy box headquarters. The twist was that players could jump into any piece of equipment and use it in real-time. That anti-aircraft cannon not doing its job? Take over and shoot ‘em down yourself. An oncoming horde of tanks? No problem, control a biplane loaded with bombs and push back.

As someone who does not particularly enjoy the Tower Defense genre, the empowerment afforded by this design decision was a revelation, and turned something frustratingly passive into something more empowering and engaging.

Leaving World War I behind, Toy Soldiers: Cold War works from the same template but instead draws inspiration from the 1980s and G.I. Joe. Along with the updated aesthetics are a slew of new features that increase the degree of player involvement I enjoyed so much, amplifying it to the next level.

For example, score bonuses and powerful special attacks like a Rambo-styled commando or an overwhelming nuclear bomb can only be earned when a player is actively engaging the enemy. Besides that, players can instantly force the next wave of attackers to hit after wiping out the last one, eliminating pace-killing downtime and keeping the action high. Even the levels themselves have been designed to be more conducive towards high-intensity play thanks to open layouts and less obstructive verticality. There are also a slew of smaller tweaks, but in general, every aspect of the game has been tuned to avoid the slow pace and wait time of most Tower Defense titles. Needless to say, these are all things that show the devs putting a lot of thought into how their work actually works and then kicking it into high gear.

Another great move in Toy Soldiers: Cold War is the level of information given to the player, along with prevalent leaderboard integration. Players who like goals to aim for will have their hands full (in a good way) with several tiers of things to tackle. Of course there are the Achievements, but there are also in-game awards and loads of things measured between players like number of shots fired, the furthest an enemy has been blown into the air, how many tanks have been destroyed, and so on. Combine those things with dynamic rankings that constantly let players know how they stack up against their friends, and even people who normally don't care for one-upsmanship or score (like me) will soon find themselves putting in more effort to increase their standing. The constant comparisons are a brilliant thing that add an entirely different layer of challenge to the game.

While it's pretty clear that Toy Soldiers: Cold War is an above-average addition to the XBLA lineup, I do have to admit that I have a little bit of difficulty with the camera. Given the superior level of craftsmanship in every other aspect, I was surprised to find that it was sometimes quite difficult to find an optimal viewpoint. The overhead bird's-eye view works, but it sucks all the excitement out of play. On the other hand, the standard camera view is often too low to the ground and doesn't provide a sufficient level of situational awareness. Rather than allowing the camera to simply zoom out to a more comfortable view, it's almost as though it's mounted on an invisible track that prevents freedom of movement. It's not game-breaking by any means, but it was noticeable.

Apart from the issue with the camera, I've got nothing but good things to say about Toy Soldiers: Cold War

. It looks great, it's easy to get into yet offers several levels of strategy, there's plenty of content for the price of purchase, and players with friends will get an extra benefit out of the ever-present leaderboards and generous multiplayer options. Signal Studios took what was already a great game and made it even better, and that's no easy thing. My hat's off to them, and I'm definitely looking forward to their next project. Rating: 8.5 out of 10.

Parents: According to the ESRB, this game contains violence. Although the game is about "toy" soldiers, it's effectively about mowing down hordes of enemy men and vehicles. Humans getting shot happens frequently and in great numbers, so be aware. That said, there's no blood or gore, and enemy soldiers stiffen up and topple over like figures when shot. My feeling is that it will be appropriate for most kids old enough to handle the pace of the action.

Deaf & Hard of Hearing: You won't have any issues. The only dialogue in the game consists of voice samples added for flavor during gameplay. They aren't subtitled, but they're brief and don't pertain to anything happening onscreen. There are no significant auditor cues during gameplay… It's perfectly accessible.