It may have taken a few decades, but I'm happy to say that Transformers are now fully accessible to all ages. What do I mean? Aren't they already *toys*???

Although Transformers has traditionally put out each year's line with multiple tiers of complexity and price (usually $5 = simple and small, $10 = medium and pretty cool, $20 = bigger with gimmicks, $40 & up = huge with electronics), it's always been a problem that some hot ‘bots were put out in models that were not fit for younger kids to play with. For example, Optimus Prime has always been cool but sometimes he was only available as a $20 or $40 deluxe piece, not kid-friendly at all.

As a fan from way back, I'm pretty much going to buy whatever they put out regardless. However, as the father of a small boy, trying to get him into my hobby has been a little frustrating to say the least due to the way the figures were separated into different "castes", as it were.

He's always wanted to have Transformers of his own and always had favorites, but I'd usually have to pick some up first myself to see which ones had a transforming process that was within the realm of his manual dexterity and comprehension ability. I didn't mind at all, and in fact I would recommend the same thing to other parents so as to be even more familiar with what their children are doing, but the bummer would be when he'd have his eye on a particular ‘bot that looked really cool but was simply beyond his ability to play with successfully—I'd rather he not have Transformers than have Transformers that make him angry and frustrated because he can't change them.

With all eyes on the new Michael Bay film (god, let it be good…) Hasbro's marketing minds have finally caught on to the fact that a large portion of their potential audience are shorter and younger than us O.G. hardcore Transfans. Little hands may not be quite as adept, but they still want the same robots that the big boys have.

The solution? Three distinct tiers featuring most of the same robots, all with different levels of sophistication and completely different sculpts. I'm extremely impressed with the decision to take the concept further with a greater focus on including a wider age range. Although some may grouse that it's lame to have the same characters made multiple times in different styles, I only see it as good. 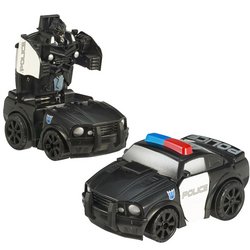 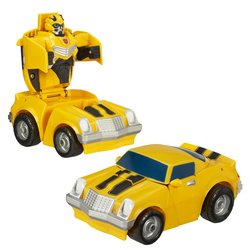 The youngest-skewing line is the Cyber-Slammers. Barely more than cars where the passenger cabin flips upwards, they also pack pull-back-and-go functionality and are perfect for the littlest ones.

The middle line is the Fast-Action Battlers. These are the ones I'm most pleased with. Although they're the same ‘bots as the regular line, they all have simplified transformations and sturdier construction. 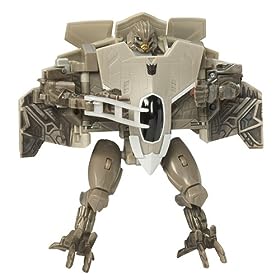 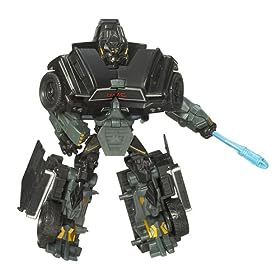 Of course, I never want to see Hasbro skew completely towards the lower age ranges, and they've got my back. The "standard" line starts at the $10 range and goes upwards as it usually has. Although the new techno-organic-like designs are a little on the shocking side to someone who grow up with Generation One (the era of the original 80's cartoon), they're still putting out quality figures with some very interesting mechanics and ideas to tie into the film.

Overall, I'm extremely glad that Transformers is still around and still popular enough to keep putting out new toys year after year, but this year was a particularly good one… I think it was the first time in memory that my son and I could both go to the toy aisle, choose exactly what we wanted, and each leave with something we were both happy with.

I hear you, but i’m going to wait and see the film before i pass judgement… who knows, maybe this “re-imagining” will actually turn out to be another big positive turning point. after all, fans decried Beast Wars as the coming of the apocalypse, yet by the time it was all said and done, it was the best TF TV series ever, and a lot of the toys were incredibly good. doing my best to stay positive and hope for the best here. ; )

My real problem with the new Transformer toys isn’t how much they cost or how hard they are transformed. I’m more bothered with the designs. I don’t like Transformers trend to look more 1.) Space Age-ish and 2.) “xtreme basketball sneakers” modern. What made the original designs appealing (to me) is minimalism. The color schemes were limited and the robots’ appendages didn’t look like scrap metals. And despite its rather subdued nature, you could look at the robot and be immediately aware of his personality. That’s not the case with the movie’s designs (as are the more modern transformer toys).… Read more »