A Pleasant Reminder of Days Gone by 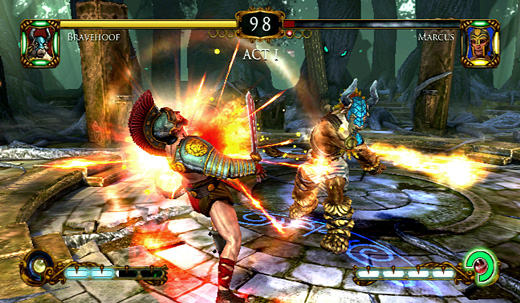 HIGH Nailing an enemy with a steak and watching a lion pounce from off-screen.

LOW Trying to pull off the QTE inputs for some of the special moves.

WTF "My hatred of men gives me strength."

Except for a small bump of interest (and nostalgia) triggered by Street Fighter IV, it's clear to see that the fighting genre has been flagging over the last few years. Treading water and stuck in the doldrums, the trend has been for developers to cater to the hardcore players, steadily increasing complexity of systems, guards, counter-systems, guard-cancels, counter-system-guards and guard-counter-cancel-cancels to the point that new entries are inscrutable to all but the most dedicated fans. That kind of thinking only leads to diminishing returns and an isolated fanbase, so I'm happy to report that High Voltage Software has bucked the trend and struck out in their own direction.

Tournament of Legends is most certainly a fighting game, but it's one that hearkens back to a different time—specifically, the early '90s. In those days, the fighting genre was the hottest thing in the industry. On any given day during any given week, a trip to the local arcade might very well have revealed a brand-new title (or three) vying for a piece of the fist-flavored pie that Capcom had baked. It was a wild time, full of innovation and crazy ideas. Of course, not every game was successful (or even good) but that spirit and energy were quite exciting. That same energy and willingness to be different is present in Tournament of Legends.

Starring ten weapons-based characters plucked from various pantheons of mythology, High Voltage places the cast in a 3-D framework, and allows control with either the Wiimote/Nunchuk or Classic controller. (Take my advice and use a Classic.) Featuring nice touches like simple combos, an on-screen indicator when enemies are within striking range, and an easy-to-grasp set of moves common to each character, Tournament's focus is not on competitive-level play, but in opening up the genre to people who don't want to make it their full-time occupation.

(…And before the hate mail starts rolling in, I'm not saying there's anything wrong with high-octane fighters. I'm just saying having other options is immensely appreciated. It's also necessary.) 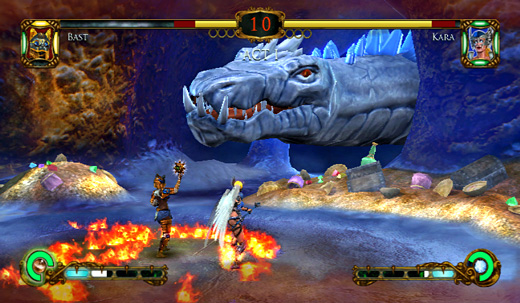 While there is definitely a difference between a heavy hitter like the statue of Jupiter and a quick, light striker like Narcia the gorgon, at their core they both control the same: three standard attacks, four special attacks, a block, an attack modifier, a weapon toss and an Enchantment. It might seem like a lot at first (especially to fighting newcomers) but it becomes second nature almost immediately. Once the control is mastered with any character, those skills carry over to the rest of the roster. Some may see this uniform template as too simplistic, but compared to other choices on the market, it's a breath of fresh air. Of course, this means that Tournament doesn't have the same depth found in more esoteric fighters, but not having to jot move strings down in a notebook and take time off of work to learn a character were big pluses.

Speaking of the characters, I do want to praise the developers for putting together such an odd, likable bunch. It's extremely rare that the entire cast of a fighting game appeals to me, but as a lover of mythology, Tournament of Legends is one of those beasts. Really, there's something here for everyone—choices include strapping gladiator Marcus, scantily-clad Valkyrie Kara, raging minotaur Bravehoof, Egyptian cat-headed god Bast, death-god Thanatos in ravenfeather garb, clockwork automaton Volcanus, and of course, no game of this sort would be complete without at least one skeletal warrior. In this case, the fearsome bones in question happen to be female—a very nice twist on the expected.

However, a game sporting this cast and this fighting engine would never work as a straight-up "serious" fighter—which it's not. Although it's a high-quality effort and the enthusiasm of the dev team is palpable, High Voltage was smart to slant Tournament of Legends towards the lighter side. It's not a straight-up comedy game like Clay Fighters, but it's not overly melodramatic either. In my view, it successfully navigates the middle ground between grim and giggles by including backgrounds and  Twilight Zone­-esque endings for each character, while also including goofy special moves and tongue-in-cheek dialogue quoted from cult films. This dichotomy feels right to me, and such an ephemeral quality is one that fighters haven't seemed to nail for quite some time.

Honestly, Tournament of Legends reminds me of nothing so much as the Mortal Kombat series back before it became a slack-jawed, pantsoiled parody of itself. There's an extremely similar sort of earnestness and tone to Tournament—the action is loosey-goosey but it's absolutely serviceable for noncompetitive sessions, the characters are all well-designed and likable in a quasi-cheesy sort of way, and both fighting newcomers and seasoned vets can get enjoyment out of the formula here. Guru players posting how-to videos on YouTube might not get a lot of it, but those craving a fighter that doesn't require slavish dedication will find Tournament of Legends to be a very welcome offering, and one that comes at a budget price, to boot. Rating: 8.0 out of 10.

Parents: According to the ESRB, this game contains blood, mild suggestive themes, and violence. Despite the warnings, I found the game to be fairly harmless. Most of the characters are fantasy monsters of some sort and the violence isn't very graphic or bloody at all. The female characters are scantily-clad, but nothing more revealing than you'd see on prime-time TV. All in all, I felt fine having my son play it. As long as parents aren't opposed to fighters in general, I think it's a decent, approachable title for kids.

Deaf & Hard of Hearing: You won't have any problems. All important info is presented onscreen and there are no significant auditory cues during play. Text accompanies voiceovers during the beginning and closing cut-scenes although there's none for mid-match taunts, but overall it's very accessible.