Great seasoning, but short on steak 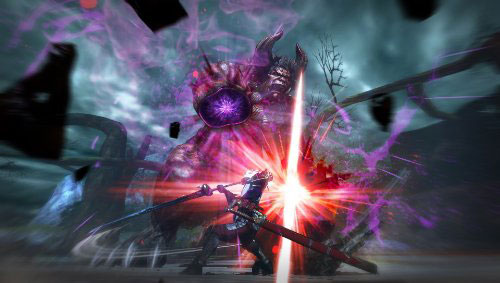 HIGH Fixes some issues that Monster Hunter fails to address.

LOW Not nearly enough variety in all aspects.

WTF How can Hatsuho possibly walk in those shoes?

Although it's still niche here in the states, Capcom's Monster Hunter is a Japanese cultural phenomenon, and there are many who want a piece of that action. However, few clones trying to duplicate that success understand what makes the series work, and even fewer can approach its nuance and depth. Toukiden: The Age Of Demons

is the latest challenger trying to grab a slice of Capcom's pie. It's a noteworthy title that bests its inspiration in a few ways, but never comes close to topping it.

Before going further, I'm sure some may think it's unfair to directly compare Toukiden to Monster Hunter, but there's no getting around the fact that Omega Force's work is nearly a note-for-note copy. From the overall design to most of the concepts, the ‘inspiration' couldn't be clearer. On the other hand, it's been said that if you're going to steal, you should steal from the best, and there's no shame in wanting a similar level of success.

In any event, the premise is that a Samurai-flavored land is under siege from invading Oni demons, and the player is a member of the last line of defense. The play is third-person real-time action that's all about taking down monsters both large and small. There's an array of weapons to choose from—impressive longswords, a mean-looking sickle and chain, a pair of speedy daggers, and more. Before going on a mission, players will also have the option to choose up to three AI characters to quest with.

While everything about Toukiden screams Monster Hunter, the difference is in its details, and this is where Omega Force makes some smart decisions. For example, many newcomers to Capcom's work are taken aback by dreadfully slow tutorial missions that don't teach much useful info. Other common complaints include things like the lack of visible life bars for the monsters, not enough story, an unsatisfactory camera lock-on system, complicated crafting and resource systems, and more. Toukiden is aware that these things are deterrents for some players and has addressed them all. As such, the game is approachable and easy to jump into. It takes no time to grasp what's going on, and this rapid rev-up is a good thing.

However, once past the first couple of hours, Toukiden's weaknesses start to show and the game loses steam quickly—it's just not deep, detailed, or nuanced enough to sustain long-term play.

For example, each weapon type has interesting mechanics, but working towards bigger and better weapons is a big part of this genre, and the upgrades available don't feel diverse enough. The same goes for the armor. Although there are different outfits, they don't have many effects or benefits to them, and I felt little desire to craft anything unless it had a big step up in attack or defense. I did appreciate the game's unique system of equipping guardian spirits that grant the player special powers, but again, it's just not enough.

Even worse than the thin selection of equipment was how quickly repetition set in. After playing for about fifteen hours, I had only seen four types of boss Oni and I was quite tired of fighting them over and over again, a problem compounded by having little incentive to craft items made from their lopped-off parts. Apart from the bosses, Toukiden frequently asks players to clear zones of trash mobs, or to kill X numbers of small fry. These runs aren't interesting, and there's little challenge or feeling of progress for having done them. They're just filler.

It might sound strange to say after outlining my dissatisfaction with it, but Toukiden

is still the strongest of the Monster Hunter clones available stateside, and would make a solid entry point for players interested in trying the genre. On the other hand, it's an obvious clone which can't match Capcom's quality. Toukiden isn't a bad game but it's nowhere near as good as the best, and the best is readily available. Omega Force gets credit for the smart tweaks, but this effort is still a distant second place overall. Rating: 6.5 out of 10


Disclosures: This game was obtained via publisher and reviewed on the Vita. Approximately 15 hours of play were devoted to the single-player mode, and the game was not completed. 1 hour of play was spent in multiplayer modes.

Parents: According to the ESRB, this game contains: Alcohol Reference, Blood and Gore, Mild Suggestive Themes, and Violence. Despite the warnings, it's pretty harmless. The characters slash up quasi-demonic monsters, but it wasn't particularly graphic to me, and the characters can sometimes visit others in a hot spring bath-type situation, but it's all safe for teens. Nothing too extreme here.

Deaf & Hard of Hearing Gamers: No problems here. All dialogue is subtitled, and no audio cues are necessary for gameplay. I played several hours with no sound, and had no difficulty at all.

I definitely don’t think I was giving a stern glance for anything other than not offering enough content. I’ve got no problem with people trying to jump into the genre. As for why i can’t put up with trash mobs, it’s because they’re boring. seeing four boss Oni in fifteen *HOURS* is a ridiculously glacial pace, far slower than MH by far. expecting players to be happy culling trash mobs when the genre is about hunting big game is an unwise decision. with all that said, Toukiden still got a reasonably favorable review and I recommended it to newcomers, so… Read more »

While Toukiden is certainly a ripoff, it only exists because Capcom chose to ignore the Vita as a Monster Hunter platform. I think the developers should be given a round of applause, rather than a stern glance, for derivatively filling a void that should already be filled by Capcom. This game is doing Vita owning Monster Hunter fans a favor and deserves credit for that. Also Brad, not counting color swaps, there are a total of 12 types of Oni bosses in Toukiden. Sorry you got bored so quickly. Honestly if you can put up with all the item farming… Read more »