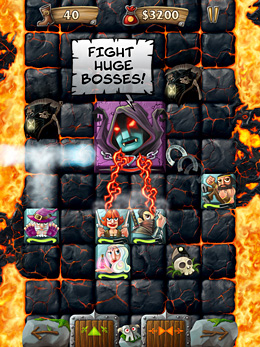 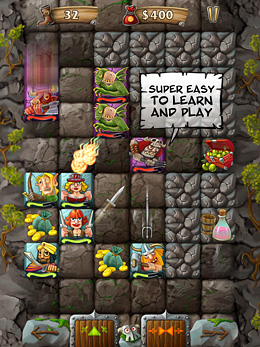 A perfect game to be filed under the category of "plays much better than it looks", I am a little embarrassed to say that I almost skipped over this one while browsing through the App Store, but I'm incredibly glad that I didn't—it quickly became one of my favorite iOS games, period.

Although it's a little tough to describe, Rune Raiders is a tile-based action/strategy game that lets the player form a party of colorful characters in order to tackle a series of stages filled with enemies. These stages are shaped like long hallways that scroll vertically, and they are set up with different configurations of obstacles and monsters.

Each character has their own special attack and attack range, so choosing which ones to bring along and how they will function in each stage gives the game a satisfying level of depth, yet keeping it very approachable to people who may not be strat wonks. Plus, it's just too cute! 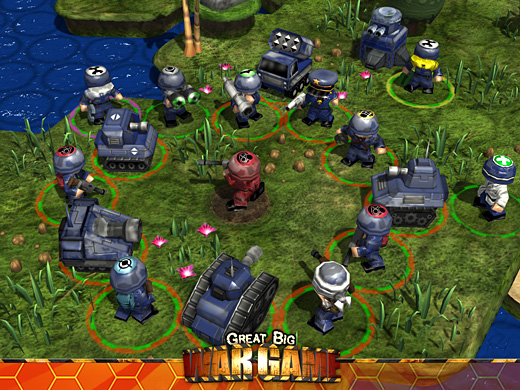 It's not very often that I find a game that I like and dislike in equal amounts, but it does happen, though. Take Great Big War Game, for example. It's a top-down turn-based strategy game quite similar to something like Nintendo's Advance Wars. There are bases to capture, units to create, generals to snipe, and a series of maps to dominate. The basics are all dialed in and will be quite satisfactory for anyone who enjoys this sort of formula.

On the other hand, I have to say that the aesthetics leave me quite cold. I don't care for the character designs one bit, and the goofy or silly tone that it's shooting for falls flat. The graphics on the battlefield aren't the most attractive, either. Maps are hex-based, and it shows to an unappealing degree. In my view, the game would have been better off going for something hand-drawn instead of a style that's crudely modeled in 3D.

Looking solely at the gameplay, Great Big War Game delivers. On the other hand, there is more to a game than just the gameplay itself—appearances do matter. From that perspective, it's in need of a little help. 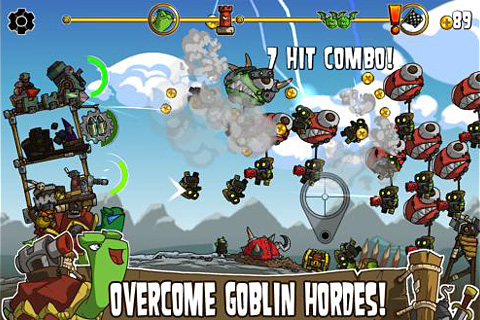 There's nothing I hate more than seeing a game with a lot of potential go unutilized, but that's exactly the case with Shellrazer. In this title, the player controls a giant tortoise with a series of gun platforms on its back. These platforms can stack three-high, and feature all sorts of different weaponry—everything from standard machine guns and cannons to flying blade-shooters or wizards in a miniature library casting lightning spells.

The tortoise walks slowly from left to right automatically, so the player chooses one weapon at a time and focuses on taking out oncoming hordes of enemies. Between missions, players can purchase several upgrades for the guns and super-attacks for the turtle, giving freedom to players who want to formulate their own attack style. It's a simple game, but it works well and the hand-drawn 2D art is quite attractive.

All of this sounds great so far, but the problem with Shellrazer is that it gets repetitive as Hell. Although there are minor variations in the number and types of enemies the player must limit, each stage basically plays out the same. There are no surprises or changes in the formula, nor any bosses or mini-games to break up the monotony. By the time I got through half of the game's 50 stages, I was feeling burned out and ready to move onto something else.

The core of what's here is great and the concept is pure gold, but without a greater variety in gameplay, it doesn't begin to tap its full potential. My fingers are crossed for some substantial updates or an improved sequel. 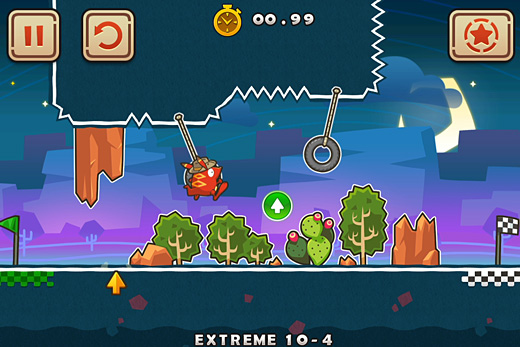 While I definitely appreciate in-depth experiences when I've got time, I've often got only a minute or two during the day. Under such circumstances, a game that comes in tiny, bite-sized servings is just what I'm looking for. Run Roo Run! is one such title, and it does great job of meeting my micro-gaming needs.

In this title, the player controls a kangaroo whose joey has been roo-napped. In order to reunite, 420 stages must be completed, and as one might expect, they all have to do with jumping. A lot of jumping. Although that seems like a tedious amount of content to get through, it's quite the opposite. Since each stage is exactly the size of the iPhone's screen, they take no longer than a few seconds to get through. Each cluster of levels revolves around its own mechanic, such as using springboards, avoiding retractable spikes, and clinging to walls.

Once a player gets the hang of timing the jumps, it's possible to fly through a huge chunk of levels in the blink of an eye, and it's to 5th Cell's credit that each section feels fresh and interesting. (A big plus is that they're over before they have time to get old.)

The only downside to the game is that the "Extreme" levels must be completed in order to get the real ending, and a few of them seem impossible for a human to complete. In stages like 5-E1, 5-E5 and 17-E2, the windows of opportunity between obstacles require the player to nail sweet spots that last 1/10 of a second, or even less. I don't see how the developers expect anyone to get past these levels without using one of the "level skip" items (oh-so-conveniently available as in-app purchases) and it was disappointing to have such a tiny, engaging game end on such a sour note.