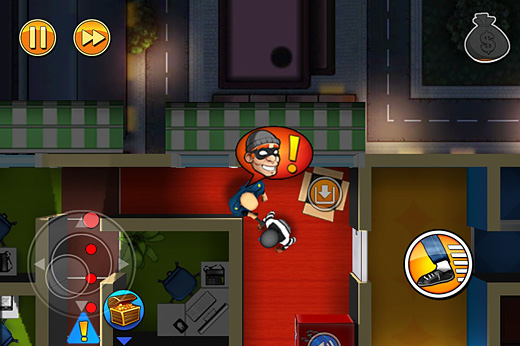 As far as I can tell, stealth games are few and far between on iOS. As a stealth fan, I then had no choice but to check out Robbery Bob: Man of Steal when I stumbled across it. The premise is no surprise, going by the title. The player takes on the role of a sneaky cat burglar named Bob. He wants to go straight after getting released from the local penitentiary, but he keeps falling in with the wrong crowd and being forced to commit more thefts.

The story is nothing of significance, just a cursory set-up for the action. Each level is a house, office, or building of some sort, and displayed from a top-down perspective. When Bob is walking, he's totally silent and can easily sneak past the people he encounters who are patrolling or guarding the path between Bob and his goal. Along the way there are several items to pilfer which add towards a cumulative dollar value. Bonuses are awarded for this, as well as for completing a level undetected, and for a fast completion time.

I started off liking the game quite a bit despite not being too fond of the art style, but as the difficulty increased, my appreciation dropped. My biggest complaint is that the controls feel a little sticky—it's too easy to get Bob stuck on a corner, or he'll sometimes flatten himself up against a wall when I mean to rush through a door. About halfway through the campaign, certain levels require split-second timing, and I don't think that the controls are satisfactory in such situations. Additionally, it's sometimes not clear when Bob will be hidden and when he won't. There were several times when I was sure I was out of sight, yet a nearby guard made a beeline for me and required a restart.

It's a great idea and proves the case that there is potential for stealth play on the iPhone, but Robbery Bob doesn't feel like it's quite there yet. Still, it's fairly interesting and there isn't much like it on iOS. It sort of wins the genre by default. 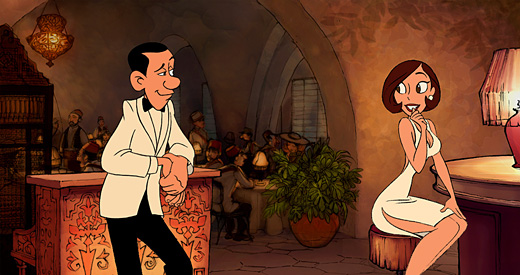 Apparently there's quite a history to The Act. From what I understand, it originated as an arcade game similar to Dragon's Lair, and was intended to be a quarter muncher. It ran into trouble along the way and vanished for a while, only to resurface on iOS. I fully admit that I had never heard of it before a friend had told me it was on the iPhone, but I'm definitely glad that it overcame its tribulations to finally see a release.

The best way to describe The Act is that instead of traditional 2D or 3D design, the game is comprised of incredibly smooth hand-drawn animation on par with something you'd see on television, or in feature films. Everything is fluid, expressive, and bursting with energy and emotion. To control what happens on-screen, the player simply slides their finger to the left or right. This sliding motion's purpose changes from scene to scene, but essentially going one way means "less" of a certain action, and going the other means "more."

As an example, in the game's unforgettable first scene, the player is trying to lure a shy woman onto a dance floor. By keeping the slider leftward, the character barely moves and she pays him no notice. Push the slider all the way to the right, and he becomes a groin-thrusting animal, scaring her away. The animation is so good, I often failed a scene on purpose just to see what sort of crazy thing would happen.

Although it can be somewhat lacking in player feedback at times (Should I be more bold? Less? I can't tell if this is working…) The Act is utterly charming and beautiful to behold. Any fans of hand-drawn animation should download it immediately. 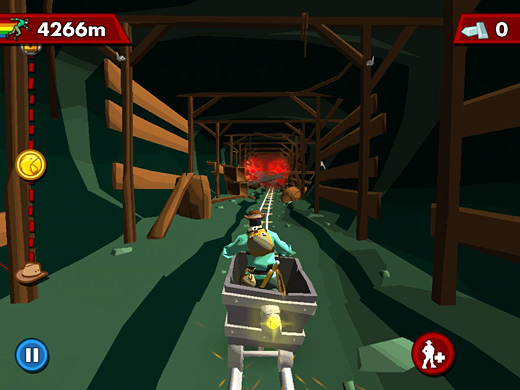 It should be seen as an honor to Temple Run that so many games on the iOS platform have copied it. Personally, I've seen at least four or five clones, and I haven't even been looking very hard. Pitfall! is one more to be added to the list, although in this case, it's a copycat that's worth checking out. Well, it would be if not for the in-app purchases…

Taking the same basic formula of "run really fast, as far as you can" and tweaking it just a bit, Pitfall! has the player running away from an erupting volcano. Where it diverges from the source material is that the camera sometimes pans in different directions, giving the game multiple viewpoints which spice things up more than one would think. Adding to this variety is the fact that the player will run through different environments. Things start off in the jungle, but there are caves, villages, a mine cart, and more. The art style is vaguely cartoonish and stylized, giving it its own personality and flavor, as well.

Although it doesn't really tweak the Temple Run formula that significantly, it is appealing and the gameplay is solid. However, I think that the developers got ridiculously greedy when it came to the in-app purchases that I mentioned above.

From what I can tell, the game has an actual endpoint to be reached. However, it's an astronomical distance from the starting line, so there are multiple checkpoints along the way that can be restarted from if the player has a continue. These continues are awarded the first time a player reaches a checkpoint, but never again after. More continues can be purchased with diamonds (the upper tier of the two-tier monetary system) but they're so scarce and the continues run out so fast, it's unrealistic to think that anyone would have a chance of finishing the game without pumping a sick amount of money into it.

It's heartbreaking to see such a solid game corrupted by outright greed, but there it is. It's still worth it to see what it brings to the genre, but don't expect to finish it without significant financial investment. 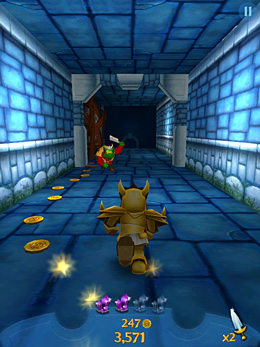 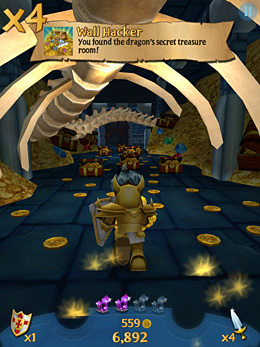 In this game, the player takes control of a squat, cartoonish knight who runs through a castle laden with creatures, traps and treasure. The camera is set directly behind the knight, so the graphics clip along smoothly to provide a good sense of speed. The basic structure will be instantly familiar to anyone who's spent a few hours on an iPhone, but what makes this game stand out to me is the variety and depth on display.

In addition to jumping over pits and sliding under obstacles, the knight equips swords to defeat enemies and shields to deflect traps and bash through crumbling walls—walls which often hold treasure and secrets behind them. There are also a magic gems to collect for invincible speed boosts, and roast turkey legs to grab which trigger a berserker mode, enabling the knight to power his way through anything. Factor in a wide variety of pitfalls, room configurations and dangers to be avoided, and the game manages to feel more varied and interesting than many in the same genre.

If there were any complaints to be lodged against One Epic Knight, they are few. Technically, I think it's a little harder to see pits that it should be. Most of the castle is rendered in various shades of blue, and gaps in the floor sometimes blend into the environment more than they should. In terms of taste, I'm not a huge fan of the google-eyed art style, although it's easy to overlook when the armored hero is chugging along at top speed.

I'm definitely a fan of the autorun genre, and out of all the ones I've played, I feel pretty comfortable in saying that this one is the best I've tried. Toss in the fact that the in-app option to purchase currency comes off as a nice option to have rather than something that's necessary to fully enjoy the game, and One Epic Knight is a can't-miss no-brainer. Great stuff.