Welcome to the first installment of a brand-new semi-regular feature here at GameCritics.com: TouchTalk. 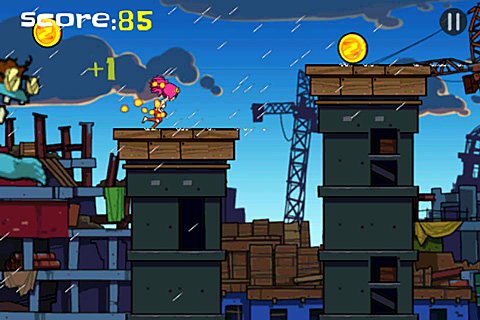 Although zombies have been a bit overused lately, I think there's still plenty of room for games use them in creative ways.  One of the most recent is Zombie Parkour Runner, which puts the player in control of a super-cool urban athlete who radiates can-do girl power. There's a bit of a story to be pieced together by collecting objects which can be viewed inside her room (accessed through the main menu) but the real draw here is the fast-paced platforming.

The developers have done a great job of giving the main character a satisfying amount of moves like wall-running, vaulting, and grabbing onto pipes, yet it's all controlled by a single fingertip pushing on the screen. She runs at a constant pace, so it's up to the player to tap at the right time and get her from point A to point B while an undead giant is chasing her through a city.

The first three worlds are fairly tame, but the fourth world (available via IAP) gets pretty intense and will likely have even experienced players trying certain sections over and over again just to make it to the end. Collecting all of the story items is even more challenging. It looks good, controls great, and offers a solid play formula that doesn't rely on typical zombie fare to keep interest high. 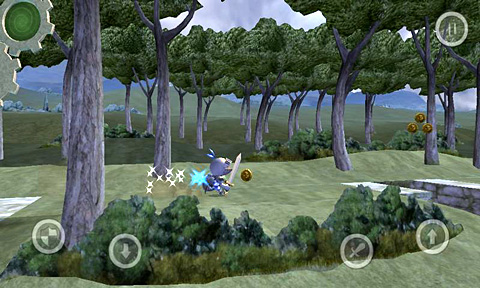 While I generally hate iPhone games that attempt to do fast-paced platforming thanks to the lack of a real controller, I've been fortunate enough to find two back-to-back which pull it off handily. You just read about the first one, and the second is every bit as good, if not better—Wind-Up Knight.

Quite similar to Zombie Parkour Runner, the player is asked to traverse levels while the character moves at a constant pace. Running forward at a speedy clip, the titular knight can double-jump, attack, roll under things, and use a shield to defend from falling objects. The formula seems quite simple at first, but having strong hand-eye coordination is the key to getting through the entire game. Before credits roll, the player will have to be able to instinctively use all of the Knight's moves in rapid succession and with pinpoint accuracy.

Wind-Up Knight is a class act from start to finish thanks to appealing art design, strong production values, and simplified controls which are exactly as responsive as they need to be. Sweetening the deal is a variety of weapons and armor which have significant effects on the game's difficulty. For example, equipping the Medusa Shield means most enemies can be safely ignored, while the Hare Armor makes the game run even faster for those who want a true challenge. It's smart design that acts as a way for players to tailor the experience to their liking.

This game is a perfect blend of well-rounded, bite-sized action that can be picked up and put down comfortably, yet was challenging enough to make me late for work while I had to try just one more level. If there had been a few bosses and a bit more story, it would a close-to-perfect iPhone game. 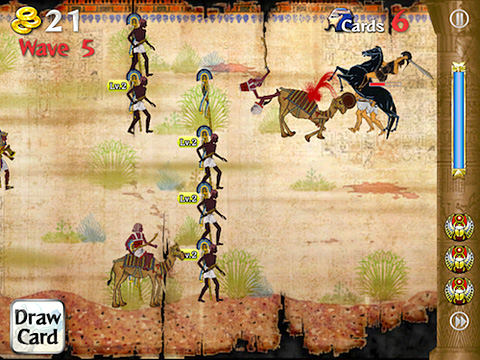 If you took the basic structure of Plants vs Zombies, added come collectible card game elements, and replaced the greenery with Egyptians and the undead with Greeks, you'd have Alexandria Bloodshow. It may sound a little crazy, but it really works.

The game takes place on a small grid, and the player chooses character cards to make up their deck. The starting selections are pretty basic (slave soldier, archer, healer) but each side has more exotic units with more interesting effects that are gained over time. The Egyptian side offers things like Camel Riders, Boxers, and several of the gods that will be well-known to those familiar with the subject matter.

Cards can be placed on the grid according to the player's preference, with the goal of trying to hold back the encroaching enemy army.

The artwork is great (each army is rendered in the 2D style typical of its culture) and the game strikes a good balance between being complex enough to allow for some real strategizing and being simple enough to play on the go and in quick sessions.

It's not perfect, though. Since it uses a CCG-like structure, Bloodshow is very slow to start since the player begins with a very limited number of cards. One new card is awarded per match, but this drip-feed slows the ability to adjust tactics down to a glacial pace.

Naturally, the player has the option to buy more cards with real-life money, but the cost is quite steep—$2 for 3 random cards is the cheapest option. I would have preferred some sort of in-game currency in addition to real-world purchasing to give the player more freedom in picking and choosing cards. It was especially disappointing to see that there's no mechanism to trade in excess cards for new ones.

It might not be everyone's cup of tea and it's got a few issues, but despite all that,  it's still a hell of a lot of fun and it scratches my strategy itch quite nicely. Plus, it's pretty cool to be able to summon wave after wave of mummies and send them shambling towards oncoming troops. Watch out for areas with "fog of war" though… playing levels where it's impossible to see anything on the field is pretty wretched. 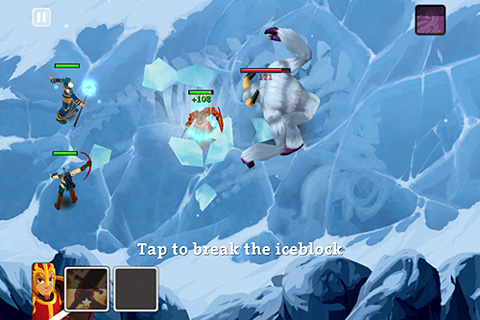 One thing I find really exciting about the app store is that I never really know what I'm going to find. Even within the same genre of games, the variety is quite robust. Case in point, Raid Leader.

The game puts players in control of a three-person party consisting of a fighter, a mage, and the archer. Nothing too shocking there, but what makes the game stand out is that the entire adventure is comprised only of boss fights that play out like real-time strategy.

Each encounter takes place on a single screen, and it's up to the player to maneuver all three of their characters at the same time (no pausing to think) while also making sure that they are properly aimed and doing what they need to do, whether that's attacking, healing, or using a special ability.

It's a very simple formula but it becomes quite a challenge to manage all of those factors at the same time, not to mention that on the Normal difficulty, the game presents some very tough enemies to overcome.

In its current form, it seems like more of a test case than a fully finished product since many of the bosses are repeats and the special abilities earned don't share common levels of functionality. The graphics are nothing to write home about, either. However, taking those things into account, Raid Leader still offers a unique experience and presents some ideas that I would love to see expanded on in the future.