While this series was inspired by one of my old features, the Bargain Basement, I've got an all-new focus for an all-new phase in gaming. Instead of highlighting discounted gems in the used section of a retail shop, I'll be reviewing downloadable mobile games and apps that you might want to check out… and maybe some that you'll want to avoid. 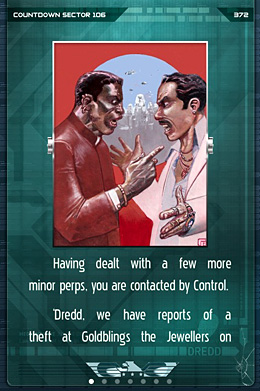 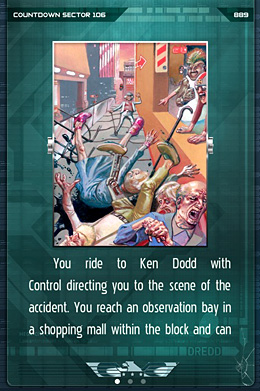 As I write this segment, I am sadly aware that most of the reading audience is probably too young to remember either Judge Dredd or the Choose Your Own Adventure books. This makes me a bit depressed, but at the same time, it's exciting to be able to introduce them to an all-new audience in an all-new format. (And really, I'm not that old.)

Developer Tinman Games has produced a series of "Gamebook Adventures," and Judge Dredd is their latest. Based on the hyper-violent comic book lawman of the same name, this title is basically a book that the player reads, complete with bookmarks and turning pages. The hook is that after each passage, the player is presented with a few choices. Want to kick in the perp's door? Turn to page 349. Want to abseil through the window outside? Turn to page 996.

When enemies are encountered throughout the course of the story, Judge Dredd take advantage of its electronic medium by offering virtual dice rolls to resolve combat. Whether shooting a trio of drug dealers in the face at the same time, or rolling to avoid the attacks of a feathered dinosaur, everything is handled quickly, efficiently, and with a modicum of chance. It's a bit like combining a tabletop role-playing game (RPG) with the iPhone, and it works brilliantly.

The story is action-packed like the subject material, it sports excellent production values including plentiful hand-drawn illustrations and an elegant user interface, and a variety of different paths ensure that the player will be able to go through it several times without seeing the same scenarios. Gamers who can't stand reading should probably stay away, but for everyone else, Judge Dredd is great stuff. 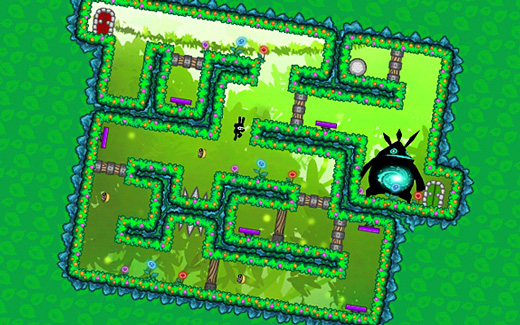 Although I'm relatively new to the games found in the app store, I can definitely say that I haven't found another title which made me manhandle my iPhone quite as much as Grabbity did.

Coming from Efecto Studios (comprised of both Mexican and Colombian developers) Grabbity stars a cute little quasi-rabbit character who must make its way through a series of winding levels, avoiding spikes and collecting coins along the way. The hook here is that the iPhone (or iPad) must be held in a vertical position, and rotated to get the character to move. The rabbit can jump over small gaps and can grasp onto the walls of each level to remain in place while the world is being rotated. Some areas are so twisty that it's almost as if the iPhone was a steering wheel, and the game was asking players to drive for their lives.

The aesthetics are pleasing and the game's concept is a good one. That said, the physics feel a bit off to me. It takes the rabbit a little too long to build up momentum, and once he's going, there's a fine line between moving quickly and being out of control. It's enjoyable for the most part, but there were a couple of tricky spots that tested my patience.

Players should be aware that the first batch of twenty levels are free and function as a demo. It's over pretty quickly though, and the remaining areas of the game are split into two in-app purchases at .99 each. 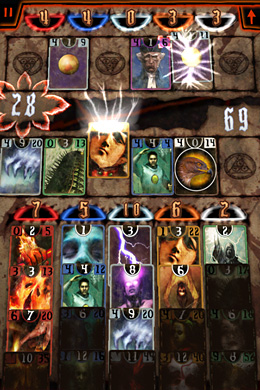 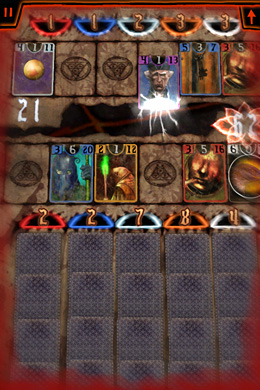 I've been raving about this one for a while now, so I won't keep tooting that same horn for too long. That said, there might be a few readers out there who haven't yet heard me mention this title, so it's worth bringing up one last time.

Kard Combat is a slim, trim collectible card game (CCG) hybrid that offers both solo and online play. It's a bit like Magic: The Gathering in a general sense, but it differs in that the number of cards available are quite small, and I say that as a positive. I've heard many people say that it's a little intimidating to get into games of this type because there are usually a ton of cards and just as many rules to memorize. That's not the case here.

The UI in Kard Combat is absolutely brilliant, and makes the game a joy to play. The iPhone's relatively small landscape is used effectively to display the playing field, the cards, and all relevant information in a clear, concise fashion. What makes the game so playable on top of all this, is that when selecting a card, its abilities and how it interacts with other cards is displayed on the screen every single time. There's never a need to squint, and there's really nothing to remember since everything a player needs to know pops up when they need to know it.

I'm a big fan of the darkly emotive art style, and I appreciated the fact that Kard Combat also differs from other CCGs in that it doesn't matter how much money is poured into the game, the playing field remains quite even for everyone. After the initial investment of buying a character in order to save progress when going through the single-player mode, nothing else needs to be bought.

It's easy to learn, it's got a sexy design, and it's entertaining alone and with friends. Without a doubt, this has been one of the best iPhone games I've come across so far. 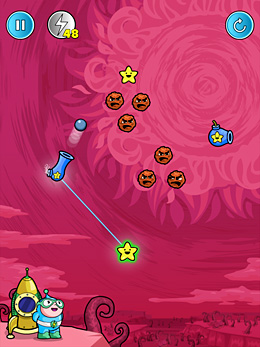 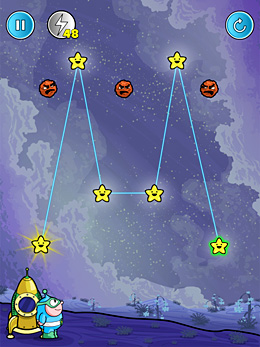 There are endless variations on the small level/three star structure made popular by Angry Birds, and I've come across many that don't warrant a second look. That's not to say that the structure has nothing left to offer, however. Creative developers can certainly put a new spin on things, and that's just what's happened with Space Holiday.

Rather than shooting disgruntled fowl at snickering pigs, Space Holiday has players drawing lines to connecting stars in the sky—a celestial connect-the-dots, as it were. It's a simple enough idea (and that's a good thing) but some nice complexity is added by the addition of asteroids which must not be present within the shapes that are created.

It's an easy task at first to make lines around them at first, but as levels go on, it can sometimes take a little bit of thinking to see how a constellation can be created without having space rocks disrupting the structure. Toss in a variety of stars with special powers (Ninja stars! Literally!) and a number of puzzles where certain elements need some good timing for all the pieces to come together, and the result is a great recipe for killing a few hours on a slow afternoon. The main character is cute as a button, to boot.

If this is what games proudly made in Uruguay are like, then I'm ready for more.