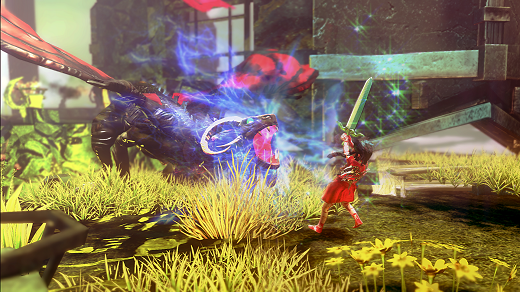 HIGH The color palette is nice.

LOW Getting stuck in a glitched-out respawn area.

WTF How was this deemed ‘ready to publish'?

As a reviewer for the last 15 years or so, I've always taken pride in my ability to avoid getting hung up on bells and whistles, or on how much polish a game has. As long as something has heart and stays focused on what it's trying to do, I can look past a lot when the core of the experience is strong. That said, there's only so much leeway I can give.

Toren is the first project from a small studio based out of Brazil. South America is a region relatively unfamiliar to me in terms of games development, so I was looking forward to what this team came up with. Unfortunately, even with scaled-back expectations and a lot of slack given for first-timers, Toren falls well short of where it should be.

On the surface, the game is an Ico-esque adventure about a girl who must climb a tower to defeat a dragon perched at the top, but it's quite surreal and dreamlike, and pretty much everything is tossed at the player without context. It seems like there's a message struggling to be told here, but I've got no clue what it is.

For example, in one scene the main character is an infant, and in the next she's a small girl. Within a few minutes, she's a young woman. Later, she gets turned into a statue and perishes at certain points, but then she's resurrected (or is she?) and keeps climbing the tower. It seems interesting at first glance, but none of it connects. Without properly setting up the events and giving me enough to sink my teeth into, it's just one random scene after another without any impact.

In other instances, the girl will stumble across statues that take her to a different world within the dream. It's not explained what these places are, and once in them, I'm asked to jump some platforms and perform simple tasks in order to get snippets of a story about people I don't know. It doesn't feel like it coheres with the first world, and seems like a tossed-in way of justifying more gamey stuff for the player to do.

It's one thing to be provocatively enigmatic, but in the case of Toren, it feels like the developers don't know what they want to say, nor how to say it. The narrative is in need of much work, and it doesn't accomplish much aside from showcasing vague themes and using Ico as a touchstone.

Technically, the game is a mess. The color palette is nice but the graphics are crude, the controls are sluggish, the fixed-angle camera is difficult to work with, and it runs poorly thanks to constant framerate problems and screen-tearing. I couldn't even finish the game due to my character glitching out and getting frozen in place after a respawn. The PS4 has enough power to run games vastly more complex than this, but Toren just limps along in dire need of a tuneup.

I hate to come down so hard on a team just starting out, but Toren feels like it's too raw in every aspect, even with its status as an indie taken into account. Some of the imagery is striking at times, but it can't save these random ideas thrown together with rudimentary know-how. If it were a first-year student's project, I'd say it had a lot of promise, but as a finished product offered for purchase? No way.

With another year in dev and refinement of story, gameplay, and technical aspects, Toren might blossom into something special. As it stands, it's a work-in-progress sent to market too soon. Rating: 3 out of 10.


Disclosures: This game was obtained via publisher and reviewed on the PS4. Approximately 1.5 hours of play were devoted to the single-player mode, and the game was unable to be completed due to technical problems. There are no multiplayer modes.

Parents: According to the ESRB, this game contains violence and blood. There's really nothing of note here. The violence is the main character limply swinging a sword, and it's never very graphic or gross. Pretty harmless.

Deaf & Hard of Hearing: No problems here. No audio cues are relevant to gameplay and the game's script is relayed via text. Fully accessible.

Huh, yours is the first review of this game I’ve come across that mentioned any technical problems (though those were for the Steam version). Sorry it kept you from finishing it.

I have heard Toren is flawed, but I’d still like to experience it just to see what the developers have to offer. Maybe I’ll wait until it’s on sale.