Too Human? Too Tedious 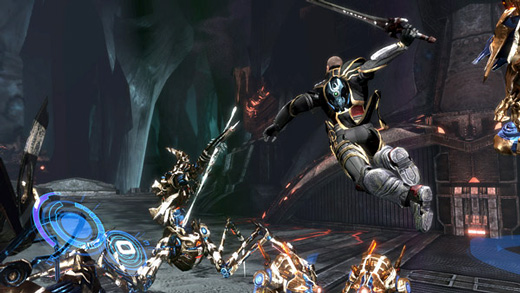 LOW The repetitive, soul-crushing flatness of the gameplay.

WTF Why does each part of the game feel like it doesn't fit with the rest?

If you've ever listened to the GameCritics podcast, you've undoubtedly heard mention of Too Human. It's come up dozens of times thanks to our host's mad affection for it. In fact, it's come up so often that it's almost a running joke. Although I had never played it, my limited knowledge of Too Human was that it was a disaster on a disc, and we never missed an opportunity to crack a joke at its expense. However, in the interest of fairness we eventually decided to put the punchlines aside and really take a good look at it.

My personal verdict? It wasn't nearly the train wreck I expected, but that's not the same thing as saying it was good.

This infamous 2008 release is a third-person dungeon crawler with lofty aspirations of being an epic sci-fi trilogy thanks to a foundation of Norse myths repurposed to fit a cleverly futuristic mold.  Quite a bit of effort was put into fleshing out the conceptual side of things, and if you ask me, this highly imaginative interpretation of ancient legend was by far the best aspect of Too Human.

Although I'm no expert, I have a better-than-passing familiarity with the subject matter. It was quite intriguing to see cyberspace presented as an ethereal Faerie world, trolls and elves become assault robots, and the Midgard serpent recast as a massive assault vehicle. The gods themselves (main character Baldur, Thor, Heimdall, Loki and so on) are no longer supernatural beings, but highly-enhanced cybernetic warriors. They remain "gods" in a sense, but not as they've been traditionally known. This premise is dripping with potential, and the story had no problems keeping my attention.

Also of interest was the way Silicon Knights took a different slant on Too Human's control scheme. Rather than pointing towards an enemy and mashing a button as most dungeon-crawlers do, attacking is mapped to the right stick of the controller. Simply point in the desired direction, and Baldur will launch toward the opponent and unleash a combo. It's unconventional to say the least, but I do think there is merit to this "shorthand" approach—if nothing else, I was grateful for not being required to mash my thumb into paste. There were aspects of this setup I'd like to see tweaked, but I appreciated the attempt at innovation.

So, that was the good. What was bad? Everything else really, but the most damning failure of Too Human is that despite the extremely creative concept, the developers completely, utterly, and totally failed to craft an engaging play experience to match. 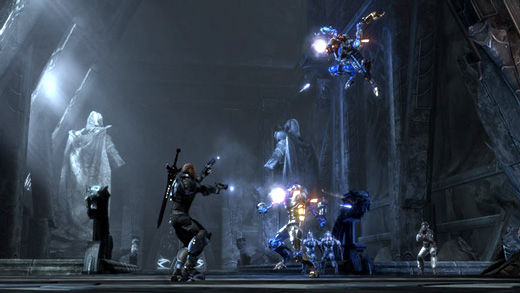 The adventure is divided into four main areas, with each section being little more than a linear hallway that goes on at least three times longer than it should. In fact, trying to clear the game's second area was like some kind of endless death march—after two hours, I was starting to question whether it would ever end.

Puzzles or other non-combat tasks don't seem to exist in this game's world, and interesting architecture or noteworthy features that might have spiced up the environments are extremely few and far between. Making progress is never more complicated than eliminating every enemy in sight, and I often got the feeling that the developers cut and pasted whole sections repeatedly for no other reason than to pad out the playtime—in my book, a cardinal sin.

Making matters worse, there is an extremely small assortment of enemy types—no more than four or five for the first three quarters of the game. Players can look forward to slaughtering (literally) thousands of the same type of robots over and over and over and over and over again, with essentially no variation between encounters. Dungeon crawlers have never been known for the variety in their gameplay, but Too Human takes it to an absurd, almost unbelievable extreme. I simply can't conceive of how gameplay this flat ever got a green light.

With the play reduced to a mind-numbing, sloggy grind between cut-scenes, the only possible hope of gameplay salvation lay with Too Human's loot drops and systems of equipment and skills. Unfortunately, Silicon Knights completely dropped the ball here, as well.

While it's true that pieces of armor and new weapons drop nearly every time an enemy is felled, I found that the frequency actually detracted from the experience. I never became attached to any particular sword or chest plate since I knew I'd find something better in the next few minutes, so the perceived value of items was practically nil. Rather than being excited when awarded a new piece of gear, I simply equipped whatever had the highest stats and pressed on. In fact, I don't even understand why the developers bothered to include a damage/repair system or stat-enhancement for the gear. Players collect such an ungodly amount of equipment that the idea of keeping something long enough to invest in or repair it strikes me as bizarrely out of step with how the drops are implemented.

To be fair, I do want to emphasize that I was enamored with Too Human's premise, and I did find the story interesting enough to see it through to the end. I can't say that about every game I play, so kudos to Silicon Knights for that. However, the game design and underlying systems at the heart of the experience are so disjointed and poorly-implemented that I wouldn't blame anyone for bailing on the game long before it was over. In my estimation, there's about three hours of good, solid dungeon-crawling here—unfortunately, the developers have taken that three hours and stretched it beyond all reason into nine hours of painful, soul-crushing tedium. Rating: 3.5 out of 10.

Disclosures: This game was obtained via retail store and reviewed on the Xbox 360. Approximately 9 hours of play were devoted to the single-player mode, and the game was completed. No time was spent in multiplayer modes.

Parents: According to the ESRB, this game contains blood, language, mild suggestive themes, and violence. While there is comparatively little story in relation to the length of the game itself, the cut-scenes and dialogue are of a very adult nature, and would be quite inappropriate for young children. There are a few scenes of graphic violence, but in general players are attacking robots and not other humans.

Deaf & Hard of Hearing Gamers: You should be aware that while there are no significant auditory cues during gameplay, the subtitles are haphazardly implemented. Even after checking several times to make sure that the option was enabled in the menu, I noticed multiple occasions when dialogue was not captioned on-screen. In a game like this where the only reason to push through is for the sake of the story, such a slapdash effort at subtitling is unacceptable.