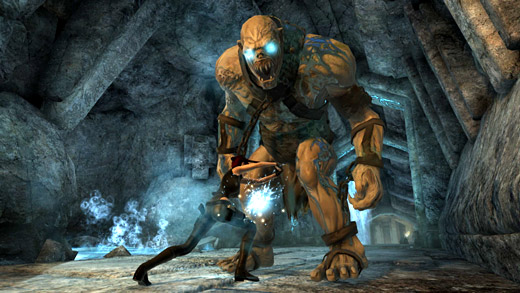 Giving Lara Croft the rare opportunity to sit one out, this expansion puts players in the role of Lara's evil doppelganger; a lethal automaton created by one of Miss Croft's foes. Although resembling Lara physically, there are a number of differences between the two characters, the biggest being that the clone has access to rechargeable "shadow powers" that enable her to play differently than the woman she's modeled after.

For example, when activating this shadow energy, Evil Lara can move at blinding speeds, effectively making enemies and environmental dangers move as though they were in slow motion. Her health also regenerates automatically (no searching for medpacks here) and her physical strength is much greater than a normal woman's. Instead of relying on guns, it's far more effective to attack with devastating punches and kicks. The fact that she's an ace long jumper and scales certain surfaces like a lizard are just icing on the cake.

Although none of these traits fundamentally changes the way Tomb Raider is played, these alterations to the formula are exciting, giving evil Lara's handling a faster, edgier, and more kinetic feel. I don't think anyone would ever accuse Lara Croft of being a wallflower, but Evil Lara is amped up to another level entirely.

The mission itself takes place after the conclusion of the first add-on, Beneath the Ashes, and serves as an epilogue of sorts to the entire game. Without spoiling anything, I can say that one rather large loose end gets neatly tied up. However, as much as I appreciated the closure, the amount of play time delivered by Lara's Shadow is quite brief. All told, I went from start to finish in about an hour and a half, and for the asking price of 800 Microsoft points ($10) that's not a lot of substance. That said, the level design was better than both Ashes and Underworld, and I got more enjoyment out of that brief session than I did with the vast majority of the adventure proper.

To be perfectly honest, Eidos has wildly overpriced the content offered in Lara's Shadow.  I can understand that DLC on consoles is a new territory being explored, but I have a hard time believing that anyone at Eidos could sit through this mission and not think they were taking advantage of their fans. That said, Evil Lara is a dynamic, engaging character, and I would love to see her take a more substantial role in the series's next installment. I definitely like the ideas that Crystal Dynamics are flirting with here, it just seems disingenuous to ask players to pay so much for this small taste. Rating: 6.5 out of 10.

Disclosures: This game was obtained via paid download and reviewed on the Xbox 360. Approximately 1.5 hours of play was devoted to the single-player mode, and the content was completed one time. There are no multiplayer modes.

Parents: This add-on content comes with the same caveats as the main retail portion: it's rated for T for Teens and features violence against humanoid monsters. Although it's not extremely explicit, they do explode into wet-looking chunks. Evil Lara also has guns and can use them, and some of the cut-scenes may be a bit too intense for young ones.

Deaf & Hard of Hearing Gamers should be aware that a quiet "chime" sound plays whenever Evil Lara starts traveling in the correct direction. Without that sound, it can be difficult to tell whether or not the player is heading the right way. Also, some enemies appear behind the player at times, and without being able to hear their growls, you might be open to a few cheap shots. Besides those two concerns, the game is completely playable—although even with the subtitle option turned on, there are brief snatches of dialogue which are not captioned. Consideration of audio accessibility seems haphazard, at best.

Can’t really take credit for the image. Eidos only had 4 images for this DLC and 2 of them weren’t great. That they had a shot of Lara’s low-blowing that dude was smart thinking on their part.