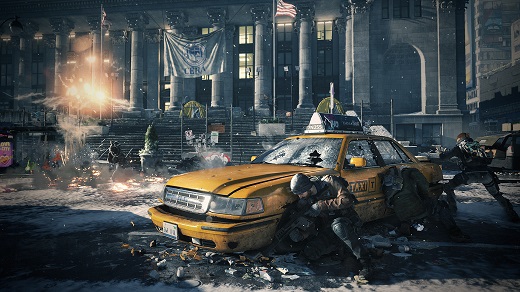 HIGH Getting through a tough mission with a full squad, everyone at their best.

LOW Seeing the same water treatment mission over and over.

WTF No previews of clothing before buying? Come on.

It seems like developers have been wanting to create an MMO in the console space for a while, but doing it successfully is easier said than done. There have been a few good attempts (my favorite was the instantly-ignored Defiance) and several bad ones, but the launch of Destiny was Bungie swooping in to eat everybody's lunch.

I think they were on the right track by taking the basic concept of an MMO and changing it to fit the sensibilities of console players, and it's clearly been a hit. However, as someone who's not a fan of that title, I'd say there's room for someone else to try. Tom Clancy's The Division is Ubisoft's bid, and it's a surprisingly successful, solidly enjoyable experience.

At its core, The Division is a third-person cover-based shooter set in an open world that simulates New York. On top of this familiar foundation are several enriching elements.

The first asks players to level up and earn better gear (or materials to make better gear) by completing missions. Better gear means better odds of surviving tougher zones later in the game. The other element is multiplayer integration. While it's entirely possible to play alone (and huge points awarded for that!) The Division is obviously meant to be played with others in cooperative PVE and cutthroat PVP.

A cursory glance at this formula doesn't reveal anything especially noteworthy, but it's often true that the difference between an average game and an amazing one are in the details. In The Division, Ubisoft has paid a lot of attention to the details.

The most obvious, impressive thing is New York itself. The area is absolutely massive, but I don't celebrate the environment just because it's technically stunning (although it is) but because it's leveraged in a brilliant way—it comes into its own as a great place to be.

Any given area is surprisingly intricate—many structures have fully developed interiors, some offer navigable verticality, there's a network of sewer tunnels, and unique urban scenes are everywhere. Discarded cans, abandoned cars, overturned furniture and other touches make every corner feel like it could be a real place, and there's a shocking amount of environmental storytelling going on.

There are also non-environmental stories happening. Stumbling across any number of unexpected events while on the way to a mission is common, and seeing civilians trying to live amidst the ruin gives welcome flavor. Surprising random thugs breaking into an electronics store is a great way to spice up a jog from Point A to Point B, but even better is seeing the angry apartment-dweller above lean out his window and shout at us about the gunfire.

So New York is a great place to spend time, but being there with friends is even better. Playing missions with two feels different than it does alone, and rolling into a hot zone with a crew of four feels different than two. The difficulty scales upwards in a beautiful way depending on the number of players, and what amounts to a random shootout for one person can become an intense firefight requiring communication and coordination with a group. Considering how tricky it is to get difficulty right in general, it's nearly perfect here.

Oh, and the matchmaking? It's so easy. Glancing at the map instantly shows which friends are playing and where they are. The push of a button joins their group and warps to them. No friends online? Joining with randoms is equally simple and it can be done at any time in several places, so those who don't want to play alone never have to.

The Division also has interesting things to do with players who are not friends.

The middle of New York is called The Dark Zone. It's a discrete optional area where PVP happens. Players venturing in can get great loot, but they have to claim it from super-tough NPCs and then call in a chopper to extract it. Other players would often assist me while extracting their own loot, or they might sometimes ‘go rogue', attack, and steal my goods before the chopper arrived.

The Dark Zone is quite different from any PVP I've played, and not knowing whether someone would help or hinder creates a singular feeling of uncertainty. It's my preference when randoms chip in and everyone works together, but the upside of being betrayed is that respawning and mowing down faux-friendly goons who unloaded their shotguns in my back is immensely satisfying.

Putting these elements together results in the sort of OMG is it really 2AM?!? gameplay that most developers would kill to produce, and the first twenty hours of The Division flew by—cleaning up the streets of New York was great, co-op with friends was even better, and seeing a visible reduction of chaos on my map gave me motivation to keep going. However, it was about this time that some of the weaker areas became a little harder to overlook.

For example, many smaller missions follow a template, and the same six or eight types (rescue the civilians, stop the arms deal, etc.) repeat. While they're not always exactly the same because being set in different environments gives them little twists, a few more types would've been welcome. The large story missions are unique, bombastic runs full of dynamic setpieces, but the smaller stuff needs more variety.

The mission repetition is compounded by The Division's low-key narrative. The general idea is to "take back New York" which makes sense since the player is a member of a special unit on assignment. However, the scripted story beats aren't played up, and the supporting characters aren't memorable.

Interestingly, I found that the collectibles (discarded cell phones, abandoned laptops, and so on) offered surprisingly rich micro-storytelling and I was motivated to collect more than I normally would, but The Division could easily support a stronger core narrative. It's fine to focus on action and playing with a group tends to gloss over plot weaknesses, but it stands out as a big area for improvement when playing alone.

The other thing that needs improvement is the loot. Collecting gear is always a key factor in a game of this type, and I'm happy to see that The Division nails the frequency of drops. There's always a new thing to test out, nothing is rendered unusable by being meant for a different class, and the drops aren't so frequent that they kill the thrill of grabbing a new goodie. It's all finely balanced.

On the other hand, the developers play it too safe with the quality of the loot, especially in regard to visual appearance. The overall aesthetic sticks pretty closely to realism, and I get that this is a Tom Clancy title—the devs don't want players walking around with day-glo afros, oversized bobbleheads or S&M gear. However, playing dress-up and looking cool in front of others has huge value in loot games. Getting a better gun is great, but getting a better one that looks identical to the one I just discarded misses the point. More options and eye appeal are necessities.

While there's no question that The Division has plenty of room to grow, it also gets a surprising amount right. It's a great fit for consoles, solo players are welcome, and it delivers a fantastic multiplayer experience that's easily accessible in co-op and PVP. Accomplishing all that is no small feat, and I'm eager to see how it develops over time—I may not have a flashy outfit and I can't recall the names of the NPCs at home base, but I'm definitely ready to sign up for another tour of duty. Rating: 8.5 out of 10

Disclosures: This game was obtained via publisher and reviewed on the PS4. Approximately 35 hours of play were spent, and the campaign was not completed. (Still playing.) 32 of the review hours were spent in multiplayer modes.

Parents: According to the ESRB, this game contains: blood, intense violence, and strong language. Although the moment-to-moment combat is pretty standard shooting fare, there are certain scenes which are more intense. Some ambient moments show civilians being beaten, some of the audiologs have traumatic moments, and there's plenty of salty language everywhere.

Deaf & Hard of Hearing: The UI is great and provides loads of information on-screen, and this is enhanced with use of certain in-game abilities. Subtitles are available for all dialogue and I did not find audio cues to be necessary for gameplay. I'd say it's fully accessible with the caveat that high-level team play might be difficult without the ability to speak/hear teammates.

Remappable Controls: Certain functions are remappable, but complete remapping is not possible. X/Y axes can be changed, stick sensitivity can be altered and so forth, but in general, there's just one basic control scheme.