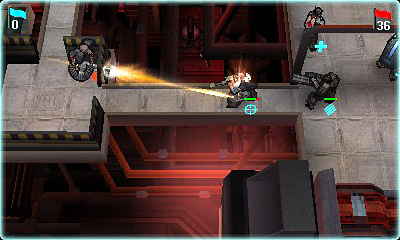 HIGH Knifing four enemies in the same turn for a come-from-behind win.

WTF Why isn’t there a sequel yet?

Full disclosure: I'm not a fan of Tom Clancy, Ghost Recon, or of military-themed games in general. Despite all that, I went into Tom Clancy's Ghost Recon: Shadow Wars after it was recommended by more than a few friends, and I loved it. It might seem strange that I had affection for a Tom Clancy title, but rather than typical shooter fare, Shadow Wars is actually turn-based strategy partially developed by Julian Gollop, one of the creators of the original X-Com. Since I’m a fan of his work and of turn-based strategy, it was easy to look past the franchise’s trappings to enjoy the core game underneath.

In any other review, this is when I might discuss the plot and motivation the game gives players, but I’m going to skip all that. The story is no great shakes thanks to an overarching plot stuffed with tiresome political maneuvering and a mishmash of characters and countries which don't amount to much. There were a few decent dramatic moments here and there, but Shadow Wars wisely limits chatter to a few bits of text between levels and the occasional mid-mission exclamation.

Looking past the narrative, players familiar with turn-based strategy will feel instantly at home with Shadow Wars, and that's not a bad thing. Each member of a player's squad will get a chance to move a certain distance and then act. Actions include attacking with their standard weapon, or doing a secondary ability like healing or tossing a grenade. Once that's done, the next character takes their turn. When all the friendlies have done something, the enemy side performs its actions, and so the game goes until victory or defeat.

While this play structure is typical for the genre, what makes Shadow Wars stand out are the individual soldiers. Rather than the player constructing a squad from faceless unit types, each member of the six-man team is a unique person with their own skills, equipment, and abilities. 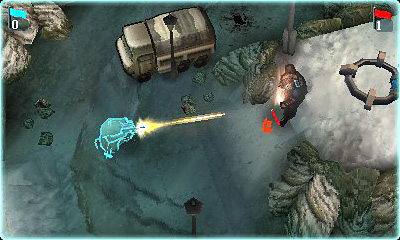 I'm a huge fan of the "everyone’s a defined character" approach when it comes to strat games, and it's done well here. My personal favorite was Banshee, a red-headed soldier equipped with a stealth cloak and a combat knife. With careful maneuvering, she was often able to take out entire squads of enemies by herself. I also became quite attached to Mint, a rookie engineer who can deploy turret guns and remote-controlled drones. Shadow Wars often used him as the key to crucial missions, and once he’s buffed his gear, having a robo-helper for an extra squadmate is a great perk.

Speaking of perks, Shadow Wars offers a surprising number for each character. Although the player does not have access to a traditional skill tree (every previous upgrade must be purchased before the next becomes available) it is possible to alter the team’s loadout before missions. Although more depth would have been appreciated, I still enjoyed being able to switch weapons and armor around to better suit my playstyle.

These things were all solid, but the part of Shadow Wars that won me over was one of the most crucial aspects of any strategy game—variety in missions. Although it feels small in scope (it was originally developed for the DS, apparently?) the developers have managed to include a wide range of terrain, situations and objectives. Rather than simply asking the player to defeat all enemies" time after time, things like rescuing captives, planting explosives, disarming nukes, protecting resistance fighters, and more will pop up over the course of the campaign. Some of these are simply minor variations on a common concept, but they did serve to keep each mission feeling fresh and interesting.

My time with Shadow Wars was overwhelmingly positive, but if there’s an Achilles heel here, it’s that the visual side of things is as unappealing as canned dog food. In fact, it's so rough-looking that I was actually a bit shocked when I began. I'm glad I stuck with it past the homely aesthetics since it’s so sweet and juicy where it counts, but yeesh… Those graphics.

Although I never would have expected it from a Tom Clancy title, Tom Clancy's Ghost Recon: Shadow Wars was a great title from start to finish. I enjoyed the characters, I enjoyed the strategy, there’s a ludicrous amount of content, and there's even pass-the-handheld multiplayer for those into that sort of thing. Apart from the less-than-sizzling looks, this one’s a must-have for any turn-based strat fan with a 3DS. Well done, Ubisoft Sofia. Rating: 8.5 out of 10.


Disclosures: This game was obtained via retail and reviewed on the 3DS. Approximately 28 hours of play were devoted to the single-player mode, and the game was completed. No time was spent in multiplayer mode.

Parents: According to the ESRB, this game contains mild violence. Although the graphics aren't very detailed, the game is all about shooting enemy soldiers (or knifing them, as the case may be). Fallen enemies disappear in a puff, so there are never any bloody explosions or lifeless corpses littering the battlefield, but the overall tone of the game is definitely aimed at older players. It's certainly appropriate for teenagers, but personally, I don't think I would let my young ones play this.

Deaf & Hard of Hearing: I played the game almost entirely without sound, and encountered no problems. Dialogue is delivered through text, and the turn-based nature of play means that there are no audio cues necessary for success. It's totally accessible.