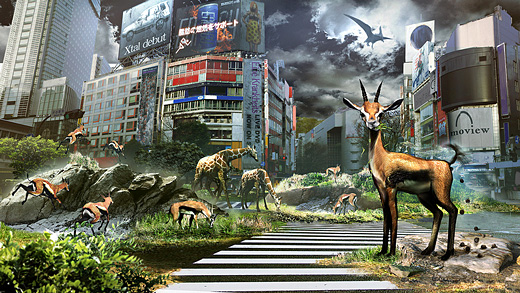 WTF Why are there no omnivores?

As an old-school gamer, I have no shame in saying that I love physical media. I like having something that I can display and share with friends. I especially like actually owning something, and being able to play it whether the Internet is working or not.

On the other hand, I love experimental titles, and publishers aren't putting them on shelves anymore. As much as I hate that something I've "bought" might go POOF thanks to a busted server or a company going out of business, if the trade-off of that is greater access to niche games that wouldn't otherwise be available… well, I guess that's all right with me.

Case in point? Tokyo Jungle. Without a doubt, there's no way this game would have made it stateside if not as a lower-risk, lower-priced download. I may not have a disc to hang on to, but I'm willing to forgive since I'm thrilled that it was released here at all.

While the trailers for Tokyo Jungle feature wildlife running amok in a people-free city, that's not really what it's about. It certainly looks like typical Japanese game insanity at first glance, but gamers expecting nonstop mayhem might be disappointed—there's actually a deliberate and orderly substructure to the proceedings. It's not immediately apparent, but it's there.

The game is split into two modes: Story and Survival.

Story is a sequence of 14 bite-sized missions unlocked in Survival mode, and each one is tailored towards a certain animal. The goals are simple (sneak here, kill this thing there) but the wacky factor is high. The first section is about a Pomeranian learning to survive in the wild, and eventually moving into his own apartment. The next section has a young deer doing a fantastic impression of Metal Gear Solid's cardboard box sneaking, and the one after is a multi-part revenge tale. Don't take any of it too seriously, because the developers don't. Not until the end, at least.

While these little vignettes are entertaining, they're just a small part of Tokyo Jungle. The majority of playtime is focused on Survival mode, and I suspect this is where it might lose some people.

The overarching goal of Survival mode is for the player to keep their chosen species alive for as long as possible, and there are a variety of random factors that conspire to end the player's run. Unexpected food shortages, sudden toxic clouds, and surprise encounters with powerful predators can all bring a session to an abrupt and permanent halt—and in Tokyo Jungle, there's no save to re-load. If an animal dies, the only option is to start from scratch and try again. 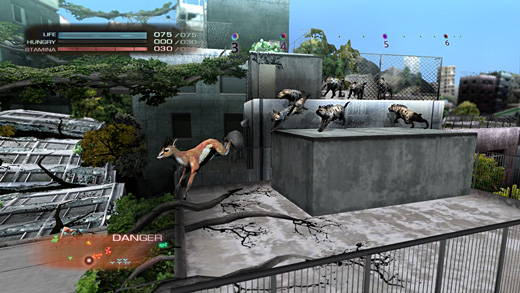 While this initially sounds harsh and repetitive, once the player clicks into the truth that Tokyo Jungle is essentially a hybridized Roguelike (a genre frequently known for its randomness and difficulty) then the game's overall methodology starts making sense, and can be swayed to the player's advantage.

Each year of an animal's life lasts for about one minute of real-time. Every species will die at the age of fifteen, so it's imperative to toughen a creature up by eating its chosen prey and completing certain goals. However, the catch is that species which are available early won't be fierce or durable enough to last long in this brave new world, especially once bigger and deadlier species start appearing. Smacking down beagles isn't hard. Besting a pride of lions? Not so easy.

Instead of trying to go the distance right out of the gate, Tokyo Jungle wants players to take a "big picture" view and think of themselves not as any one given animal, but more as a spirit of evolution overseeing this new urban ecology.

By increasing stats and passing those traits on via breeding, the player should be able to defeat a "boss" animal higher up on the food chain within a few generations. Once that's done, that creature is unlocked for use. These newly-available animals have higher beginning stats, which means that they are in a perfect position to work towards the next "boss." This cycle continues until the player reaches a species which is hardy and vicious enough to endure anything that the game can throw at them.

By understanding this long-form, relay race structure, Tokyo Jungle is revealed to be much more than a simple action game pitting animals against each other in absurd match-ups. Instead, it becomes a frenetic series of objectives to meet and timelines to beat with the ultimate goal of strengthening offspring and fighting for the future.

I'm sure that this sort of formula won't be to everyone's liking, but I found myself addicted to it almost immediately. Rather than playing it just for the kangaroo-on-crocodile action, Tokyo Jungle became about how quickly I could get any given species to maxed-out status, which territory would be the best to transition into the next generation, and how easily I could navigate the city to satisfy whatever challenges popped up. It also became about knowing when to attack (or flee) a creature larger than myself, about finding "prime" partners to mate with, and judicious management of rare items in order to safeguard against unexpected hardships.

Tokyo Jungle is exactly the sort of unconventional project that I live for, so it's easy to forgive its issues; the low-end production values, two extremely ill-conceived stealth missions that don't suit the mechanics, and a few boss fights that were more frustrating than fun. Although irritating, none were dealbreakers—just be prepared to restart a few missions here and there.

I can easily imagine some people getting hung up on the fact that this project isn't an easy-to-categorize AAA title, but we get more than enough of that stuff as it is, if you ask me. Unique little affairs like Tokyo Jungle? I'll embrace any amount of roughness for a game that brings heart, originality, and playable dinosaurs to the table. Rating: 8.0 out of 10.


Disclosures: This game was obtained via publisher and reviewed on the PS3. Approximately 18 hours of play were devoted to the single-player mode, and the game was completed. No time was spent in multiplayer modes.

Parents: According to the ESRB this game contains suggestive themes, violence, blood, crude humor. Long story short, this game is solely about animals attacking and eating other animals. Although I didn't think it was very graphic, there is some blood and it's clear that animals are getting bitten, killed, and eaten. Personally, I let my kids watch it and used it as an instructional lesson in the circle of life, but your mileage may vary. One final note, players will have to mate as part of the core gameplay. It's a fade-to-black scene that shows no detail except for one animal briefly mounting another, but be aware that it's in there.

Deaf & Hard of Hearing Gamers: I played the game with the sound off for a few sessions, and never encountered any problems. The on-screen minimap clearly shows all relevant environmental information, and all dialogue is delivered via text. As far as I could see, it's totally accessible.

Why aren’t the Japanese making more games like this and just releasing them on PSN, XBLA or eShop?

These are like the old weird Japanese games I grew up on. Anyone remember games like Tail of the Sun, Space Station Silicon Valley (made by Brits) and Animal Leader? These seemed to always be coming to game consoles. If it is more of a risk to release these games then please please please go the digital download route.