Love the sizzle, but it needs more steak 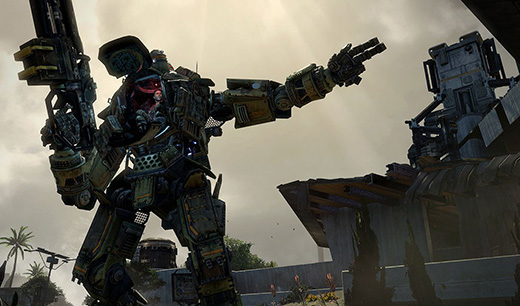 LOW The frequency of getting killed going toe-to-toe with other Pilots.

WTF Is everybody playing this on speed, or am I just that slow? Oh.

Full disclosure: I'm not someone who spends a lot of time on multiplayer shooters, and I don't derive a lot of enjoyment from the genre in general. On the other hand, I'm a huge fan of big robots, and that's something Titanfall

has in spades.  If not for the metal machines I don't think I would've given it a second glance, but my mecha-curiosity was piqued, and after having spent some time with it, I'm glad that I gave it a spin.

Being an atypical player, what made it engaging (besides the robots, of course) is that someone who's not a pro at these can do other things besides straight-up PVP—something I'm terrible at. Rather than repeatedly offering myself up as headshot fodder, I liked being useful by cleaning up the AI grunts and drones, and even better, by specializing in going ‘rodeo'. Hiding around corners to leap on top of passing Titans and then unloading ammo into their sensitive circuits was a great thrill.

Actually using the Titans instead of destroying them was good too, although not quite the power rush that one might expect. While the guns are stronger and the machines take more damage than the Pilots on foot can, the lack of jumping ability is a handicap and they often become big targets for everyone on the battlefield. Without great teamwork in a squad, being inside the armor often seems more dangerous than being outside. On the other hand, the developers have included secondary functions for the Titans—they can either follow the player and act as a mobile gun platform, or they can "guard" one spot. It's a smart move to let the beasts serve a purpose if the player doesn't want to take the controls.

From a technical perspective, I was surprisingly satisfied with the 360 port Titanfall has received. Although I don't have an Xbox One and didn't do a side-by-side comparison, the graphics are great and it ran at a very acceptable clip. And no point did I ever think "I really want to see this on the better machine". For people (like me) who haven't invested in Microsoft's bigger box, this is a pretty fantastic translation, and I was happy with it. Bluepoint games clearly knows what they're doing.

While the basics of what Titanfall delivers are rock-solid, some aspects of the experience don't feel like they're quite there yet. For example, one of the big selling points of being on foot is that Pilots have agility that includes wall-running and double jumping. However, some maps are better suited for this than others, and since the game doesn't pull back into a third-person viewpoint to give better spatial awareness for the jumping, I often made errors when gauging distances and heights, frequently failing to perform maneuvers I was trying.

The included ‘campaign' mode is a half-hearted effort, with a lot of dialogue running in the background burbling names of places and people that don't mean a lot. Essentially, it's just some noise happening while the standard modes are being played, and it feels like an enormous missed opportunity. I was also surprised to find that the game is incapable of running offline, with no bots for single players. That seems like an obvious omission, considering that the game already populates maps with so many AI characters as it is.

With those criticisms in mind, I'm going to be ‘That Guy' and say that Titanfall feels like just the beginning of an IP that could easily become a bigger, deeper, and more satisfying game. The idea of having a squad and being able to call a hulking mech in for backup at any time is fantastic, and I could easily imagine an open-world game with a stronger story, better objectives, and a more traditional campaign on top of the multiplayer. I would be absolutely on-board for something like that, and if the devs threw in more customization for both the characters and the Titans, they would probably be able to count on me as a fan for life.

than I expected to, and as someone who doesn't play multiplayer shooters, that's a real compliment. On the other hand, I don't see myself putting any more time into it, and I can't help but hope that the developers shoot for something a little more traditional next time. The multiplayer's locked in, but there's an incredible potential for more. Rating: 7 out of 10.

Parents: According to the ESRB, this game contains blood and gore, strong language and violence. To be honest, though, it's pretty tame on the violence and swearing front. An odd neck snap here or there, or a pilot bursting into a splash of blood that disappears in a nanosecond is about as vicious as it gets.

Deaf & Hard of Hearing: Subtitles are available for use during play, but a game like Titanfall relies heavily on being able to hear what's going on around the player. A minimap does aid in locating unseen enemies, though without audio cues the player will certainly still be at a disadvantage. Also, there are no subtitles provided for the voiceovers between missions.