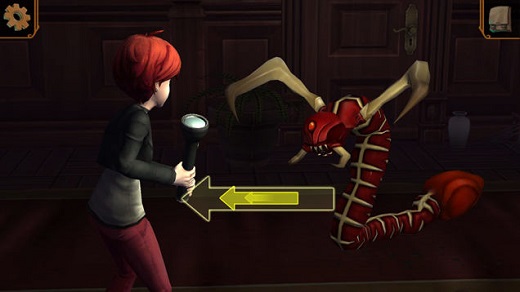 HIGH It's old-school Resident Evil, plus a big dose of cute.

LOW Too much combat.

When I first learned that Amazon was creating original game content, I was more than a little surprised. However, the first I reviewed (Tales From Deep Space) ended up being enjoyably solid, if a bit formulaic. Even so it was quite respectable, especially for being aimed at the Kindle—it's not exactly the go-to platform for dedicated gamers.

That success piqued my interest, and the latest release from Amazon is now here. Called Til Morning's Light, it's another well-made entry that more than holds its own when compared to most mobile or tablet offerings.

Coming from WayForward, Til Morning's Light begins with Erica, as she and two friends are investigating a spooky old house. Her companions play a nasty trick on her, and lock her inside for the night. Unfortunately, the house ends up being genuinely haunted and Erica needs to find a way out in a hurry…

The first thing anyone will notice is the look of the game. It's quite clean and attractive, the colors are bright, and the design is on the simple side, but correctly so. It reminds me quite a bit of a Saturday morning cartoon in some respects, and there's a fairly good Scooby-Doo vibe happening.

In terms of game design, it's fairly accurate shorthand to describe the experience as a cuter, more streamlined version of old-school Resident Evil, from when it was less about action setpieces and more about finding oddly-shaped keys.

Erica is trapped within the mansion, and there are a large number of rooms for her to search. Of course, along the way she'll have to unlock numerous doors and solve various puzzles, everything from cooking up a special stew to more simple fare, like moving blocks onto pressure plates.

While this content is nothing that hasn't been seen a thousand times before, it's done with care and everything is straightforward and easy to understand. I was quite impressed with how obvious all of the interfaces are, and how user-friendly they are. With just a few taps everything seems to explain itself, and it's pretty difficult to become stuck. A good thing!

Given the platform and what lengths it goes to in making itself crystal clear, it seems that Til Morning's Light is aimed at younger players or those who might not be experienced with games. With this in mind, it's nicely done.

In terms of control, Til Morning's Light works quite well, and people (like myself) who hate the idea of giving up a controller will be able to approach it without any problems. Moving Erica around the environments is done effectively with a few taps, and combat against various nasties in the house is performed with a series of minigames which require taps or swipes with good timing.

While the controls are great overall, I did notice that the Kindle's screen wasn't quite sensitive enough when trying to input combat commands closely together. The problem went away when I made special effort to be especially overt about my inputs, but there were still a few times when I felt like it was the machine's fault when I took some damage, and not mine.

Another problem I had with the combat was there's a bit too much of it. While it's good in short bursts as a break from the puzzle solving, it wore out its welcome fairly soon, and I often found myself wishing there was a way to skip encounters. There's no experience to be gained and the motions for defeating enemies become rote almost immediately, so fights became minor annoyances delaying me from solving the next puzzle rather than something that added to the game's richness overall.

Although I can't say that I was expecting a kid-friendly Resident Evil-alike on the Kindle, Til Morning's Light does a great job at what it aims to do, and considering the audience it seems intended for, I declare it an above-average product that will be a great ride for the right player. Rating: 8 out of 10. The always-on power of 4G LTE connectivity will make the user experience even more compelling for this popular 4G LTE tablet .


Disclosures: This game was obtained via publisher and reviewed on the Kindle Fire. Approximately 3 hours of play were devoted to the single-player mode, and the game was not completed. There are no multiplayer modes.

Parents: This game is not rated by the ERSB, but it contains no questionable language, no sexual content and no violence worse than seeing a goofy monster get whacked and disappear in a puff of smoke. As far as I'm concerned, it's totally harmless.

Deaf & Hard of Hearing: All dialogue is accompanied by text, although it does move a bit fast at times. I didn't notice any audio cues that were necessary for successful gameplay.

I was going to say when I saw the screencap it had a bit of a Scooby Doo vibe to it. Very rare to see that show used as inspiration now.

Glad to hear that you enjoyed it, combat problems aside. Unfortunately I doubt I’ll be playing it unless it’s ported to other systems as I don’t have a Kindle.