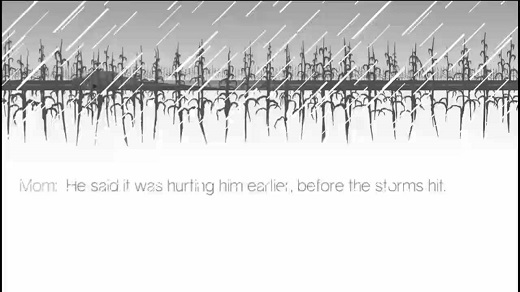 LOW The story didn't have any impact.

WTF Why do I need to hold down R2 the whole time?

I seem to be on a streak of bad luck with indies lately. Although I usually love checking out smaller works from smaller studios, I keep falling into games that must mean a lot more to the developers than they do to me, and these experiences are not winning me over. The latest in this string is Three Fourths Home: Extended Edition.

This bite-sized title isn't really a game, but more like a piece of interactive short fiction. The tale is about a girl named Kelly who's driving through some bad weather on her way back home. As she drives, she's on the phone with the members of her family, discussing various topics.

A phone conversation while driving is an interesting premise and something this far out there isn't the usual fare on PSN. I'm happy to see it offered and I'm all for alternative experiences, but Three Fourths Home never connected with me, and didn't feel like it amounted to much in the end.

Although the conversation feels natural enough, it wasn't interesting in the way that an interactive narrative should be. Rather than something that intrigued or engaged my curiosity, it felt like I was simply overhearing someone else's conversation. I didn't have strong feelings about which way the chat went, and didn't feel like I had any reason why I should.

In terms of the technical production, it's a very small-scale project. When something is a tiny as this, I expect every part of it to be absolutely on point. Unfortunately, Three Fourths Home stumbles a bit.

For some bizarre reason, the developer thought it would be a good idea to require the player to hold down the R2 button during the entirety of play. Ostensibly this is to simulate Kelly's foot on the gas pedal of the car, but all it did was put unneeded stress on my finger without adding anything to the experience. It may sound like a small thing to harp on, but when being asked to hold a button down for thirty minutes straight, it's an issue.

Another irritant was that there's a very slight forced pause before the player can forward the text. Having to wait those few seconds after every line of conversation was maddening… I wanted to read through the story at my own pace, but there's no way to skip the pauses. Again, it sounds like a small thing, but when the entire experience is just reading, it matters.

Since this is the "Extended Edition", it comes with an epilogue chapter that was apparently not available in the original release. In this section, Kelly is at a bus stop waiting for a ride, and she has a conversation with her mother. I was grateful that I didn't need to hold down the R2 button here, but it suffers from the same problems as the first section—it feels like a random bit of conversation coming from someone who I don't have any attachment to.

The main game and epilogue can be completed in about an hour, total, and even though that's a very short period of time when compared to other games, it felt like it went on longer than I wanted it to. Although I liked the minimalist aesthetics and I'm open to interesting little projects like this, Three Fourths Home: Extended Edition didn't feel like it had much of a point. I'm sure that something about this content is very significant to its creator, but the problem is that it wasn't very significant to me. Rating: 4 out of 10


Disclosures: This game was obtained via publisher and reviewed on the PS4. Approximately 1 hour of play was devoted to the single-player mode, and the game was completed. There are no multiplayer modes.

Parents: According to the ESRB, this game contains: suggestive themes, strong language, and alcohol reference. I can't imagine any kids playing this, but even if they did, it's really tame. There's some discussion of the father's alcohol use and nothing else notable that I can recall. The M rating seems like overkill here.

I didn’t mind it; I liked the story well enough but agree it was a bit pointless. I didn’t have any desire to replay it to explore the other responses. Still, it was fine, if a little too heavy on the story within the story which was the brother’s parable. I’d say it’s worth checking out if you like this sort of thing, as it is not expensive and has *some* interesting things going on. If I remember correctly the R2 thing was used to go forward (and conversely backtrack with L2) through the conversation and choose different choices though… Read more »