War is hell? No, it's mostly crafting. 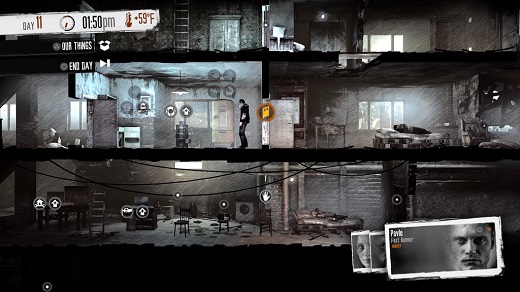 HIGH Stumbling across the elderly couple.

WTF Where's the humanity in this game?

While gamers have a near-infinite number of military power fantasies to choose from, there've been precious few attempts at showing a wartime viewpoint other than looking down the barrel of a gun. Such projects are quite uncommon—just a half-drop in the bucket compared to the vast legions of gruff lone-wolf heroes saving the day.

This War Of Mine: The Little Ones is certainly about conflict, but it's a rare one. Instead of the usual first-person shooting, it puts the player in the shoes of common people trying to survive while chaos rages around them. I'm fascinated by the concept and applaud the effort, but I find it incredibly ironic that for a game which eschews combat in favor of the struggle to live, what it lacks most is humanity.

Things begin with the player controlling three survivors in a huge house. Everything is shown from a side-on 2D perspective, and the player can jump between any character at any time. The game makes no effort in introducing its mechanics, but it soon becomes clear that This War is split right down the middle. One half is all about crafting and resource management, and the other is about scavenging for things in the surrounding areas.

While exploring the house that serves as home base, there are loads of icons scattered throughout multiple floors. Clicking on these experimentally shows that many objects can be cannibalized for parts and components. Once material has been gathered, there are crafting tables that can be used to create objects to aid the survivors in one way or another—beds, stoves, and simple tools at first. Later, more extravagant things like alcohol stills, animal traps, comfortable chairs, gun repair, herb gardens and cigarette-making come into play.

It initially seems interesting, but crafting is the only thing to do during daylight hours. Characters will say a line of dialogue here or there, usually related to their status (healthy, tired, injured, and so on) but I never felt much attachment to them. There aren't any meaningful conversations to have, there isn't any variety to the daytime gameplay.

For example, sometimes people will come to the house and ask for help, meaning that one of the survivors can choose to leave and lend aid. Rather than going to do that thing, the player only gets a quick text recap when they return. The same goes for being raided. Other groups will often ransack home base, but these situations are (again) reduced to text boxes summarizing what the outcome was, rather than letting the player live or fight through it.

When night falls, This War goes into its second mode—the scavenging. Players will choose one member of the household to venture into a nearby building in the hopes of finding more grist for the crafting mill. While this is still done by clicking on icons to search, players will frequently have to sneak around, either to avoid being seen stealing (it makes them feel bad) or to avoid conflict with people guarding what little they have. Ironically, in spite of the supply shortages and other hardships, many NPCs have no problem finding weapons.

While this mode is certainly more involving and immediate, combat usually ended with my character dying thanks to a combination of bringing a knife to a gunfight and the game's clunky controls—it handles fine when going through the crafting menus, but it's unsuitable when trying to double as a real-time action engine.

Scavenging was also frustrating due to frequently running into obstacles that require a shovel or crowbar to get past. Backpack space is limited, and bringing tools means being able to carry less. Inefficient trips mean wasted time and resources, and the more trips that need to be made, the faster food dwindles at home. It's easy to get sucked into a downward spiral.

Making matters worse, the game auto-saves to prevent reloading if the worst happens, so losing a character to injuries or death means that the remaining people at home are about to have some serious problems. The penalties for messing up are steep, and it's a lot of repetitious grunt work to restart and get a new game rolling. After a few dismal failures, I'd had enough.

By this point I'm sure some readers are wondering why I haven't mentioned the children—they're the ‘little ones' in the title and apparently the biggest addition to this version of the game. Unfortunately, I didn't see any during three separate attempts at the adventure. I've heard tell that children get randomly dropped off at the house and require special handling, but I can't speak to it. They just didn't appear in my playthroughs.

While This War Of Mine hooked me with its concept, I quickly became disillusioned and lost interest. Trying to min/max for resource efficiency and doing gathering run after gathering run is just too flat and monotonous. While I get that some of this grind is probably intentional in order to ‘simulate' the hardships of living through wartime, it doesn't make for a compelling experience—the focus is simply on the wrong things. In a game like this, it's a huge problem that I felt nothing for the characters. Rather than fragile survivors with hopes and dreams, I could only see them as mechanical avatars that needed to be fed, rested and healed.

With more variety in the gameplay and a lot more emphasis on the people struggling to live through a horrific situation, This War Of Mine: The Little Ones would be an easy recommendation as an alternative take on war. As it stands, it's a great premise that struggles to deliver a compelling experience thanks to spending far too much time on crafting and not nearly enough on humanity. Rating: 6 out of 10


Disclosures: This game was obtained via publisher and reviewed on the PS4. Approximately 8 hours of play were devoted to the single-player mode, and the game was not completed over three extended attempts. There are no multiplayer modes.

Parents: According to the ESRB, this game contains: violence, blood, use of drugs and alcohol. There's no question this is a game meant for grown-ups. People die, situations are grim, and everything's generally awful. The graphics aren't especially gory, but based on the overall content, I'd steer kids away for sure.

Deaf & Hard of Hearing: All dialogue is accompanied by text and there are no audio cues necessary for play. It's fully accessible.

Controls: The controls are not remappable and do not offer alternate configurations.

Colorblind Modes: No colorblind modes are offered. There is a ‘pencil sketch' visual filter that can be turned on or off. Also, the game is presented in very muted visual tones, nearly black-and-white.

Thanks Brad. I doubt I’ll see myself playing this game since I don’t have much interest in what it’s trying to do and more importantly, what it seems not to be doing. I have watched some of it on YouTube, and read quite a few reviews on the game. No need to answer these below, just thought I’d bring up what this game may not be doing, or should be doing, outside of what you’ve already established as a severely under developed examination of humanisation in one of the greatest threats to the human character – a war. Are there… Read more »

It’s the same game with the children and a few other things added in. If you’ve already played the original, my guess is that this is basically the exact same game plus a couple of tweaks.

I’m a little confused. This is an “expansion” right? Is it the same game that came out in 2014 with added children, or is it separate to the main game?