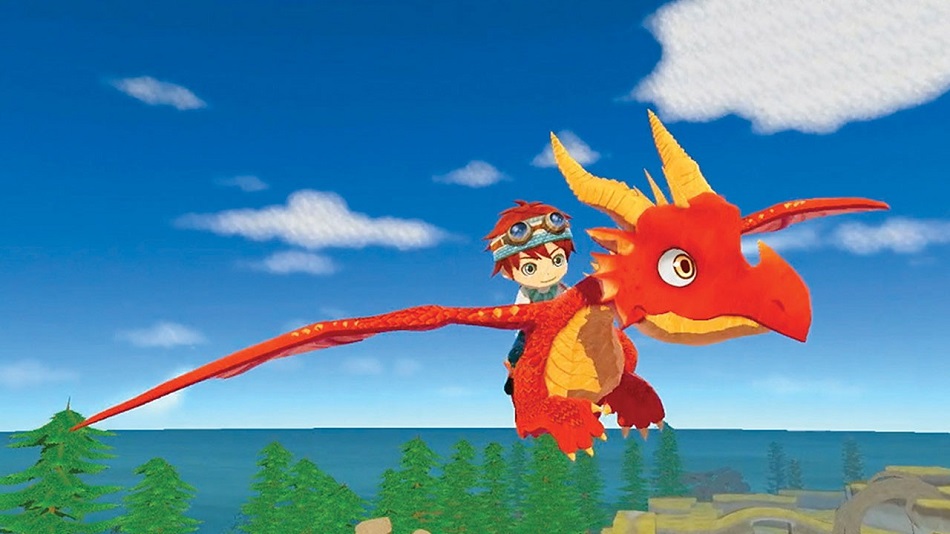 The subject of this installment: Little Dragons Café, developed by TOYBOX, Inc. and published by Aksys Games.

Little Dragons Café is the latest effort from Yashuiro Wada, best known for his work on Harvest Moon. The premise is that a pair of twins live in a house/hotel/café run by their mother, but she falls ill, so it’s up to them to keep the place running. At the same time, it’s revealed that their mother is actually half dragon, so they have to take care of a small pet dragon in order to help her get better. I’m not sure how that logic works but… OK.

This lightweight third-person sim-ish title starts off promisingly, but it runs out of steam thanks to a shallow design and a brutally slow pace.

To give credit where it’s due, I love the visual style — while it was a little strange and offputting at first, the unconventional “sketchy“ interior details and simple, colorful graphics grew on me. 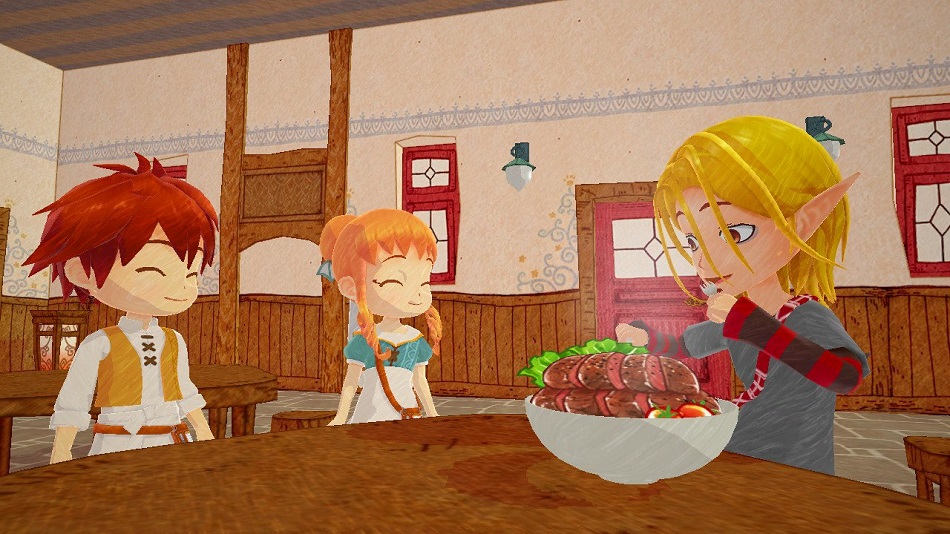 The writing is solid, as well. I’m about 12 hours in at the time I’m writing this, and although there hasn’t been a ton of dialogue so far, the cast of characters is appealing (although the one I refer to as “shitty Link” seen above can jump off a cliff) and the heart of Little Dragons Café centers around meeting people who come to the café with problems that get solved by cooking.

Unfortunately, despite those things in the ‘plus’ column, the lack of structural depth and repetition sinks it.

Every morning the player wakes up and goes into the world to gather ingredients for the café — sugar, fruits, vegetables, fish and anything else that might go into a dish. The player simply walks to a glowing gathering point in the environment, clicks a button, and goes on to the next point. Nothing more to it, and it has to be done constantly. 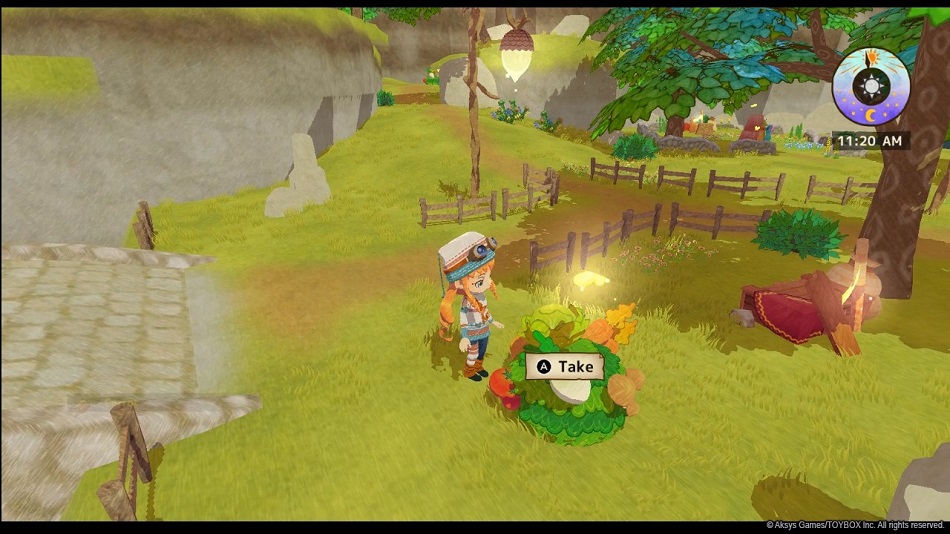 While gathering, the player will pick up “fragments“ of a recipe. So, I guess, someone is out there ripping up cookbooks and scattering bits of pages across the world? Regardless, the player has to find four pieces of the same recipe before being able to make it, which was a bummer – it’s just more simple collection. Being able to experiment or create my own dishes would’ve been welcome.

Cooking is done via a brief rhythm-esque minigame which involves pushing buttons at the correct time. The better the timing, the better the dish.

Once the ingredients have been collected and the dishes prepared, a handful of people will come into the café and place their orders. There are NPCs who staff the joint and do all of the work, but they occasionally slack off and the player must give ‘em a nudge to get them back into action. It’s interesting the first couple of times and the feeling of being a supervisor watching the floor is neat, but it doesn’t get any deeper. 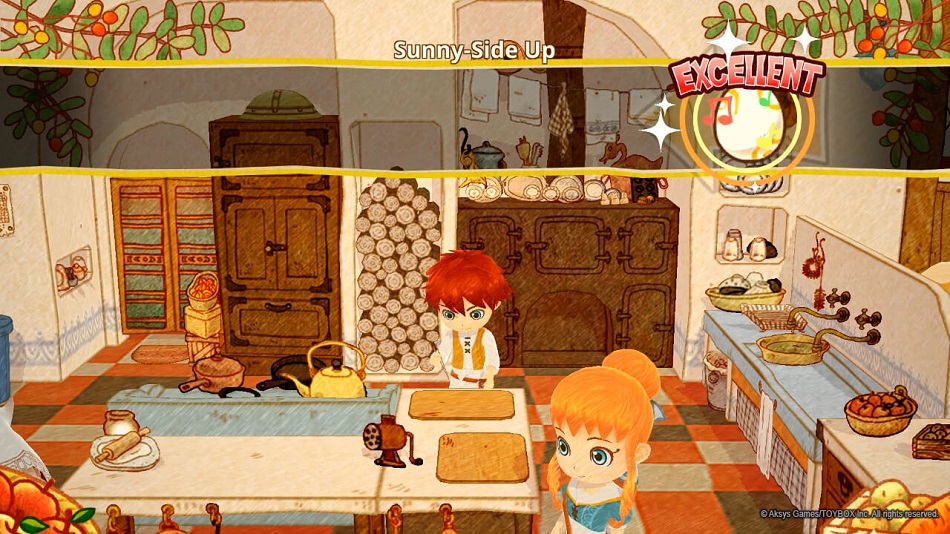 Once this cycle has been learned by the player… that’s it. Go out into the world and collect ingredients every day, supervise the restaurant, and do it again the next day. It becomes grindingly repetitious before long, and doing these things didn’t make me feel like I was working towards anything, improving a skill, or learning… It was just a lot of doing the same thing over and over – which, honestly, might have been fine if the story moved a little quicker. Sadly, it’s got all the speed of chilled molasses.

Like I said earlier, the writing is actually not bad, but Little Dragons Café has an insanely slow pace. It takes what would be one cutscene from any other game and breaks it up into a dozen pieces. The player can only get one piece a day, which means doing the gathering and the restaurant work twelve times (or more, if the player messes something up) in order to get one brief story.

It’s an absurdly lethargic pace, and seems intended to drag the game out for longer than it deserves to, given the shallowness of the design and how quickly it runs out of new ideas. I was interested in seeing where the story would go, in meeting new people at the café, and also in spending more time with the baby dragon (which is of so little consequence that I didn’t even bother to mention it here) but I couldn’t get past how much busywork the game was asking me to do — it felt extremely disrespectful of my time and not worth the investment.

Little Dragons Café is on the right track. The ideas are great, the cast was appealing, I like the style, and there’s merit in the idea of running a restaurant. However, in its current state it feels like a half-finished concept that got sent to retail before it was ready. I would be very interested in a deeper, more polished sequel, but in its current state, I’m going to leave this café and take my food to go.