So last night I got home from work and I was putting my key in the door when I felt like something was a little off. I looked around the patio and it took a minute before I realized that my son's wooden chair was gone. Stolen.

It wasn't a fancy thing, basically a handmade chair made to be just the right size for a child no more than five or six years old. It was originally made by my son's great grandfather, who is now deceased. He passed away before they ever had a chance to meet, but my mother-in-law had brought it as a gift when she came to stay with us, and my son was thrilled to have it. He sat in it nearly every day during the summer, blowing bubbles on the lawn or just chilling out when it got shady.

I never thought that it looked especially valuable, and we've had other things left out that have never been touched, so it didn't occur to us that someone would come by and steal it—especially since it was made of real wood, it's much too heavy to just grab and go. If I had thought for a moment that someone would be tempted to take it, we would have taken some precautions, but it just didn't seem like a danger. That's what we get for being a little too trusting, I suppose.

The terrible thing is that it must've been stolen by someone who had walked by our place at least a few times. Someone casually driving by wouldn't have noticed it, and like I said, it was too heavy to be taken as a spur-of-the-moment snatch. The only thing that makes sense is someone saw it as they were passing our place on foot and then came back with a vehicle… I'd be willing to bet any amount of money the theft was premeditated. Even worse, thinking that someone with ill intent had been standing right outside our door gave my wife and I the chills, and made us both feel a little less secure in our own home.

Although it's a real loss, the chair can be replaced. That good, homey feeling that's now diminished? Maybe. Maybe not.

Now, time for another quick rundown of what I've been reading…

Screamland, The Walking Dead and The Sixth Gun… All still great. 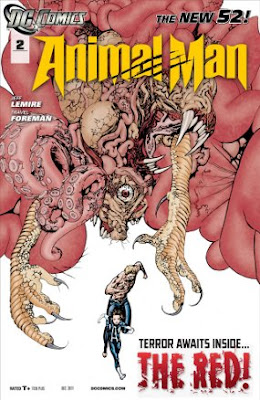 Animal Man #2. Despite not having much experience with that character in the past, the recent first issue made a strong impression on me, and I'm quite happy to report that this one was just as good. The artwork by Travel Foreman is a great mix of mood and detail, and the plot by Jeff Lemire is still going strong. Although this particular issue moves perhaps a little too fast for my taste, the events reveal a new depth to the powers shared by Animal Man and his young daughter that are quite intriguing. So far, this is certainly one of the best of DC's New 52.

Deadman #1. Another DC character that I've heard of, yet have never read, I was quite pleased with this particular relaunch and immediately added it to my monthly list. It's a great first issue in that it clearly sets up the character in a very clear and concise way for those (like me) that have no knowledge of any backstory. Providing a good starting point seems to have been a problem for several of DC's other new #1s, so I'm glad to see that this one knew what it was doing. In a nutshell, Deadman was a colossal jerk in life and now must atone for it by jumping into the bodies of people who need assistance. By helping them with their problems, he earns his way towards a more positive afterlife—it seems to me a lot like Quantum Leap, with just a slightly different spin. Since I was a huge Quantum Leap fan, that's perfectly fine. 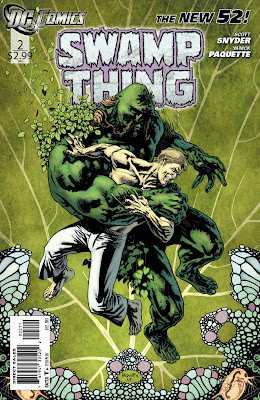 Swamp Thing #2. I wasn't completely satisfied with Swamp Thing's first issue of the reboot, and the second issue has flushed it even further down the crapper. Rather than giving the character a clean or mostly-clean slate to work from, the writer seems intent on keeping most of the character's convoluted, multi-series backstory and retconning it to fit this new beginning. It's confusing, it's way too talky, and it comes off like utterly contrived stereotypical comic book crap. Throw in a standard "red rot monster vs. green plant life" theme (YAWN) and I've seen all I want to see. I will not be picking up issue #3. 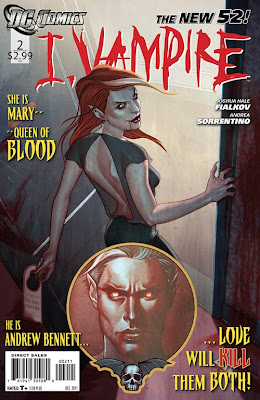 I, Vampire #2. Another misfire. The first issue was very loose and impressionistic, but I decided to give it the benefit of the doubt in hopes that the story would start to make more sense, but that isn't the case. This second issue was even more abstract with scenes that make little sense, and a plot that appears to jump back and forth in time. As a reader, I have no idea who these characters are, exactly what they are about, or even what the setting is. It seems like the elements for something interesting are here, but it's been so poorly conceived that it's all a stinking mess. I'm quitting this one as well. 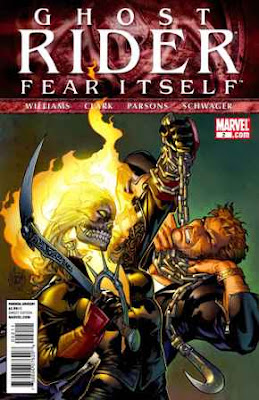 Ghost Rider: Fear Itself #1, 2, 3, 4. I used to be a huge Ghost Rider fan for many years, starting with the original Johnny Blaze stuff from back in the '70s, and I was pretty okay with the later reboot starring Danny Ketch, but things got too silly after a while and I had to bail. It seemed to me that the mythology was getting to complicated and too ridiculous, and I just couldn't swallow it anymore. I was really hoping that this new series would be a fresh start for the ol' flaming skull, but despite the abilities transferring to a new female rider, it's still a pile of crap that needs to be blown up and rebuilt from scratch. I'm not even going to get into any of the details, except to say that Ghost Rider is now a joke to me, and I've got no patience for angels, devils, his personal crew of familiar faces, and a whole host of other elements that serve only to detract from what should be a fairly straightforward superhero. I bought all four issues to read at once, and after having done so, I realized that I only needed to buy one to find out that it still isn't any good.

And things are not off in Blaze’s Ghost rider? I found Ketch’s ghost rider to be refreshing and damn near awesome the 3 brothers bit with the medallion of power made it for me. The ending or such as it was was rather weak that much I will give you.

The new stuff is pure BS however Ghost rider 2099 is a geeks dream :X.