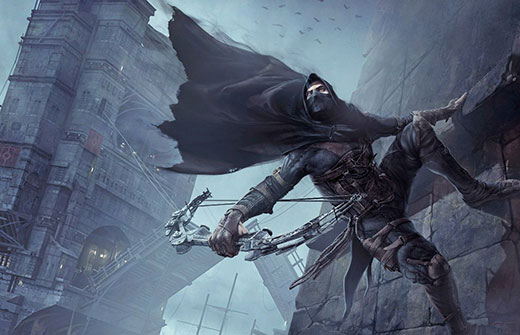 LOW Too many illogical, immersion-shattering instances of weirdness.

WTF Where the hell does Garrett carry all the stuff he swipes?!?

Although I've heard them spoken of with great reverence over the years, I've never played the Thief

games before this reboot from Eidos Montreal, and as such, I didn't have many expectations for it to fulfill. I'm curious to see how the old-school fans receive it, but I found this installment to be an engaging stealth experience, but also one that's brought down by more than a few issues that need attention.

The player assumes the role of Garrett, a master thief living in a decrepit, corrupt city. As the game begins, he's with a fellow ‘blackhand' on a risky heist, and everything goes south. Inexplicably, Garrett wakes up a year later with a hazy memory, and discovers that not only did his friend die that night, nefarious things have been afoot while he was out of commission…

First things first — although I'm well aware that Thief existed long before Dishonored, it's inevitable that parallels will be drawn. It's impossible not to see similarities. They both involve sneaky first-person action, the cities feel similarly nasty in tone, their upper classes can't be trusted, they both have a memorable brothel level, and so on. However, I found that Thief ‘s formula gelled together in a more satisfying way, and clicked with me in a way that Dishonored never did.

For most of the adventure Garrett will creep his way through intricate, discrete levels which are located around a large, central hub world. The hub is incredibly detailed and complex, with many secrets to figure out and even more things to steal. The levels themselves are equally great, with many multiple paths to each objective, mini-objectives and loads of opportunities to either get the jump on guards or sneak by unnoticed. Players who like to take their time and search every nook and cranny will find the effort to be richly rewarded, not only with shortcuts around difficult areas and other similar surprises, but by cash money.

Since the game is called Thief, of course the player will be stealing things. Usually it's golden spoons off of tables, or nice pens off of desks. Cracking safes and finding bigger stashes takes a little more legwork, and there are also pilfering sidequests available from a local ‘businessman'. Money in the game is used to buy supplies or ability upgrades, and extra-special pieces are put on display in the clock tower where Garrett lives.

Mechanically, Garrett is a smooth operator, with plenty of options at his disposal. He can swiftly dash between shadows or climb up certain structures, and his quiver holds a variety of special arrows —  a water arrow will douse open flames to create darkness, explosive arrows can take out several enemies at once, rope arrows can be attached in special places to allow vertical travel, and more.

Players who like to take the extreme stealth approach and ‘ghost' their way through games will be treated to as much of that as they like, and those (like me, I admit) who have their patience tested by nosy guards can always resort to more violent methods in a pinch, although Garrett doesn't survive long in open combat. Straight-up fights lead to quick deaths, so quiet back-attacks and arrows in peering eyes are the order of the day.

By generally allowing for both styles (although stealth is heavily favored) Thief caters to as many people as it can. This is further evidenced by the wealth of options which can customize the experience and challenge. For example, I'm no fan of vibration or motion controls, and the game permits all of it to be disabled while compensating in other ways. Going further, the heads-up display can be greatly modified and other settings can be tweaked to skew more hardcore or less so. Want an ironman one-life, no-powerup run? No problem. Want to have clear objective indicators and a bit more handholding? Thief can do that too.

As a stealth title Thief gets quite a bit right, but it doesn't nail everything. Sadly, it feels somewhat trapped between the last generation and the current one. For instance, it was disappointing to find that the world is broken up into sections rather than being a true go-anywhere landscape. The lip-synch is hilariously off, framerate problems occasionally pop up, and the graphics in general aren't impressive.

Those aren't issues I'd ordinarily get hung up on, but they're present on top of the other, larger problems Thief has — strange decisions and obvious omissions that disrupt immersion pop up almost immediately.

The biggest choke point for me was that the lacking behavior of NPCs. In one egregious instance, I was following a man who got into an argument with some guards. The guards told him to leave, so I planned to follow him and strike. As I was waiting, it dawned on me that although the argument was over, no one was actually moving. The man simply stood face to face with the guards, and after the dialogue had ended, they all froze as they were and did not move again, ever.

Thief displays many other problems with believability apart from the NPCs. I often found myself in need of a bottle to throw for a distraction, but the game only allows players to pick up specific bottles, and nothing else – no bricks, rocks, or anything of the like. That bottle literally rolling around by Garrett's feet? Nope. Can't throw that one.

Likewise, too many doors don't have knobs and the rooms they're attached to don't seem like logical spaces. There are a staggering amount of incongruous cabinets to hide in, and climbable sections of wall are displayed as painfully-obvious blue grates. Despite being able to leap huge gaps, Garrett can't jump over a tiny patch of glass right where the devs know I'll be walking. Oh, and that noisy object placed on a box that needs to be climbed? Garrett can't silently move it, or pick it up at all. In light of how much Thief gets right, this noticeably limited level of interaction was doubly disappointing.

On the whole, Thief

is a worthwhile entry into the stealth genre and genuinely better than many I've played, but it's hard to ignore the number of obvious things that it whiffs. These missteps diminish the sense of being a nocturnal superthief, and despite the fact that I enjoyed my time in Garrett's black leather boots, I never stopped seeing the areas where Thief could have, and should have been better. Rating: 7.5 out of 10

Disclosures: This game was obtained via publisher and reviewed on the PS4. Approximately 12 hours of play were devoted to the single-player mode, and the game was not completed at time of review. (The reviewer is still playing.) There are no multiplayer modes.

Parents: According to the ESRB, this game contains: Blood, Nudity, Strong Language, Strong Sexual Content, Use of Drugs, and Violence. Parents, this is not one for the kiddies. The level of violence is high and Garrett will (potentially) be killing or be killed by human guards and other things. There's plenty of salty language to be heard, and the brothel level contains two of the most graphic sexual scenes I've ever encountered in a console game. Grownups ONLY.

Deaf & Hard of Hearing Gamers: You'll be at a distinct disadvantage here. Although dialogue is generally subtitled, there are many times when audio cues from nearby guards aren't represented by any visual signals. It's quite easy to stumble into an enemy or be unaware of guards ahead without the audio information, so players with hearing impairments can expect quite a few ‘die and retry' moments.