At this point, I'm sure that anyone who cares has already seen plenty of coverage on Microsoft's new machine, although there are many, many questions that will remain unanswered until E3.

In any event, I was on-site for the big reveal, and if you'd like to see my particular take on things, I covered it for Wired. You can click to read my interview with MS veep Phil Harrison, and you can also click to read a general narrative about what it was like to be there on the big day.

In other linky news, the new @Gamecritics Podcast is now available for your listening pleasure. Hosted by our thoroughly British man-about-town Sinan Kubba (@Shoinan), the usual crew discusses the most overrated and most underrated games of the generation. You may recall that I was asking Twitter for input on this subject several weeks ago, but the original recording got delayed for various reasons. If you were one of the people who chipped in some votes, here are the results you've been waiting for. 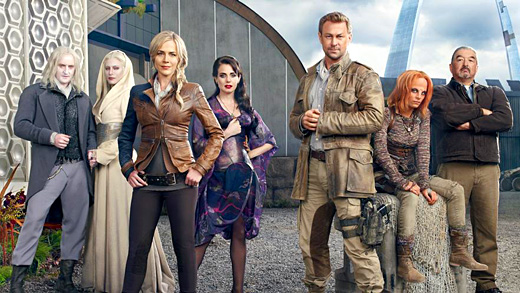 Although I didn't originally intend to cover it, I ended up with the task of reviewing Defiance on 360—a third-person shooter MMO with links to the new program currently airing on SyFy.  I hadn't heard anything good about it and I'm not someone who plays MMOs, but that's the way things go sometimes.

As preparation for the review, the wife and I sat down to watch the first couple of episodes of the show for background, and we were pleasantly surprised. Although I don't think anyone would say that it's stunningly original, the writing was good and so was the premise: eight alien races take a one-way trip to Earth in search of sanctuary, and their arrival causes planetary upheaval. Thirty years after these events, the world is a very different place and the show is about people trying to get along and make a place for themselves. It's very reminiscent of a frontier Western, except the bad guys have laser guns and the good guys are scaly.

With that positive experience under my belt, I moved onto the game, and I was surprised to find that it was actually… a great time.

To make a long story short, Defiance (the game) is a third-person open-worlder that has a standard single player campaign and a whole lot of supporting content. On top of this comes the MMO layer—players can come and go as they please, joining you to help out if they are so inclined, or simply driving on by if they have another goal in mind. 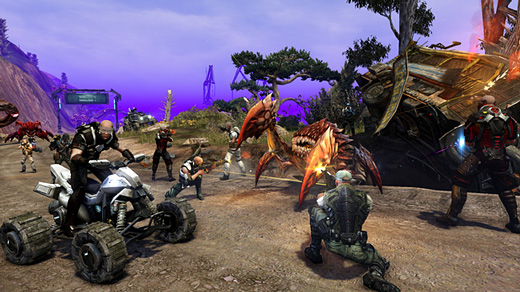 It's all very freewheeling and loose, with a big focus on fun and action. Players are free to swap between any weapons they like, there are tons of enemies to shoot, and it's pretty fantastic to be going about your business and then suddenly find yourself with three or four friendlies pop up as backup after they saw that you needed some help. As soon as things settle down, everyone goes their separate ways and there's no fighting over loot or messing around trying to coordinate the next quest.

The game also offers continuous events called "Arkfalls," which tie into the show. Basically, there are tons of spaceships drifting dead in orbit, and when one of them crashes, there are resources and items to be had. The game signals when something is up for grabs, and every player in the area rushes towards it to defeat the swarms of bad guys protecting the goods, working together towards a common goal. It's a blast to have fifteen or twenty players coming together in ad-hoc fashion to beat back a swarm of bugs—the fighting is frenetic and the screen is filled with activity.

I've heard some people say that they've had problems with the game, but it's apparently been patched several times since release on April 2 of this year, and I haven't had any issues apart from the occasional minor hiccup. I'm guessing that the development team has been working overtime stabilizing things and polishing things up, and I've got no complaints from a technical perspective.

Defiance is currently free-to-play via Steam during the holiday weekend, and the 360/PS3 versions are on sale. There are definitely some rough edges to the experience and I'm not crazy about a few of the MMO aspects, but the core experience is super solid and it's been nothing but fun to play once I got the game properly installed and figured out what was what. Recommended!