Heard of them? Know what they are? Where to find them, and more importantly, how to play them? If you're like most gamers out there, then the answer is…

When the New Xbox Experience dashboard launched a while ago, there was plenty of chatter about the goofy Avatars and the revamped, graphically-intensive presentation of the dashboard, but neither of those things was as interesting or as important as one of the most-overlooked features that launched right alongside them: Community games… or at least, that's what they were called at the time, anyway.

An expansion of Microsoft's XNA Creator's Club initiative, the Community Games area (now known as Indie Games) is a place for creative individuals, independent developers and small studios to have their work seen by the 360 audience at large. Anyone who thinks they've got a great idea can enter a submission through the Indie process and eventually have a game ready to be sold and downloaded to hard drives all across the world. It's a great opportunity, and the only program of its kind to be available on a home console. Unfortunately, Microsoft has given this area of Live very little attention, and despite being an incredibly exciting and innovative feature, very few players know the first thing about it.

With any luck, this article will help change that.

Listed below are some of the finest titles that the Indie tab has to offer. If any (or all) of them catch your eye, turn on your 360, go to the Marketplace tab and then scroll upwards until you find Indie. All of the games in this article can be found there, each with a brief trial period, preview screenshots, and short descriptions of the gameplay.

Keep in mind, these are titles produced by incredibly small teams or even lone individuals. Although they may not be able to keep pace with the latest high-gloss blockbusters, it's clear to see that they make up for it with originality, creativity, and pure heart.

If you care about games the way that I care about games, these are exactly the kind of people that can and should be supported—after all, even the most successful developers come from humble beginnings. They've all got to start somewhere.

In no particular order, round one of the best Indie games: 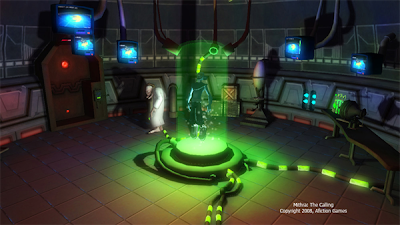 An inspired work placed squarely in the Adventure genre (think of the recent Monkey Island, or Sam & Max) Mithra starts off with two captive aliens in a cell. One tall and lanky, the other barely more than a blob, the pair work together to escape their confines in a mysterious lab.
Featuring fully-realized 3D graphics, voice-overs, and appreciably logical puzzle design that wisely avoids all of the "how the f**k was I supposed to figure that out?" pitfalls of so common to the genre, there's a lot here to like. In addition, it features a faux-Achievements system and extras to unlock.

If there is a downside, it's that the game is over too soon. Although it's only the first installment in a larger series, I could've easily devoured another few hours of this standout game. 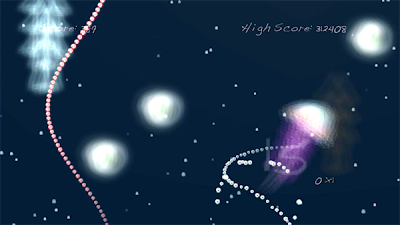 I have to admit that the first time I played Machiavelli's Ascent I had absolutely no idea what was going on—all I knew was that the player takes on the role of a jellyfish, which is not exactly something that you come across every day. After a few minutes of stumbling around, it all clicked.

Starting at the bottom of the ocean, the player's goal is to get the jellyfish to ascend as close to the surface as possible. Controls are totally streamlined, utilizing only the left and right triggers to shift the creature across the screen. Progress is made by tagging bubbles while traveling vertically. Keep popping bubbles and the jellyfish keeps rising. Miss one, and there's almost no hope of recovery.

Requiring much finesse, this is certainly a game that will keep a player coming back for "just one more try". 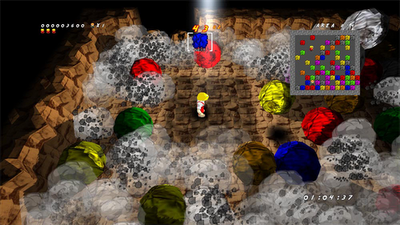 Offering an insane amount of content, CaveIn is best described as a perfect blend of the Action and Puzzle genres. Within a large cave complex, boulders come in a variety of colors. The player moves their avatar around each area and eliminates them by matching three of the same hue. The goal is to rescue fellow miners trapped behind rockslides and in distant corners of caverns.

Although the formula is simple enough, what gives this game legs is the fact that there are several different types of levels. Some are simple boulder-matching, some involve precision aiming with a cannon, others are a matter of finding the correct route through a maze in a hurry, and so on. The sophistication of the level design here is notable, and with just a little work this game could easily have been sold as a full-on Arcade game, or even a retail DS/PSP title. 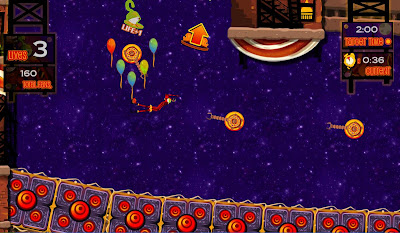 One of the first Indie games I fell in love with, CarneyVale Showtime was the title that sold me on the concept of player-produced games on 360 in the first place.

Within just a moment or two of playtime, the top-tier quality of the production is evident. The graphics are solid and attractive, level design is masterful, and the concept is unique enough to stand head and shoulders above most of the competition—take an acrobatic rag-doll clown, fire him out of a cannon, and toss him vertically via strategically-placed grippy claws.

It's a little hard to describe, but the kinetic, physics-based gameplay is a model for just how fantastic these Indie games can be. 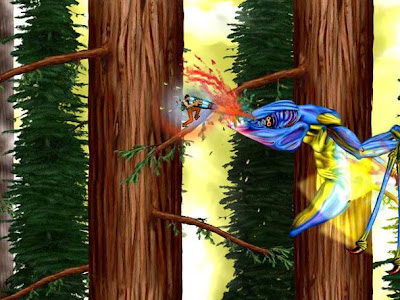 The best thing to hit the side-scrolling Shooter genre since Konami's seminal Contra series, Weapon of Choice showcases a clear love of the subject material and insightful understanding of what makes it tick.

Taking a long-established formula and making it fresh and vital again, this title implements a number of innovations like giving the player the chance to avoid death at the last second, or requiring that an "extra man" physically be rescued before he's available for use. Toss in staples like completely over-the-top weapons and bulbous, drippy aliens, and this game is a total win any way you slice it. 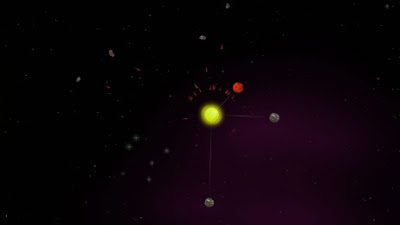 Artistic, celestial, and most of all, minimal, Solar is one of the more unusual offerings. In this title, players control a star floating around the universe. One mode is simply a sandbox, giving people free reign to go where they please without fear of any consequence. For people wanting a little more structure, there are a series of challenges that can be completed. Knocking the first few out opens up some unlockable options that modify different aspects of the game… everything from altering the gravity to increasing the rate at which life develops on the surface of habitable planets. Certainly one of the more esoteric creations, it's got a flair all its own. 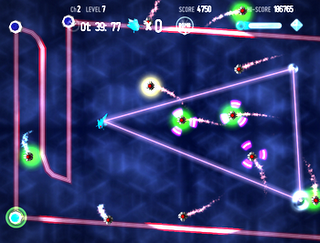 Another top-quality creation that would certainly find success in more mainstream channels, Trino is another interesting blend of Action and Puzzle. In this effort, the main character is a strange bio-mechanical oddity that has the ability to create triangle-shaped traps. Capture a variety of enemy creatures within these traps, and move on to the next level. It sounds simple enough, but things get hectic quickly and the enemies have a variety of behavior patterns which require a lot of on-the-fly thinking.

There are a good number of levels to get through and the player's creature powers up at certain intervals, granting the ability to lay more than one trap at a time, in addition to a screen-clearing superbomb. Like a strange hybrid of Geometry Wars and Tempest, Trino excites. 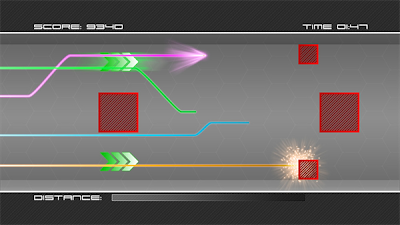 The essence of minimalism, StreamLine is literally about two lines racing to a finish. The speed at which the lines move is constant, although it can be altered by hitting speed-up patches or getting caught on environmental obstacles. There are only a handful of levels, but there's something hypnotic about the hyper-stylized visuals and pumping music. The stripped-down play acts on something deep within the brain, almost inducing a trance. If I advocated mind-altering substances (which I don't) I'd recommend taking some before playing. However, it's still a spicy little morsel even when stone sober. 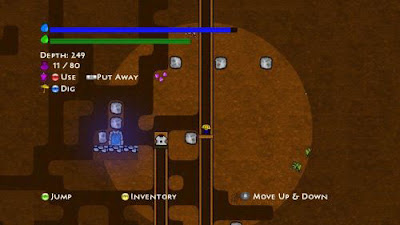 An experimental title that focuses solely on relaxing, self-directed play rather than establishing pre-set goals or putting pressure on the player through use of time limits or enemies, Miner Dig Deep is about exactly what you'd think it would be about… there's a mine, a miner, and he digs deep.

The beauty of this title is that it offers clear sandbox elements without adhering to what modern players think of when the term is commonly used. Instead of an open-world city peppered with icons representing preset missions, the player is given free reign to dig into the earth as they see fit. The only goal is to unearth gems and other precious things, exchanging them for money to buy better tools and equipment.

It might sound a little dull, but it's an incredibly addicting experience and one which really thrives without many of the elements that are common to what most people see as traditional games. The simple, unassuming graphics are a great fit for the distilled essence of gameplay, and the elegance on display here is something that I think more games could certainly benefit from.

Thanks for reading. New Indie games hit the Xbox Live Marketplace every week, so check back in the future for another installment of the 360's best.

The article is useful for me. I’ll be coming back to your blog.

I bought Trino, Weapon of Choice and Mithra after your recommendation.

Thanks for posting this. I’ve passed it on to all my friends and I hope I’m firing up the xbox to try them out!

Stuff like this is what will probably cause me to finally cave and buy an Xbox.