The End Is In Sight 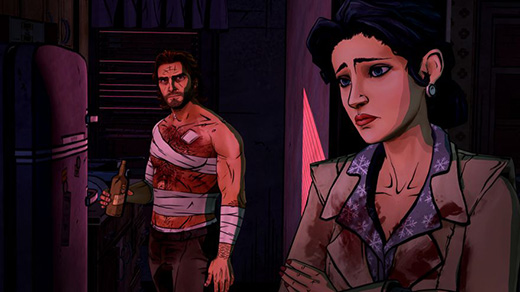 HIGH Telling Bluebeard to f*** off, and letting loose at the pawnshop.

LOW Some of the dialogue choices didn't turn out how I expected.

The fourth episode of Telltale's The Wolf Among Us

is now available. Titled In Sheep's Clothing, the murder investigation that kicked the series off continues to unfold, and the Big Bad Wolf reveals ever-darker, ever-nastier aspects of the Fables world.

As is my norm when reviewing story-based games, I'll refrain from providing specifics. Discussing plot info here would be incredibly spoilery, especially since it's a murder mystery. However, I can say that with this installment, players can look forward to big reveals on what the guilty party has been up to.

During this 90-minute chunk of noir, Bigby will again decide between two different locations to investigate, and players will also get the ‘I've got no idea how to answer this' choice from episode one thrown in their faces. Again. (Honestly, I felt like that situation with Beauty was unfair since there was no context for it, but hey, life goes on.)

Otherwise, there's not much to say. The story is drawing to its natural conclusion, and this episode flew by as illuminating information fell into place. Not much happens otherwise except for one good fight at a pawnshop. I don't want to say that Telltale was intentionally stalling or drawing things out here, but it's just a lot of setup for the finale, and I got the sense that perhaps four (or even three) chunkier episodes might have felt more satisfying.

Speaking of satisfaction, the episodic experiences in both Wolf and Walking Dead are feeling leaner and less interactive as we go along, and I'm concerned that puzzle elements are going to drop out of Telltale's future projects entirely. Frankly, I'm not sure that their elimination is a good thing. Remember the detective work and deduction Bigby did in the first episode of Wolf? It was fabulous, but we haven't been treated to much since. Choosing dialogue and QTE-ing through an occasional fight scene are great, but I'm starting to feel starved for more to do.

As far as complaints go, the subtitles during the scene in Snow's office were a mess thanks to the text focusing on background chatter instead of the dialogue that's happening right in front of the player. It was impossible to follow without audio, and that was an incredibly bad call on the part of whoever subbed it.

Also, it might just be me, but there were two times when the choice I intended didn't happen—once because the dialogue selected didn't lead to the expected result, and once because I had no idea what action the icons shown to me meant. I don't intuitively know the difference between a symbol of an open door and an open hand on a door, so I was left to guess which one meant what. More clarity would be appreciated.

Technically, the problems I've written about before still apply. The loads are still long, the framerate sometimes chugs, and the QTEs still feel awkward when switching movement to the right thumbstick instead of keeping it on the left.  I'm not trying to sound too negative, though. While there's room to improve, The Wolf Among Us

has remained stylish and enjoyable since the beginning, and I'm eager to see how it all ends. Rating: 7 out of 10.

Parents: According to the ESRB, this game contains: intense violence, blood and gore, sexual themes, partial nudity, strong language, and use of alcohol and tobacco.  Although it might be tempting to have little ones sit next to a parent playing the game due to the fairytale nature of the story, don't be fooled—the game is aimed squarely at adults thanks to some graphic instances of violence (fights, bloody gunshots, etc.), plenty of salty language, and an overall tone that's very dark.  Nothing about this game is appropriate for kids, so please keep them clear and play this one after bedtime.

Deaf & Hard of Hearing: for the most part, there's no problem—almost all of the dialogue is subtitled and in different colors to indicate which character is speaking. However, there's one scene where the developers try to subtitle a background conversation, and in so doing, they make it completely impossible to follow the conversation the player needs to be listening to. I wouldn't be surprised if players depending on subs get totally lost in that section.