A Wolf in Man's Clothing 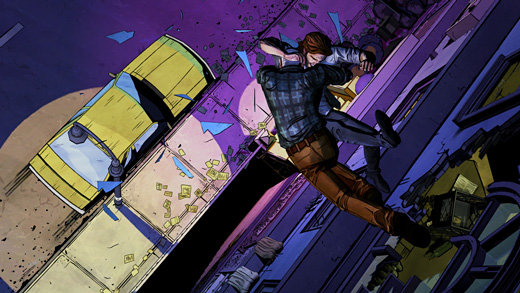 WTF How in the world are they going to resolve this cliffhanger?!?

After the amazing success Telltale found with The Walking Dead, many wondered how they would follow that act, and whether they'd be able to match the same level of quality. Their next offering is now here, and wisely, they decided to do something different instead of going straight into a second season of zombies.

This change of pace was a smart decision—not only does it give Telltale time to properly craft the next installment of The Walking Dead (and what a hard act to follow!) it also proves that its success wasn't an accident. The Wolf Among Us

shows the developer at the height of their powers and still paving the way for episodic game design.

The Wolf Among Us is based on Bill Willingham's award-winning Fables comic book series and is structured the way The Walking Dead was: the story is broken up into five parts released separately, and one continuous narrative runs between them. A player's actions in one segment will affect relationships and events in the ones that come after, and multiple paths through the adventure can occur based on what's chosen.

The setup of the game is somewhat complicated, but essentially, all of the famous characters from bedtime stories and fairy tales are real people in a hidden society that exists side by side with humanity. Episode One—Faith puts the player in the shoes of Bigby Wolf, the famous beast known for terrorizing Little Red Riding Hood and the Three Little Pigs. However, he's no longer the villain. Instead, he's been recruited as sheriff to help keep the peace and ensure that the existence of these fables remains a secret.

For those who haven't read the comic, I'm sure that this premise sounds silly or absurd, but the source material absolutely commits to the concept and sells it by creating rich characters with interesting twists. Telltale does the same here. For example, Snow White is a princess without a kingdom, and she holds down a job in the mayor's office. Beauty and the Beast make an appearance, but they're having marital problems, and so on.

Bigby himself is ripe with potential in that he's struggling to reconcile his past misdeeds with the person he wants to be now, and the residents of Fabletown aren't very inclined to forgive him of his transgressions. The line between playing him as the wolf that he was or the man that he's trying to be shows beginnings of a great character piece, and I expect this to deepen as the series continues.

While the myths-made-reality concept of The Wolf Among Us isn't as instantly relatable as surviving a zombie apocalypse might be, the writers do a great job of boiling the source material down and explaining just enough of this unusual world to establish the setting without overwhelming the player in unnecessary detail. It might be a bit of a leap to accept that one of the flying monkeys from The Wizard of Oz is a boozy librarian, but Telltale makes it easy to buy into the fiction. 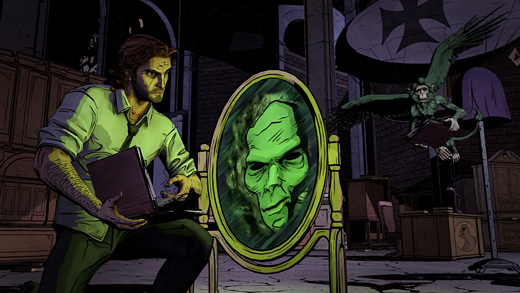 In terms of the actual plot, a murder occurs near the start of Episode One and it falls to Bigby to not only find out who committed the crime, but who the victim was. As such, The Wolf Among Us is essentially a noir detective story with fantastical trappings.

As he makes his way to locations that are related to the murder, Bigby will have to use his powers of observation to put clues together, to come up with leads, and suss out who's telling the truth. Although the developers are fairly obvious when displaying vital pieces of information to the player, it's still a pleasant challenge to try and remember what was seen, in addition to correctly making the right assumptions. Catching someone in a lie or trying to convince a hostile person to cooperate isn't brain-bustingly difficult, but it does require a fair amount of concentration and feels quite satisfying when the pieces come together.

It's not all about brainpower, though. During their investigations, players will encounter some QTE event sequences which have been polished and elaborated upon since The Walking Dead. Although similar, they're now more dynamic and deeper, and give a better sense of action actually happening. When fighting off an attacker in a small apartment, the player will have to dodge, strike when opportunities arise, and even make choices in the middle of battle—would it be better to throw the angry bruiser into the sink, or slam him into the bookshelf? It's exciting stuff.

In terms of production, Telltale returns to the semi-cartoonish style seen in The Walking Dead, but they have improved upon their craft with more detailed characters and better animation. The voicework is still rock-solid, and the general art design employs a high-contrast color palette which is strikingly beautiful. Games like Wolf are a perfect example of why constantly pursuing ever-higher levels of photorealism is misguided—individual drops of nose sweat with realtime light refraction may thrill tech-heads, but there's a lot to be said for the kind of stylized artistry on display here.

Unfortunately, not every aspect of the experience is polished. Playing on the Xbox 360, I encountered frequent chunky load times, and more than a few instances of stuttering frame rates. It's not a constant problem, but it's a shame that the game doesn't run more smoothly than it does because technical hiccups like these disrupt the immersion that the other aspects are working so hard to create. I'm also hoping that Telltale has ironed out some of the savegame bugs that cropped up in their previous work. Of course it's too early to tell if that particular issue will return, but I'll be paying close attention to it as the series progresses.

Technical issues aside, anyone craving more of the sort of stuff Telltale was serving up with Lee and Clementine would be well-advised to check into The Wolf Among Us

. Fending off the undead and struggling with the difficulties of post-apocalyptic life may not be a part of the current formula, but great characters and strong, narrative-driven gameplay certainly are. If this first episode is any indication of the quality that the remaining episodes will offer, it's safe to say that the good people of Telltale have another hit on their hands. Rating: 8.5 out of 10.


Disclosures: This game was obtained via paid download and reviewed on the Xbox 360. Approximately two and a half hours of play were devoted to the single-player mode, and the content was completed. There are no multiplayer modes.

Parents: According to the ESRB, this game contains intense violence, blood and gore, sexual themes, partial nudity, strong language, and use of alcohol and tobacco. Although it might be tempting to have little ones sit next to a parent playing the game due to the fairytale nature of the story, don't be fooled—the game is aimed squarely at adults thanks to some graphic instances of violence (fights, decapitation, etc.), plenty of salty language, and an overall tone that's very dark. Nothing about this game is appropriate for kids, so please keep them clear and play this one after bedtime.

Deaf & Hard of Hearing: For the most part, there's no problem. Almost all of the dialogue is subtitled and in different colors to indicate which character is speaking. However, I did notice that some information relevant to a line of questioning later was audio-only, and I noticed at least two instances where the subtitles were missing. None of these were huge problems, but they're there. In general, I feel comfortable in saying that the game is quite accessible for hearing impaired players.

The lack of interactivity in Telltale games, particularly from Back to the Future on, has always irked me.

I’m frankly a bit surprised to actually be reading praise of the use of Quicktime Events in a video game released in 2013. Do they not still basically boil down to the oft-repeated “press X to not die” functionality?

I’ve read elsewhere that this game is even less interactive than The Walking Dead was, at least in terms of traditional exploration and interaction with the game world. Is this not still basically a choose-your-own-adventure style interactive movie?

QTEs are just one tool in a developer’s box. Sometimes they work, sometimes not. With Wolf, they work.

As far as being less interactive, it’s a more focused experience but we’ll see how it develops over the next four eps.

IMO, it’s an adventure-style game with great writing, nice action and no absurd puzzles, so if that sounds like it’s not appealing, then it probably won’t win you over.