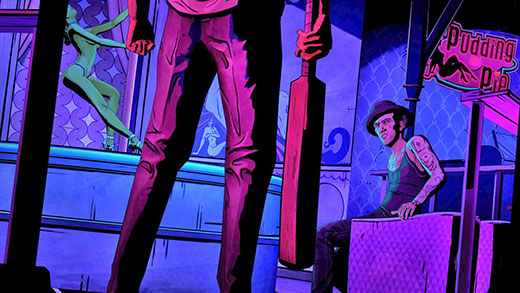 LOW That's the response I get for handling TJ so well?

The second episode of The Wolf Among Us

from Telltale Games is now available. Titled Smoke & Mirrors, it continues the murder investigation that kicked the series off, and takes the Big Bad Wolf to new corners of the Fables world.

As is the norm when reviewing story-based games of this type, I'll refrain from providing specifics since revealing any information would be spoilers of the highest order, especially since it's a murder mystery. However, what I can say is that the same level of quality displayed in the first episode continues here.

As mentioned in my breakdown of the first episode, Wolf's visual style is fantastic—the colors are neon-rich and eye-poppingly saturated, the sense of style is perfect, and nearly every scene is a visual treat. It's a joy to see something that's so visually distinct after being exposed to entire worlds of brown and gray in some other titles.

The writing and characterization are still strong, as well. As Bigby goes from place to place, the writers give him plenty of time to interact with other characters, and allow him to choose a range of temperaments in each scenario.  As for me, I dialed him back and played it cool with most of the people I ran into, and it generally paid off the way I hoped. There are also many opportunities to go rougher if so desired, and having that option is appreciated.

The other thing that I enjoy about The Wolf Among Us is that it actually does feel as though Bigby is doing detective work. While here's nothing brain-busting here, going to crime scenes and putting clues together is great. Players don't get to take on the detective role nearly often enough, and when they do it's rare that things click together so well. Wolf has a good flow to it, and this slow burn while piecing things together had no problem keeping my attention.

Honestly, I have no real criticisms of the content, but as for the technical side of things? Still unsatisfactory.

Playing on the 360, I found that the framerate often chugged, especially when loading a new scene. It happened so frequently and to such a degree, that I actually thought my console locked up a few times. I also had a few instances when my cursor was doing strange things—when I would navigate left, the cursor would go right, and vice versa. It didn't happen often, but the fact that it happened at all was bizarre. This content is so good that it's a shame Telltale doesn't have it running like silk, especially since it's relatively low-tech. Any money put towards polishing the programming for remaining episodes would be well-spent.

Although it may not sound like high praise to say that The Wolf Among Us: Smoke & Mirrors

is holding steady with the status quo, it's so stylish and enjoyable that I'm quite content to get more of the same. Bring on the next episode! Rating: 8 out of 10


Disclosures: This game was obtained via paid download and reviewed on the Xbox 360. Approximately 1.5 hours of play were devoted to the single-player mode, and the content was completed. There are no multiplayer modes.

Parents: According to the ESRB, this game contains: Intense Violence, Blood and Gore, Sexual Themes, Partial Nudity, Strong Language, and Use of Alcohol and Tobacco.  Although it might be tempting to have little ones sit next to a parent playing the game due to the fairytale nature of the story, don't be fooled – the game is aimed squarely at adults thanks to some graphic instances of violence (fights, decapitation, etc.), plenty of salty language, and an overall tone that's very dark.  Nothing about this game is appropriate for kids, so please keep them clear and play this one after bedtime.

Deaf & Hard of Hearing Gamers: for the most part, there's no problem.  Almost all of the dialogue is subtitled and in different colors to indicate which character is speaking.  However, I did notice that there was one section when a (possibly) significant music track played, and there was no written description of it. That minor issue aside, I feel comfortable in saying that the game is quite accessible for hearing impaired players.